Standard has more than a few ways to go wide, and the payoff cards you choose differentiate the contenders from the also-rans. 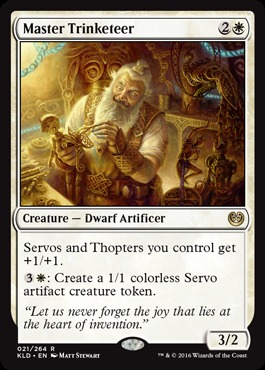 Master Trinketeer has barely seen the light of day. While clearly a Limited bomb, the Trinketeer rewards you for the easiest way to go wide in Standard. With so many great ways to make Servos, the Trinketeer threatens to grow your army quickly enough to punish an unprepared opponent. As a late-game mana sink, it pulls double-duty.

Servo Exhibition and Sram’s Expertise are strong ways to amass Servos. Spending 2 mana for a pair of creatures or 4 mana to get three Servos and a free spell after are both solid rates. Curve out with an Exhibition into any 3-drop into Expertise plus Trinketeer for close to 20 power on the battlefield as early as turn 4! 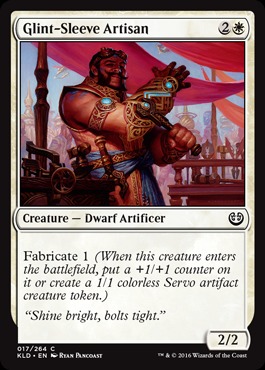 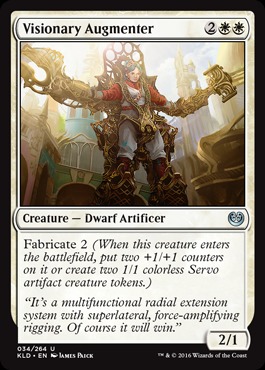 Glint-Sleeve Artisan and Visionary Augmenter can come into play as reasonably sized creatures for their cost, and you’ll certainly use that mode every now and then, but they’re mostly giving you even more ways to expand your forces. You’re getting 3 power for 3 mana and 4 power for 4 mana, and you get to spread that across multiple creatures. When some of those creatures are enhanced by the Trinketeer, you’re getting an excellent rate.

With so much token production, you’ll want more ways to pump your team, and that’s exactly what Angel of Invention does. Not only is the Angel an army in a can, capable of producing 3 creatures and 7 power single-handedly, but the Angel specifically produces Servos and pumps your entire team. This is a great team-up with the Master Trinketeer, and also can be a large, flying, lifelinking creature when that’s what the doctor orders.

Thraben Inspector and Selfless Spirit don’t let you go wide, but there’s a reason they’re in so many white aggressive decks. The Inspector value is nice, as adding a body to the battlefield that replaces itself for such a cheap cost is always welcome. Selfless Spirit protects your lords from removal and your board from sweepers, which is one of the easiest ways to lose with a strategy like this.

Declaration in Stone is a great, efficient removal spell. Exiling is important in Standard right now, and the upside of potentially taking out multiple creatures with a single removal spell is awesome.

At the end of the day, the biggest payoff for going wide might be a land. Westvale Abbey allows you to cash in a handful of your many tokens for a massive threat that many decks have no answer to. Ormendahl can close out the game in a hurry, and you can get to 5 creatures with ease. 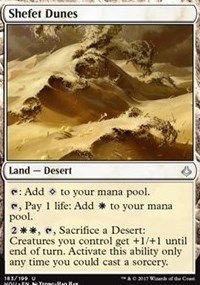 While this deck locked in a Top 8 in an Invitational Qualifier, there are some things I would change. The biggest and most obvious to me is to increase the number of Shefet Dunes. This land is phenomenal in a deck full of tokens, and it’s nearly a free roll to play them. I wouldn’t consider playing with fewer than 4. There are plenty of other cards worth considering, such as Oketra’s Monument, and I would be hard-pressed not to play a card that fits this deck’s goals so well. You can probably trim some of the slower Servo makers and Declarations as Monument doesn’t combo with Trinketeer, but it’s still awesome with Angel, Shefet Dunes, and Westvale Abbey!

Token strategies have shown they have what it takes as Oketra’s Monument found its way into the Top 8 of Denver and this Trinket list made Top 8 of an IQ.