Deck of the day – Modern UR Prowess

We are launching a new column here on Channelfireball – Deck of the Day.

All the CFB Pros will be showing you interesting decks that caught our eye while playing on the Arena ladder, in tournaments or while browsing decklists from MTGO leagues.

Today, I picked this UR Prowess deck, that’s using a new card from M21 – Stormwing Entity. 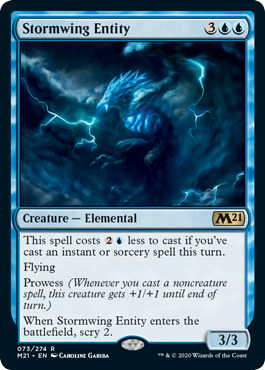 The idea is to cast Stormwing Entity on turn 2, using some of the free spells like Manamorphose, Gut Shot and Mutagenic Growth to make it cost just 2 mana, which is a pretty cheap price to pay for a 3/3 flyer with prowess, that also lets you scry 2 when it comes into play.

The deck plays out like a normal Mono-Red Prowess deck, which means starting aggressive with Swiftspear and Soul-Scar Mage and then following it up with a flurry of spells to take advantage of the prowess ability. Sprite Dragon is another interesting new addition from Ikoria that gives the deck another haste threat with evasion.

Light Up the Stage helps make sure you don’t run out of gas and is one of the best cards in your deck, but I’m not convinced about Of one Mind – there are only 8 Humans total and you really don’t want to be casting it for 3 mana. On the other hand, the red decks running Wizards Lightning also usually only run 8 Wizards, so it should probably work out fine.

Give it a try and let us know what you think!

Tags: Deck of the Day, Martin Juza, Modern, UR Prowess