There’s just something about land destruction that I love—even without Beta Stone Rains. Shutting off your opponent’s mana sources is commonplace in Eternal formats, but now you can have the same fun in Modern.

Blood Moon is still the centerpiece of this deck, as it is with many decks in Modern. No access to green ramp spells for a turn-2 Blood Moon is a huge knock against this deck compared to other land destruction strategies, but there are Simian Spirit Guides to help. With the perfect draw, a couple Spirit Guides can even lead to a turn-1 Moon, potentially while still playing a Plains!

With 5 Plains and 4 Flagstones of Trokair, I can’t possibly endorse playing Molten Rain over Stone Rain, Beta or otherwise. Yes, the 2 damage is a nice bonus, not enough to outweigh the times that you can’t actually cast your spell! Either will get a key land out of there, especially a basic under a Moon.

One of the big combos of the deck is Goblin Dark-Dwellers with Boom // Bust. Boom is a great combo for targeting your own fetchlands or Flagstones so that you aren’t losing any value while still getting to destroy their land. Bust isn’t always a realistic spell to cast, as it does cost quite a bit, but Goblin Dark-Dwellers will make that even easier. You can target a Boom // Bust in the graveyard and choose Bust. You’ll also be left with a 4/4 menace creature when all is said and done for a quick close. Removal spells and land destruction spells offer a reasonable secondary plan for your Goblin. 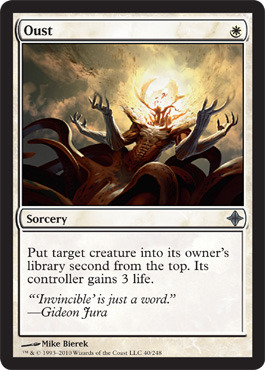 Lightning Bolt and Oust are the removal spells of choice. Bolt is a pretty easy one, but Oust is not a card you see much. This is even less likely in a white deck, as Path to Exile is one of the best removal spells ever printed. It does, however, go against the game plan. Oust may bury a creature deep enough that your LD will lock them out of even recasting the creature by the time they draw it again!

So none of these feel like great sells for playing white over green, so what gives? Is it the Kor Firewalkers? They’re going to be absolutely amazing against some of the aggro decks in the format. You’ll gain a handful of life from your own spells, but being Bolt-proof and able to stop Goblin Guides cold is awesome. Is it Ajani Vengeant? An awesome planeswalker that can lock down a land, gain some life, and eventually blow up all the lands? Possibly, but probably still not enough.

The Nahiri, the Harbinger and Emrakul, the Aeons Torn combo is awesome. It is verging on becoming an entire pillar of the Modern format as more and more decks look to incorporate it. Nahiri is already awesome at discarding excess lands and Blood Moons. It can even discard a Boom // Bust to help set up an earlier Dark-Dwellers. In a couple turns, Nahiri fetches Emrakul and you win. If not, you can even use it as a removal spell to deal with problematic permanents on the other side. Nahiri is sick!

I may have a bit of bias toward all things land destruction, but this deck is pretty sweet. Any decks that can combine Blood Moon with Stone Rains is exactly what I love to be doing—check it out if you’re in the same boat!