Mardu Vehicles has seen a huge resurgence, suddenly putting up tons of great results in large Standard tournaments. That raises the question of whether the Vehicles are actually needed—can we go in another direction? Ken Yukuhiro took an innovative approach to Mardu Aggro and came within onoe win of making Top 8 at the Japanese Nationals. His twist? There are no Vehicles or cards that care about artifacts!

Always Watching is the focal point. There are plenty of creatures in here with powerful exert abilities, and Always Watching plays well with all of them. You’re also playing an aggressive strategy that has lots of early creatures to flood the battlefield, so pumping your team gives you a real edge. It doesn’t synergize with cards like Gideon, Ally of Zendikar, so those are relegated to the sideboard in this Mardu deck.

You’ve got the best in the business as far as exert creatures are concerned in both the early game and late game. Glory-Bound Initiate can attack as a 4/4 lifelink creature on turn 3, and an Always Watching makes this thing almost impossible to race. A 5/5 vigilance, lifelink on turn 3 is an absolute beating and will end the game in a hurry against an opponent without a removal spell.

For the late game, you’ve got Glorybringer. With no help, a 4/4 flying, haste creature for 5 that mows down the opponent’s team is one of the best cards in the format. With an Always Watching in play, you get to exert and kill something every turn. Oh, and you have this 5/5 flying creature that now has vigilance to block with, too. Good luck, opponent! 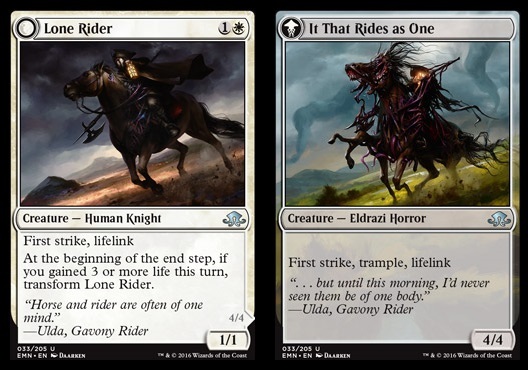 Lone Rider. Let that sink in for a second. Lone Rider is anemic on its front side, but the flip side is a beating. It That Rides as One is a 4/4 trample, first strike, lifelinking tank. So now you have to figure out how to get to the other side. Always Watching can pump your Lone Rider enough to help get you there, potentially, but Glory-Bound Initiate is the real prize. A turn-2 Initiate into turn-3 Lone Rider gives you access to a quick flip and even quicker clock.

If that weren’t enough, how about Claim // Fame? This combo with Lone Rider is amazing! They already need to deal with this thing once, but now you can cast Claim and Fame in the same turn, bring Lone Rider back, pump it up, give it haste, and flip it. There are tons of other creatures to target with Claim, such as Glory-Bound Initiate, so it’s already going to be doing serious work here. The mondo combo is icing on the cake.

Glint-Sleeve Siphoner and Thraben Inspector give you additional, early creatures that can turn into card advantage. These allow you to cash in your Claim // Fame for an extra card when you can’t do something crazy, as well as giving you an early clock to make sure Always Watchings are always doing work.

Kari Zev, Skyship Raider gives you another early threat that can end up being massive amounts of unexpected damage with Claim // Fame in the middle stages of the game. While your Ragavan token doesn’t get pumped up with Always Watching, a 2/4 first strike, menace creature is tough to block and tough to attack through once it has vigilance.

Harnessed Lightning gives you removal that plays well with your energy subtheme and Siphoner. Declaration in Stone gives you unconditional removal to deal with tougher-to-kill creatures, as well as anything indestructible.

Yukuhiro may not have been able to take down Nationals, but he put up a great result with an awesome deck that really went outside the usual Mardu box!