Legacy is the format where you have to see it to believe it. That was definitely how I felt the first time I heard about this combo deck.

Food Chain is not a new card to the combo deck scene. It was actually a popular weapon in the old Extended format around 2004 in Goblin decks. Using Food Chain and Goblin Recruiter, Goblin pilots could set the top of the deck with tons of Goblin Recruiters, Goblin Warchiefs, and Goblin Piledrivers to combo off and win the game.

Food Chain is an interesting combo piece because it requires creatures in play to actually do anything. You’re effectively investing 3 mana into casting this enchantment and then need to spend a card (the creature) to profit a mere 1 mana. This isn’t very exciting, even if it can ramp you the following turn as you sacrifice the creature the turn after you cast it. An infinite mana combo, however, changes everything. 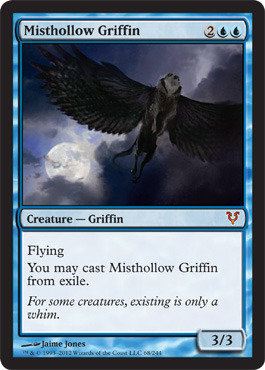 Misthollow Griffin can be cast from exile. When sacrificing the Griffin to the Food Chain, you will net 1 mana every time you recast it from exile. You can only use this mana to cast more creature spells, so this isn’t the best infinite mana combo, but it’s an effective one.

What better big creature spell to cast with all that Food Chain mana than Emrakul, the Aeons Torn? You are even casting this with mana, so despite it effectively being cheated into play, you can still get the Emrakul trigger to take an additional turn. Being able to annihilate your opponent’s board and still have a giant spaghetti monster in play is a strong winning position (and you can even keep the Griffin in play with your infinite mana to attack with!). 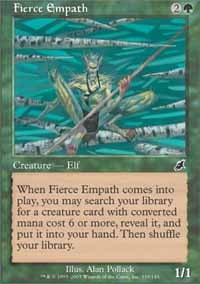 To add consistency, you have Fierce Empath as more copies of Emrakul, but that can also Gurmag Angler. Angler’s casting cost is much higher than how much it actually cost to cast, so you can accelerate a ton of mana with Food Chain potentially, and you also have a threat for the early game if you can’t combo off.

You’re playing a blue deck, so Brainstorm and Force of Will are both no-brainers. They’re the most powerful cards in Legacy—you can cast them, so you need a good reason not to play them. Force of Will can also conveniently exile a Griffin! 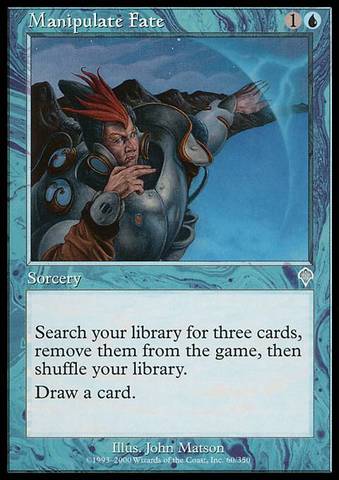 Manipulate Fate is a card you don’t see much of. It’s a bad Magic card. It also happens to remove some Griffins from the game as a serious threat. This can give you recurring flying creatures to attack and block with when you haven’t found an Emrakul or way to find her yet.

This is definitely one of the more bizarre combo decks in all of Magic, but it has put up some great results around the world and online! It’s definitely worth giving this deck a try if you like some wacky mana combos!

NEVILSHUTE, 5-0 in an MTGO Legacy League