The Death’s Shadow deck has gone through some interesting transformations. What was once a very aggressive Zoo deck featuring creatures like Steppe Lynx and spells like Become Immense eventually evolved into a more controlling Grixis deck with powerful removal, Snapcaster Mages, and giant delve creatures. Along the way, one of the most successful versions was a Jund Delirium shell, and with one variant taking down a massive Modern Challenge on MTGO this weekend, that may be the direction to take the deck going forward.

Death’s Shadow is a silly creature. Not only is it crazy powerful as a potential 12/12 for just 1 mana, it’s confusing and promotes unsual game play. While I don’t support a ban of Shadow in Modern for reasons of power level, it’s these other problems that make a compelling case. Not knowing whether you should attack on an empty board is just a weird way to watch and play the game, and the fact that you can attack with a pair of 2/2 creatures into a 2/2 Death’s Shadow and not have it die after blocking in combat is not intuitive and not great for Magic. That said, this card is amazing. You take some extra damage along the way, which may feel risky, but the opponent doesn’t have much time to capitalize. If they happen to be playing an aggressive deck, they’ll be doing a lot of your work for you.

The Jund shell grants you access to some of the best green creatures in Modern. First and foremost is Tarmogoyf as it’s one of the most influential printings in the history of Magic. You feature so many cheap card types that you can get into the graveyard (short of enchantment), so your Tarmogoyfs are stronger here than they’ve been in any other shell. You also get to play multiple copies of Grim Flayer as a 2-mana creature that will almost always be a 4/4 trampler that offers you some card selection.

The biggest beenfit from the Delirium Jund shell is Traverse the Ulvenwald. Sometimes Traverse will just get you a basic, which can be very useful for a deck that’s only playing 18 lands. Most of the time, however, it’s looking to get a 1-mana 10/10 Shadow or a 2-mana 6/7 Tarmogoyf. These cheap creatures that are way more powerful than their casting cost make this deck so explosive.

To go with these fantastic creatures, you have a plethora of interaction. Full playsets of both Thoughtseize and Inquisition of Kozilek make sure that the opponent can’t interact with your creatures or with you. You can take their threats or their answers, make sure they can’t combo off, and be the most punishing deck in the format against mulligans.

Multiple copies of Liliana of the Veil gives you planeswalker as another card type. Killing a creature before going to work on the opponent’s hand is the normal play pattern, and you have plenty of removal and large creatures to protect your Lilis.

Mishra’s Bauble allows you to play a slightly lower land count, but it does much more. You’re playing a deck with 8 copies of 1-mana discard spells, so this gives you access to perfect information early to sculpt your plan. You’re also playing a bunch of fetchlands, so you can know what’s on top of your deck before deciding to fetch or draw with Bauble. It’s a 0-mana way to get artifacts into the graveyard for delirium and ‘Goyf, so Bauble is an MVP here.

Street Wraith provides multiple functions. Losing life can be a huge benefit with Shadows, and this will allow you to cast them earlier or use Wraiths as a combat trick. You also get to see more cards and get a creature into your graveyard for free. 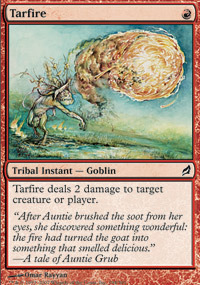 Your removal suite starts with Fatal Push to give you tempo, moves to Terminate as a catchall, and features some Kolaghan’s Commands for card advantage. You also have multiple copies of Tarfire to give you the tribal card type in your graveyard.

While you don’t play any copies of Become Immense without Probe, and you don’t play any delve creatures, you still feature the “combo-esque” finish of Temur Battle Rage. You’re playing 3 copies to combo with your Shadows, ‘Goyfs, and Flayers to offer an early kill after you strip the opponent of their interaction with your discard.

Death’s Shadow variants are among the most powerful decks in Modern, and this feels like the direction the deck is going to move back to. Keep in mind that while the main deck is strictly Jund, it’s easy enough to play a single Godless Shrine that your 10 black fetches can find to turn on all the powerful white sideboard cards featured here!