The Jeskai God-Pharaoh’s Gift deck is one of the hottest decks to come out of Hour of Devastation, and with good reason. It puts together some incredible pieces to give you an insurmountable advantage early in the game. The original versions that spread across the internet were straight U/W, and the versions that focused more on U/R began to emerge before Grand Prix Denver. Now there are full Jeskai lists.

The God-Pharaoh’s Gift deck relies, shockingly, on God-Pharaoh’s Gift. This is an absurd card once it’s on the battlefield, but that isn’t the easiest thing to accomplish for a spell that costs 7 mana. The easiest way to get it into play is by using Gate to the Afterlife—a 3 mana artifact that can actually do some real work in the deck on its own. By gaining a life and letting you loot whenever a creature you control dies, you’re making sure you survive long enough to get a Gift into play while also loading the graveyard to activate Gate. Once you’re up to 6 creatures, you can cash the Gate in for the Gift—and now you also happen to already have that stocked graveyard to start eternalizing for value. 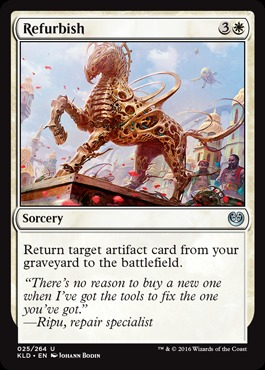 Another way to get the Gift onto the battlefield is by casting Refurbish, and the full 3-color version focuses on this game plan with a full playset. With plenty of ways to loot, discard, and mill yourself, getting a Gift into the graveyard is easy. This does mean you have to up your Gift count beyond the typical 2 to make sure you hit one off a mill or have one to discard, but that’s a small price to pay for more consistent turn-4 Gifts. It’s a little surprising to see zero copies of Cataclysmic Gearhulk or any other good targets to bring back with Refurbish beyond Gate and Gift, but you are focused on plan A.

The U/W version of Gift had powerful 1-drop options in Minister of Inquiries and Thraben Inspector. Minister is the more important of the two, especially in a version with Refurbish, as being able to mill yourself is an essential part of the game plan. The U/R version was successful because Insolent Neonate is a stronger 1-drop in the deck than Inspector. Neonate digs, gives you a discard, and it’s a creature itself for the graveyard. This is a potent combination with Gate to the Afterlife. Well, the full Jeskai version decides to utilize the full playset of all three different 1-drops for maximum creatures and utility.

Angel of Invention is your powerhouse to return with Gift, and is so good that the straight U/R versions that can’t even cast it play all 4. A 6/6 flying, vigilance, lifelink, haste creature that pumps your team is too much for most decks to handle, and being able to hard cast Angel is also very strong in many matchups.

Champion of Wits is ridiculous. Another creature for your creature count that also lets you cast Faithless Looting is exactly what you want. It’s a great way to deal with mana flood and sets you up both ways by discarding Gift and finding Refurbish. Walking Ballista is excellent versus creature decks, gives you another mana sink, and is a great way to turn on Gate (even when you just cast it for 0, send a creature to the graveyard, gain a life, and potentially loot another creature to the ‘yard).

A sweet addition to the Jeskai deck here is Saheeli Rai. You have lots of creatures with good enters-the-battlefield abilities—even a Minister to get extra energy and some additional mills. Or copy a Gate to find an extra Gift, or the Gift itself!

The Gift deck is awesome and legit, and many of its pieces will stick around after the rotation, so be prepared for Gifted-up creatures for some time to come!

MYOUJYOU0525, 5-0 in an MTGO Competitive League