The growing trend in Jeskai strategies has been to become more controlling with fewer win conditions. This version has seen quite a bit of success and is an excellent version of the deck, yet Mantis Rider is an extremely powerful card, and we don’t necessarily have to even splash black.

Splashing the fourth color in Jeskai is relatively easy. You already want a decent number of basics for battlelands and a mana base filled with fetchlands. Polluted Delta can retrieve every color except for green in Standard and Bloodstained Mire can fix your blue and red while also giving you easy access to black. By adjusting which fetches you use, you can just as easily splash green. The options aren’t as flashy, but Den Protector is extremely powerful.

Going the more aggressive route is going to catch your opponents off-guard and is the best way to capitalize should they stumble. I’ve lost to versions of this deck while playing Jeskai Black Mentor since even a slight misstep can be punishing. Gideon, Ally of Zendikar and Wingmate Roc are incredibly tough to beat even with solid draws. The card advantage and power they provide is completely unbeatable if you fall behind.

Mantis Rider is still an excellent card that provides a quick clock. As Jeskai decks start to shift away from Mantis Rider, the 3/3 flying haste beater will continue to get better. Players will load up on more answers to Soulfire Grand Master, Monastery Mentor, and Jace, Vryn’s Prodigy. If this means more cards like Wild Slash and Ultimate Price see play, then Mantis Rider’s stock will rise again. 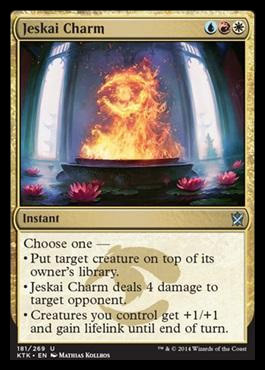 Jeskai Charm hasn’t seen as much play since rotation, but all 3 modes are quite strong. The tempo gained by either putting a creature on top or gaining a bunch of life is huge in a race, and 4 damage to finish an opponent off or kill a Gideon is reasonably priced at 3 mana.

The rest of the deck can be filled out with powerful Jeskai staples like Jace, Vryn’s Prodigy, Fiery Impulse, Treasure Cruise, and whatever removal works best for your local metagame.

By Kevin Jones, Top 4 at the Players’ Championship