With Ixalan coming shortly, the control decks that port over well to the new format make for a great place to start your deck building. Today, we’re going to look at Grixis Control—why it works, and what it’s going to lose.

The threats in Grixis Control are excellent, and they begin with Torrential Gearhulk. This was actually looked at as potentially the weakest of the Gearhulks when the cycle was first spoiled for Kaladesh, but that turned out to be far from the case. Its huge body, flash, and ability to create value has been amazing for control players. The only thing Gearhulk asks of you is to play some strong instants, and each set has given blue some exciting new options.

The Scarab God and Nicol Bolas, God-Pharaoh are the new kids on the block, but they pack a punch. The Scarab God has been taking over the format, as it’s tough to kill, not too expensive to get into play, and only needs lands and creatures in either graveyard to take over. Nicol Bolas is lights out at 7 mana. Killing creatures, tearing apart the opponent’s hand, or just stealing cards from the top of their deck are all great abilities, and the high loyalty means Nicol Bolas is extremely difficult to kill.

You’ve got lots of solid options for card drawing. Glimmer of Genius can see up to four cards, up your energy, and give you card advantage while finding the spells you need. It’s good enough that U/W Control in Modern has started to adopt Glimmer as well. Hieroglyphic Illumination gives you a “split” card effectively thanks to cycling and a way to use your odd mana early. Supreme Will is yet another split card to help you dig for the threats and answers you need, or to counter a key spell from the opponent.

Red removal has proven extremely strong in the current Standard format, and the rotation of Grasp of Darkness is only going to intensify that. Harnessed Lightning is the best in the business when you have energy available, as it’s good early for just 2 mana but still scales late to deal with the biggest threats in the format.

Magma Spray gives you early interaction and a way to deal with harder threats like The Scarab God combined with another removal spell. It’s also critical for dealing with Dread Wanderers, Scrapheap Scroungers, and Earthshaker Khenras. Abrade has lots of great targets, with tons of creatures that have 3 or less toughness, as well as Gearhulks, Vehicles, and God-Pharaoh’s Gifts to kill.

Some sweepers in Hour of Devastation and Sweltering Suns give you ways to deal with multiple threats at the same time, and Hour can even get rid of planeswalkers that you couldn’t counter.

The counter suite isn’t particularly impressive, but Disallow is a really strong card. A hard counter and a way to deal with planeswalker ultimates form a nice combination in a 3-mana card. This list only plays 2 copies of Censor, which I simply can’t endorse. The flexibility of Censor is what makes blue decks so appealing to me, so I strongly recommend moving to 4 in any control list. Essence Scatter gives you some more creature “removal” and early interaction. 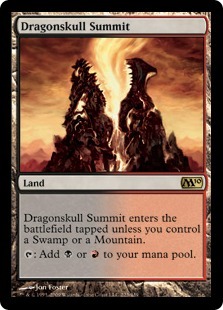 The biggest loss to any U/R based control deck after the rotation is going to be Wandering Fumarole, and there’s no direct replacement. This might mean that you want to play more win conditions in your main deck, but that’s not necessarily required. With the God and Nicol Bolas, you have lots of ways to close out a game. You also lose some of your good mana options, but Drowned Catacomb and potentially Dragonskull Summit mean that your mana might be even better going forward with more lands that can enter the battlefield untapped.

The other key losses to address are those in the sideboard. Cards like Dispel can be replaced with Spell Pierce, and Summary Dismissal isn’t really needed with the Eldrazi rotating out and your 4 Disallows. Thing in the Ice and Dragonmaster Outcast are what you really need to find replacements for, and that’s going to be key if you want to win with Grixis Control going forward!

ANGRYPHELDAGRIF, 5-0 in an MTGO Competitive League