“Goblins” may not be the most accurate name for this Pauper deck, but it does put the little red guys to great use. Without the Goblin synergies typical of these decks, it still works as a cohesive aggressive package to maximize damage and minimize the drawbacks that many of these creatures come with. 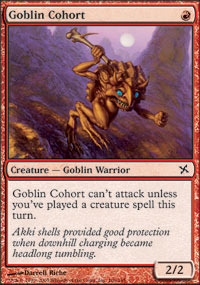 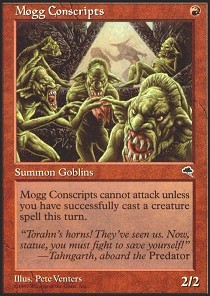 Goblin Cohort and Mogg Conscripts are functionally the same card, although you can’t take away that Warrior class from the Cohort (they’ve earned it!). A 2/2 creature for a single mana is a nice rate, especially in a powered down format of all commons, but you’re required to play a creature if you want to attack. This drawback forces you to tap mana during your first main phase and always have creatures available to cast, but neither of those are major issues in this deck. You’re only playing 17 lands and you don’t have a single noncreature spell in your deck that costs more than 1 mana! 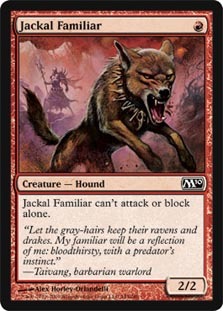 Jackal Familiar’s drawback is a bit more relevant than needing to cast a creature spell, although certainly not a big deal here either. Not only do you have plenty of other creatures to cast on turn 1, leaving this to come out once you already have creatures, but you’re loaded up with plenty of haste options! 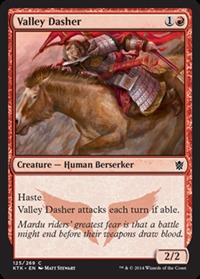 Valley Dasher is another creature in a long line of cheap beaters that have a drawback, but attacking each turn is already what this deck wants to do. You can even get a reprieve by casting it on your 2nd main for a turn, but if you’re not attacking every turn, you’re probably losing. 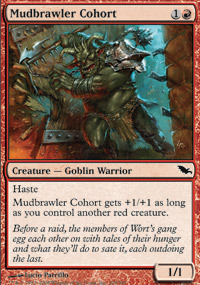 Mudbrawler Cohort is going to be a 2/2 haste creature for 2 almost every time. Not having another red creature in play probably meant that this game went downhill already, so as long as things are proceeding as planned, you have another solid haste attacker.

Burning-Tree Emissary gives this deck velocity. With all red creatures, you’re not going to be able to cast two creatures off the enters-the-battlefield trigger, but you also don’t have a single creature in the deck that requires RR. This means that all of your other 2-drops can be played following Emissaries on turn 2. 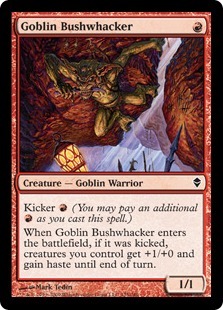 Goblin Bushwhacker allows you to combo off. You can cast it for 1 when need be, but you’re hoping to play a Bushwhacker right after flooding the board. You don’t get the same benefit as Reckless Bushwhacker with Burning-Trees in that Goblin Bushwhacker requires double-red to kick, but it’s going to be your best play on turns 3 and beyond. 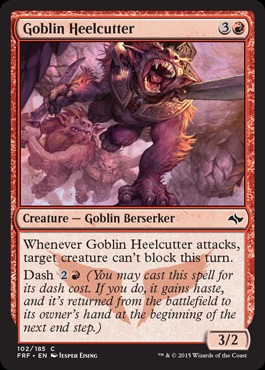 Goblin Heelcutter is another haste threat that can deal huge amounts of damage each turn. Turning off a blocking creature when your deck is all 1- and 2-mana threats is huge, as opponents will desperately be trying to block to stay alive. 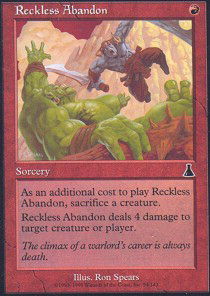 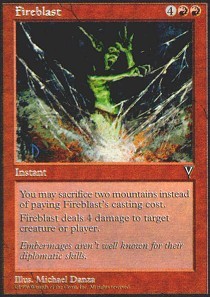 The spells in this deck are as cheap and efficient as you can find. The playset of Lightning Bolts can clear the way and give the deck reach. With so many creatures, Reckless Abandon allows you to go over the top to finish off the opponent, especially in conjunction with a Fireblast. Neither of these spells are easy to cast multiple copies of, but with 2 in your deck you should have considerable reach. Mutagenic Growth is like a free Shock that also allows your aggressive creatures to win combat. Opponents will be forced to block no matter what with how aggressive you are, but it’s even sweeter when your creatures looked like they were forced to chump attack!

Pauper is capable of some really quick games, and it’s hard to imagine many decks being able to keep up with the speed of this one!

SQUIRTLETHEAEONSTORN 5-0 in an MTGO League