As Dredge declines, graveyard hate tends to go with it. When that happens, it’s the perfect time for explosive graveyard strategies to shine. 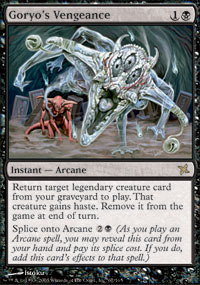 Goryo’s Vengeance is near the top of everyone’s list of cards that should be banned in Modern. You’re only investing 2 mana to win the game in a handful of situations. It does require a bit of setup, and you do need to have a legendary creature in your graveyard, but those legends are pretty amazing. The ability to invest so little mana at instant speed to take over the game is broken.

The preferred target for those Vengeances is Griselbrand . A 7/7 flying lifelink creature packs a serious punch, and the ability to draw at least 7 cards will take over the game. The fact that this can be used defensively at instant speed to block, gain 7 while eating a creature, and draw 7 is overwhelming. This is not even the A plan for this deck, however.

Every creature here is legendary, but Jace, Vryn’s Prodigy is the only one to show up in more than 2 copies. Jace comes down early to filter your hand so that you always have action. He’s also the perfect way to discard big creatures from your hand, set up delve, and eventually flip for even more value. You can even use Goryo’s Vengeance to target Jace, use his loot ability to get a card deeper, and then flip into a planeswalker. Jace will no longer be exiled at end of turn since he’s no longer in play, and you can use the planeswalker side to flashback Goryo’s—or anything else you want. 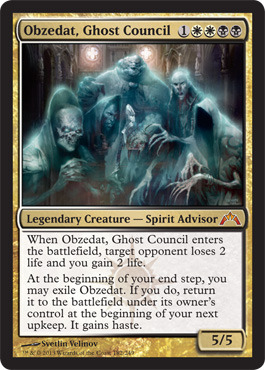 There’s a similar combo with Obzedat, Ghost Council. Obzedat is already incredibly challenging to kill in Modern as cards like Lightning Bolt, Abrupt Decay, and Fatal Push just look silly against it. Sorcery-speed removal does nothing, and Obzedat hits hard every turn while also giving you a nice life buffer. In combination with Goryo’s Vengeance, you can exile Obzedat to its own ability before it would be exiled to Goryo’s end-step clause, meaning your huge monster will come back next turn for more beats.

Serum Visions is always a great enabler in any of these blue decks. It’s no Preordain or Ponder, but there’s a reason those cards are banned. Visions does a great job of smoothing out your draw and giving you the best chance of finding the tools you need. Thought Scour doesn’t give you selection in your hand, but it does replace itself and load up your graveyard. Since many of your spells actually would rather be in your graveyard, or require you to have a stocked graveyard, this is just upside.

Pieces of the Puzzle is not a card I’ve seen played in Modern, but it’s pretty sweet here. You can dig for more card draw, removal, interaction, or Goryo’s Vengeance. Loading up your graveyard is already awesome with delve spells, flashback spells, and Goryo’s Vengeance in your deck, so this is a really strong Divination.

Thoughtseize and Inquisition of Kozilek might be the most busted cards in all of Modern. They’re a large part of what makes Death’s Shadow so good, and they really ruin people’s day. Fatal Push is probably the best removal spell in Modern, so these 1-mana black spells are all insane. 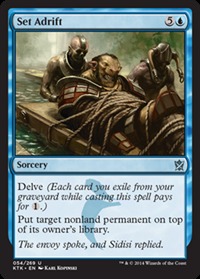 This deck has lots of delve options. Murderous Cut for removal, Set Adrift for tempo, and Tasigur, the Golden Fang for a creature that dodges Push and provides value.

Finally, with all of this self mill and perhaps a bit of setup cost, there’s Lingering Souls. The Spirit tokens can go aggro alongside Obzedat or just protect your life total while you get your engine moving.

This is a super sweet way to utilize many of the best cards Modern has to offer!