Whenever I think of U/W-based control decks in Modern, Supreme Verdict comes to mind—a key tool that allows you to play the waiting game and reset the board once your mana is developed and you’re able to handle threats individually. This Esper Control deck completely skips the sweepers and instead focuses on mana advantage for tempo and pure card advantage.

This is very much a Snapcaster Mage deck. There are 4 of them in the deck, and it’s 4 of only 6 cards that aren’t lands and can’t be flashed back with Snapcaster. A 2/1 creature isn’t the biggest threat in the world, but it does a reasonable amount of damage and you have plenty of ways to protect them. Mostly the Snapcasters are here to turn your 2-for-1s into 5-for-2s. Getting to cast a 2-for-1 is great, but Snapcaster Mage giving you a body while also granting you an additional 2-for-1 is game-breaking.

The only other non-spell in the deck is Tasigur, the Golden Fang. Tasigur is perfect for coming down as early as turn 2, but mostly to be cast in the middle stages of the game for a single mana while threatening to cast many other instants in the same turn. While Snapcaster would love to have the maximum number of cards in the graveyard and delve asks you to exile them, restocking the ‘yard with Tasigur’s activated ability will keep him happy.

Thought Scour is the true MVP in this deck. You’re running 4 Snapcaster Mages, 5 total delve cards, and even spells with flashback. Putting multiple cards into the graveyard for a single mana is already akin to a Dark Ritual when it comes to delve, and Thought Scour will replace itself, help turn on your other key cards, and can even can be flashed back with Snapcaster to increase the advantage for just a single mana.

Many games will be won by going to the skies with Lingering Souls. Creating 4 power and 4 toughness across 4 creatures that all have flying is worth quite a bit of mana, and Souls only asks you to pay 5 that you can spread out over multiple turns. The added advantage of being able to flip a Lingering Souls into your graveyard and still get value from the flashback after a Thought Scour or Tasigur activation is huge.

Another way to get a Lingering Souls into your graveyard for value, or any other card for that matter, is with Collective Brutality—a split card that can help clear the way by taking an opponent’s removal spell, kill their creature, and even give you a bit of reach or life gain against Burn. On top of that, it’s a discard outlet that lets you gain value by stocking your graveyard with Snapcaster hits, flashback spells, and delve enablers.

Opt does great things for strategies like this. It’s a cheap spell to get into the graveyard, allows you a cheap way to turn Snapcaster Mage into an early card draw spell, and it helps filter and improve your draw. Serum Visions asks you to tap mana on your turn for the sorcery, and in a deck with this many instants and Snapcaster, Opt is a nice upgrade.

The removal suite for Esper is as powerful as it is cheap. Fatal Push and Path to Exile remove just about everything in the format and only ask you to pay a single mana to do so.

Cryptic Command is your big haymaker. and you’re going with the full playset. Everything in the deck is pretty cheap to cast, so this is the top of your curve and generally acts as your game-winner. It sets up the late game, is a hard counter, taps down an opposing team from either hitting you or blocking, and it can even draw a card. When the game goes late, you can start doing Snapcaster tricks by bouncing Snapcaster to your hand, replaying Snapcaster on Cryptic Command, and getting to go all over again. 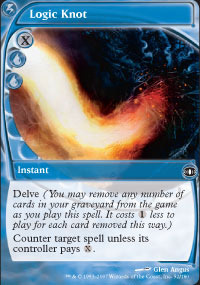 Spell Snare gives the deck some early interaction, and Logic Knot can feed off the graveyard by giving you an effective hard counter through most stages of the game. Logic Knot’s delve can also improve Tasigur’s activated ability by removing the cards you may not want returned to your hand. 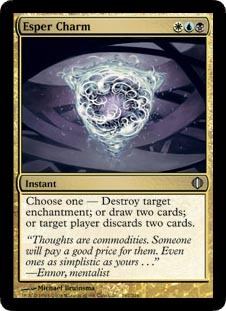 Esper Charm gives you one final piece of potential card advantage or disruption. Taking your opponent’s last two cards, drawing two, or killing a critical enchantment are all worthwhile modes depending on the battlefield at hand.

Esper Control gets to play many of Modern’s most powerful cards and makes incredible use out of all that is Snapcaster Mage. With so many options available each turn at instant speed, this is one of the harder decks to play against and defeat!