The Eldrazi have taken over Modern, dominating GPs across the globe while also demonstrating their power in Standard. The blue Eldrazi cards like Eldrazi Skyspawner, Drowner of Hope, and Ruination Guide can fight alongside Dimensional Infiltrator for a nice aggressive shell.

When it comes to a shell of powerhouse all-colorless creatures, the options to surround them with apparently have no limit. Thought-Knot Seer isn’t as powerful in Standard as it is in Modern, and that isn’t just limited to the fact that you don’t have Sol lands to accelerate the Seer out on turn 2. There is more removal in a typical Standard deck than a Modern deck, with lots of large creatures around, and so it isn’t necessarily a 4-of in the Eldrazi deck. Reality Smasher is a great value even without the tempo boost. 5 power and haste with trample is already strong, and the added bonus on targeting the Smasher makes it an excellent Standard player. 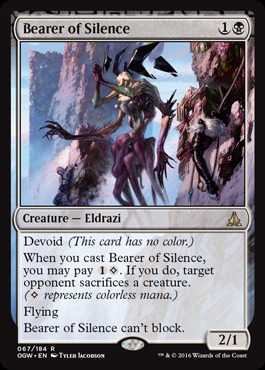 Playing black instead of blue gives you access to Bearer of Silence. This card is good enough that people have been finding ways to stretch their mana to splash this guy in the UR versions. A 2/1 flying creature is a good deal for 2 mana in a deck with Ghostfire Blades, and it has utility beyond turn 2.

Black also allows you to play upgraded removal spells, such as Ruinous Path, that can deal with troublesome planeswalkers.

The other black highlight has been doing work in Rally decks around the world. Catacomb Sifter puts 3 power on the board for only 3 mana, essentially an Eldrazi Skyspawner—the extra toughness helps in some matchups. The acceleration of the Scion is often useful, but having access to scry when so many games come down to the wire is key.

Note the inclusion of both Sylvan Advocate and Nissa, Vastwood Seer in the deck. Both are strong cards and should be considered in any green deck, but they don’t have a lot of synergy with the rest of the list. This helps to show just how powerful these cards actually are. Even without Ghostfire Blade synergies, pumping up Hissing Quagmires and having an early play is good enough.

The Eldrazi shell is so powerful that you can go in any number of directions. I don’t think Eldrazi will ever come close to taking over in Standard like they have in Modern (and honestly, what ever could?), but this deck is powerful and quick.