Ixalan is legal on Magic Online, but the crazy new decks are still on hold, apparently. Everybody is busy getting their Draft on and diving into the new Limited format, but some brave souls have decided to try their hands at discovering what a few new additions can add to previously established Constructed decks.

Approach of the Second Sun is a great card to build around for a control strategy as the life buffer goes a long way to making sure that you stay alive to cast a 7-mana spell twice. Access to more copies protects you from discard and countermagic, but more importantly it allows you to cast Approaches on consecutive turns to win the game quickly. Without a single creature or planeswalker in the list, you can fill your deck with interaction while your opponents are left holding dead cards. Harnessed Lightning, Abrade, and Fatal Push all look awfully silly against this deck.

Glimmer of Genius is your best card draw spell, even though you have no use for energy anywhere in the 75. Seeing up to four cards allows you to find lands, Approach, or a sweeper. Hieroglyphic Illumination has traditionally paired with Glimmer in these decks for its ability to be cycled early and cash in for card advantage late. It looks like you no longer need that one!

Opt is sort of like a 1-mana cycling spell with upside. Scrying before you draw a card gives you more looks at finding what you need. Opt is also a great way to get deeper into your library when you know there’s an Approach 7 cards down. As an instant, it lets you keep up the many instants in the deck at all times, which is very important for this style of deck. 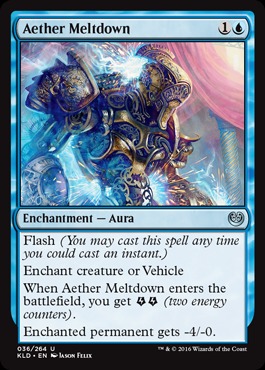 Blessed Alliance and Immolating Glare both rotated out of the format, so finding early interaction is key. There was serious negative interaction between Alliance and Aether Meltdown, but that’s no longer a concern. Aether Meltdown can proactively shut down creatures so that you can use your mana effectively, and the creature stays on the battlefield for extra life from Fumigate! 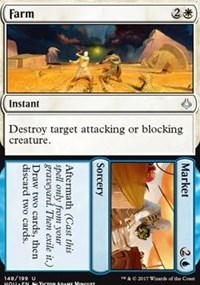 Less removal means that a card like Farm // Market goes way up in value. Killing an attacking creature is very strong, and the ability to filter cards with the aftermath is a nice bonus on an otherwise solid card.

Cast Out is such a versatile removal spell—it can deal with Hazoret, planeswalkers, and any creature at instant speed. 4 mana is definitely a high cost, and it’s a card that I cycle often, but that’s just more reason to have more copies later.

Don’t leave home without 4 Censors. Just don’t do it. It offers powerful interaction early and it cycles. You also have an Essence Scatter to stop some early creatures, which should help offset the loss of some of your early removal. Supreme Will is your final option for countermagic, although you certainly don’t mind looking at the top 4 and it’s a great way to find an Approach after you’ve cast the first copy.

Fumigate is your top sweeper and the life gain is very important. You’re looking to survive early, and this is your big push to making sure that you get to 7 mana for Approach. A new option is Settle the Wreckage. You don’t mind giving your opponent tons of lands—you love wiping their board! Some players played main deck Descend upon the Sinful as an exile effect to deal with tough creatures like Scrapheap Scrounger or anything indestructible. This does an amazing job of that, and it can take down Bristling Hydras and similar hexproof creatures against unsuspecting opponents.

One final Ixalan addition to the deck that may end up growing in numbers as time goes on is Search for Azcanta. This comes down early and lets you effectively scry by sending cards to the graveyard. This means that you find what you’re looking for more quickly, and once your graveyard gets to seven cards, it flips into an incredible land, capable of finding every single spell in your deck. With no nonland misses, this ability to draw extra cards is going to be really tough to beat. Plus, it can accelerate you to 7 mana!

The rotation took a bit away from Approach, but it may have added much more. If you’re not prepared to win before the Sun comes a Second time, you’d best be ready to lose!

Approach of the Second Sun

URANO, 5-0 in an MTGO Competitive Queue