Last time, I introduced life gain as an archetype to my Cube, and covered the archetype’s design in white, which predominantly revolved around producing massive threats by combining life gain triggers with Ajani’s Pridemate and Archangel of Thune. Today we go deep into the tank, layering lifegain with Cube’s other archetypes, branching into all five colors and testing something wholly unprecedented in the Utility Land Draft.

Life as a Resource

In a typical draft, a maximum of one player will be interested in beating down with oversized Pridemates. One of life gain’s classic design problems is that it doesn’t achieve much unless we convert life into a useful resource. Namely time, board presence, or cards.

We expand the theme with the following.

Phyrexian Reclamation was originally added as a very Orzhovian win-condition: stalling the game and winning through attrition. I imagined it would find a home exclusively in heavy life gain decks, but testing remedied that line of thinking: everybody wants this card. Want to rebuy your control finisher? Put a Zombie back in your hand to restart Gravecrawler chains after a board wipe? Evoke Mulldrifter over and over? After seeing it in action, I’m amazed Phyrexian Reclamation hasn’t become more of a Cube mainstay, life gain theme or not.

There are some other cute synergies. Reclamation is yet another card with Entomb interactions. To further push the card, I added a second copy of Shriekmaw in place of Doom Blade. Shriekmaw’s interactions really tie all of my Cube’s themes together.

• After evoking, it can be sacrificed to the likes of Carrion Feeder, Goblin Bombardment, Blasting Station, and Falkenrath Aristocrat.
• It triggers life gain when Soul Warden and Suture Priest are on the battlefield.
• Can be targeted by Undying Evil after evoking.
• Causes two life gain triggers with Blood Artist on the table
• Birthing Poddable

I’m more than happy to double up on any card that provides that much synergy.

Two more options for converting life to cards. Erebos provides some latent hate against life gain decks, and also serves as a realistic curve topper for black aggro decks that fill the board with Bloodghasts and Geralf’s Messengers.

Blood Artist is perhaps the biggest Cube sleeper card I’ve ever encountered. We Cubers weren’t the only ones who missed its potential. From LSV’s Avacyn Restored set review:

There will be blood… in Limited. In Constructed, this just isn’t Disciple of the Vault, for which I am thankful.”

How imposing could a two-mana 0/1 be? Let’s just say it could rock Carnivorous Death-Parrot‘s flavor text unironically. Blood Artist is often the biggest threat on the table, and it’s in demand by Zombie, life gain, and Birthing Pod drafters alike. In my last draft, Blood Artist combined with Ajani’s Pridemate to make a 16/16 Cat Soldier. Any removal spell becomes a combat trick with Blood Artist and Pridemate on the table.

Okay, this one’s only technically black. Vault Skirge is a great opener for Pridemate draws, but non-life gain decks aren’t generally in the market. To create competing demand, I’ve reintroduced the artifact subtheme.

Tezzeret and Vault Skirge combine to make a Build-a-Baneslayer Workshop. For added support, I’ve tossed the artifact lands back into the Utility Land Draft.

Obzedat has been surprisingly castable, and provides a nice bomb for the archetype. Gerrard’s Verdict has carried its weight, but I wouldn’t fault somebody for trying Tithe Drinker in its place.

After years of Cubers bemoaning the lack of viable and interesting black aggressive options, last year’s Zombie update left my Cube with a rather unique problem: black-based aggro was both the most fun and most powerful strategy in my Cube. I don’t want to nerf the archetype’s entertaining mix of interactions, but I would like to increase the number of ways to interact with the deck. Cards like Anger of the Gods are a great first step, and doubling down on Deathrite Shaman and Scavenging Ooze allows me to kill two birds with one stone: provide Zombie hate and ample life gain triggers for Pridemate decks.

Kitchen Finks is the perfect follow-up to Ajani’s Pridemate, but more importantly bolsters the Birthing Pod strategies, which had been a touch underpowered. The strength of Pod decks was highly correlated with access to everyone’s favorite Ouphe.

These overlaps allow unique hybrid decks to be put together. Zombie-Pod and Tezzeret-Pod have proven viable options, and recently a drafter assembled the above Life-Pod deck. With Pridemate on the table, the deck can chain Kitchen Finks into Obstinate Baloth for a flurry of life gain triggers. Birthing Pod provided an innovative way to get reliable lifegain triggers in a deck with otherwise low lifegain saturation.

Courser doesn’t provide the curve-out lifegain trigger that Kitchen Finks does, but combines well with fetchlands when mixed with Ajani’s Pridemate and Archangel of Thune.

In an earlier iteration of my Cube, it was possible to draft an incredibly tricky and potentially broken green/white landfall deck centered around the following core of cards:

There’s a huge web of interactions between these cards, and while Strip Mine locks aren’t the most interesting game states, setting up chains with Zuran Orb, Fastbond, and Life from the Loam (or Crucible of Worlds) was rather satisfying. Despite the potential brokenness, the deck was difficult to draft and pilot correctly, and the game plan was more involved than simply turning guys sideways.

Ajani’s Pridemate slots into this shell, and provides further redundancy for getting value off of Zuran Orb/Loam chains. I no longer run Strip Mine, Armageddon, or Balance, but the Zuran Orb/Flagstones of Trokair engine is still intact for pumping both Steppe Lynx and Pridemate.

I don’t plan on bringing the broken cards back in, but if that’s the way your Cube skews, this is definitely a set of interactions to consider supporting.

Life gain really isn’t in red’s portion of the color pie, so the entirety of our support lies in the gold section. That said, there’s still fun for red to have.

Sulfuric Vortex has been out of my Cube for about a year, mostly because it wasn’t needed. It turns out when you run aggro-friendly fixing, your aggro problem practically solves itself.

Yes, Punishing Fire. To support it, I’ve tossed Grove of the Burnwillows into the Utility Land Draft pile, and the combination has been an immediate hit with the drafters. Going further down that rabbit hole…

In addition to providing hate for life gain effects on the other side of the table, it’s possible to grow the Predator yourself. All of these combine to form a nice Naya control shell.

Like red, blue’s slice of the pie is devoid of life gain effects. Horizon Chimera triggers once per card, which works well with my Cube’s trio of Brainstorms. I used to run Preordain/Ponder/Brainstorm, but Brainstorm has infinitely more play to it than the other cards. Consider this recent 3-0 Simic control deck:

Brainstorm does everything in this deck, from flipping Delver, stetting up Augur and Shardless Agent, prepping a Bonfire miracle, and shuffling away cards with the fetchlands. Add “triggering Horizon Chimera three times” to the list of interactions.

Sejiri Merfolk is basically an easier to cast Knight of Meadowgrain in a Cube with a fetchland-shockland mana base, and provides a much needed link between blue and the life gain archetype.

This dedicated life gain deck was capable of growing double-digit sized Ajani’s Pridemates, but one problem it face was actually forcing through damage. Pridemade has no natural evasion, and can be chump-blocked for days. Rancor helps, but is undoubtedly already in your Cubes. For more options, consider the following.

In a pinch, Wolf Run can be activated for 0.

I originally planned to run Kabira Crossroads in my Utility Land Draft pile, but entering the battlefield tapped is a pretty significant drawback. As we don’t really care about that amount of life gained, and only the trigger, I slotted in Refuges instead.

For an untapped option:

Seraph Sanctuary triggers off of Mirror Entity, pumps Pridemates mid-combat with Restoration Angel, and pairs a bit too obviously with Archangel of Thune.

Lastly, we turn to a design decision I tried out merely as an intellectual curiosity.

Technically they gain life, but they don’t really hook into the above themes in any significant way. I tossed the idea to the Cube community and nobody really knew what to think of it. I didn’t either. So I tested it.

The rule for drafting them is that you spend two Utility Land picks to draft the entire bundle of six lands. Still, we didn’t know what to make of it. Two picks is actually a high opportunity cost, and often it means passing up on including something like Volrath’s Stronghold or Treetop Village. None of the players were taking the bait, and draft after draft the Posts returned to the land box. Unplayed.

Finally I bit the bullet and swooped them up. Here’s what I built:

A little rough, but the deck was competitive. More importantly, it was a total blast! Post decks play unlike anything Cube has ever presented. With so many colorless lands in your deck, you can’t afford to take very color-intensive spells, and have to be conservative with your splashes. Land sequencing presents unique challenges.

My deck above was fundamentally misbuilt. What I later realized is that Cloudpost allows you to ramp without mana dorks, and, more critically, to run board wipes. Previously ramp decks couldn’t really profitably run mass removal, unless you ran a high density of artifact-based ramp, which presented its own set of problems.

Including Cloudpost in the Utility Land Draft opened up a brand new set of (really fun) archetypes with minimal design effort. I already had the following Post-friendly cards in my Cube: 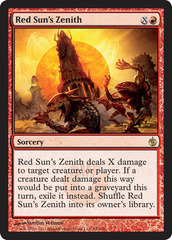 I tossed the deck a bone with a single, narrow Post-only card.

If you already run the Utility Land Draft, give the multi-Post experiment a shot. The whole package can be acquired for about the cost of a Subway footlong. It’s proven to be a versatile shell, and drafters have been assembling Post decks of various color combinations with mixed success.

As a final note, it’s possible that the six-card Post package will be too powerful in your environment, in which case I recommend shaving a Glimmerpost from the package.