GP Denver has come and gone and brought a shake-up in Standard, which is always nice to see as a brewer. It shows that the format is still evolving and there are still weak points to explore. I played host to a handful of Magic peers during the weekend and among us, five unique decks were represented, so Standard doesn’t seem to be doing too poorly in diversity.

Unfortunately for myself, I became quite ill early on the morning of the Grand Prix and there was no chance I was going to make it through a day of competition, probably not even the players meeting! I did as much taxi’ing duty as I could handle and then went home for a few hours of sleep.

Sleeved up and ready to go, however, was an updated version of the 4-color Dictate list I talked about a few weeks back. I can’t be sure what final 75 I would have been on, as those last-minute changes and debates never happened for me, but here is the list as I left it the night before:

I won’t go over this list too much, as I have talked about it extensively in the past, but seeing as how it is a descendant of the deck we will be talking about today, I will at least make a note about changes from above.

Basically, Disdainful Stroke answers just about every major threat to this deck outside of Brimaz. Cards like Whip of Erebos, Siege Rhino, and annoying ‘walkers like Xenagos and Liliana Vess all get shut down before they hit play. I think the deck could very likely support 3 copies of Stroke, but as it is so bad in a few matchups, I left a pair in the sideboard.

The idea for the above deck originally came from what most people would classify as CounterBurn. CounterBurn is an old strategy, and does exactly as its name would suggest. You control the opponent’s board development with countermagic and removal while either setting up for a big burn turn, or throwing various points of burn at them whenever the opportunity arises.

Generally, these kinds of decks look to find cards that cross over well, as having 20 pure burns spells and 16 pure counterspells is not going to run very smoothly. Instead, cards like Electrolyze or Prophetic Bolt replace themselves and give you some card selection. Or perhaps a card like Mindswipe acts as both a burn and a counterspell. With these flex cards, the deck is more easily able to reach critical levels of each desired card type.

Of course, of those cards I just mentioned, only Mindswipe exists in Standard, so how do we build a modern day CounterBurn deck? We would want something that has quick closing speed but that can also grind out wins against the various midrange decks or the ever-annoying Whip of Erebos. That is a hard space to find, because it means we need utility spells for the most part, but also a way to emit a large burst of burn when we needed to end the game. If you look back to my Dictate list, you can see that Dictate of the Twin Gods is trying to do just that. If I end-step out a Dictate, all of a sudden, the two Lightning Strikes and Magma Jet in my hand go from being rather benign to 16 points of damage and a quick win.

One way we could look to tackle this problem is through big X-spells. Both Crater’s Claws and Mindswipe allow us to turn our mana into damage. And before PT Hawaii, that is exactly where we began. Mindswipe seemed more gimmicky, so I never think we went above two in our main deck, but Crater’s Claws was a four-of at various points.

Unfortunately, although Crater’s Claws could win the game in the late game, it had to be done on its own time. Investing six mana into a 5-damage spell was not very impressive. Without any creatures to enable ferocious, the card just couldn’t pull its weight.

Mindswipe was in a very similar space. Because it is a counterspell, you want to actually counter something with it and hopefully something that is relevant. So when your opponent plays Sidisi on turn 4, your Mindswipe becomes Countersquall and not the Blaze for lethal that you were hoping. Granted, this ability to end games does make the card much more bearable to draw late, but you cannot just sit on a Mindswipe in hand and expect to win the game with it some dozen turns down the line.

Of course, closing speed does not have to be about one big damage spell, but could also be about a bunch of little ones. The Dictate end-game combines both of these by using Dictate as a large damage source but it feeds off of a bunch of small damage sources to get there. The easiest way to build up a critical mass of small damage spells is through drawing more cards. Luckily for us, Treasure Cruise does a great job of that for a very reasonable price in a deck with only a few permanents.

There are not really many cards that offer us card advantage with a burn spell. The most notable is Master the Way, but it’s tough to turn it into a true win condition. We need our burn spells to protect us early on. If we have resolved enough Treasure Cruises to have a full hand of five or more cards, then why do we need a five-mana sorcery to reap the rewards? We should likely have enough burn through sheer card advantage to end a game.

I think Master the Way has potential, and we tested it for a bit in our Face Time decks, but it is likely a one-of or less.

Instead, we turned to another five-mana burn spell to look for our answer: Riddle of Lightning is a card that I have been in love with since Time Spiral, where it could reveal Greater Gargadon to absurd effect. We can replicate that effect here, and with Fate Reforged we can go even bigger.

On the surface, Riddle of Lightning seems like it has many of the same qualities of Master the Way. It can be inconsistent and it does cost five mana, which is about the highest we are willing to go. However, scry 3 is not unreliable in a deck with a sufficient number of spikes, especially when it is aided by other scry effects, such as Magma Jet. At instant speed, the upside is so much higher. When Master the Way is hitting for 2 or 3 and not 6 or 7, it also leaves you vulnerable for a turn.

Riddle of Lightning has an upside of 8 or even 11 damage, which is not just strong but game-winning. When you deal 8 to the opponent and then untap and cast the Treasure Cruise you just teased, the game is over. Even a Riddle for 5 into another Riddle is an extremely strong play. With Fate Reforged, we get to go to 11 with Temporal Trespass. We can’t pack too many delve cards in our list, but a pair of Trespass alongside 4 Cruise is a lot of threatening cards floating around in your deck.

In this list, we use Temporal Trespass for its high potential damage output, but because we do not actually abuse the extra turn that well, it might be correct to just use Dig Through Time as our supplemental big spell. Drawing a couple of cards is definitely better than an extra turn in this list.

We use a card like Arc Lightning over Anger of the Gods in our main to maintain the right amount of direct damage. Perilous Vault cleans up messes Sidisi and other aggressive midrange decks make just fine. We really just need to stem the bleeding from a strong mono-red aggro draw or a fast tokens start, and Arc Lightning does that nicely.

We could pretty easily move away from a low permanent count, and instead permanents to deal a significant portion of our damage while combo’ing with Temporal Trespass. Keranos, God of Storms is a great example here as we get additional shots at its trigger with an extra turn and without lowering our total damage output.

I like the general idea, but it might stretch itself too thin. It needs to have each of these little pockets of like cards and those packets all have to come together in the right waye. In an ideal world, everything is firing on all cylinders as Jace finds a Temporal Trespass for us to Riddle our opponent with, on both their turn as well as our upkeep for the win. Sounds great, but that takes a lot of work.

We lost quite a bit of burn going to this new version, but hopefully some of the sustained damage from Sarkhan, Chandra, and Keranos helps to make up for that. Additionally, Riddle of Lightning does a decent amount more damage in this deck. The curve is higher and there is an additional big spell to spike in the third Trespass.

While Fate Reforged is still relatively unknown, enough cards have been spoiled to at least start looking forward. I included Temporal Trespass in my lists above because it was fairly essential to the 11-damage plan, but any of the cards below could find a home in one of the above lists. I advocate testing these before taking them for a spin, but give them a shot at least! 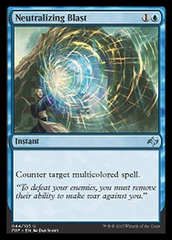 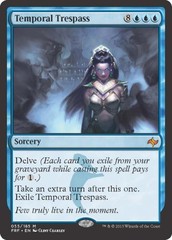 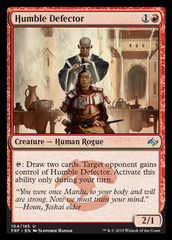 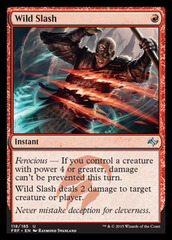 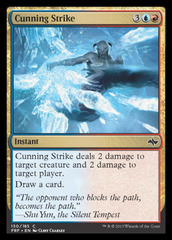 Next week, I plan on writing about a spicy Modern list I am sleeving up for Omaha. Wish me luck and until next time, thanks for reading!