When I discussed Gishath, Sun’s Avatar, I talked about how our expectations for a card influence how we evaluate it. Well, Sunbird’s Invocation is another such card where you’re probably going to go into it assuming one thing, then realize that it’s something else entirely.

Typically, most Magic sets have a rare, red sorcery or enchantment with far too many lines of text that costs 6 or more mana. Sometimes these cards are junk, and sometimes these cards are great in non-competitive formats like Commander. I’m looking at cards like Alpha Brawl, Form of the Dragon, Goblin Game, Grip of Chaos, Guild Feud, and Mindblaze… there’s a ton more, but these are the kind of cards I’m referring to. Usually they have huge, splashy, game-altering effects that are hard to control and can end up costing you more than your opponent. 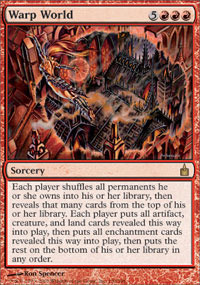 Some of these cards are really cool. I remember playing Warp World in a Modern deck that my Community Cup mate Björn Andreasson provided to me, and it actually performed quite well. If nothing else, it was certainly fun, because you never knew what was going to happen when those cards started appearing off the top of the deck.

My initial thought here is that Sunbird’s Invocation is Ixalan’s contribution to this trend of red cards, and it’s actually a pretty good one. I wouldn’t be surprised if it saw competitive play. This card has a lot going on, packed into a fairly simple effect. Let’s try to unpack it a bit.

The initial excitement for this card is that it combos well with Approach of the Second Sun. In that way, you’re looking at casting Sunbird’s Invocation on turn 6. You untap and cast Approach of the Second Sun. Before Approach resolves, your Invocation triggers. This lets you look at the top 7 cards and cast one of them with converted mana cost 7 or less. If there’s a second Approach in there, you’ll cast that first, assume it resolves, then when your initial Approach resolves, you’ll win the game. Assuming everything goes well, that’s a two-card, win-the-game-on-turn-7 combo. That’s pretty strong, despite the fact that it likely requires you to play all 4 copies of Approach of the Second Sun. After all, it wins on the spot—you still play 4 copies of Dragonstorm even if you don’t want to draw multiples in your opening hand!

Where Sunbird’s Invocation really shines is that the ability is just plain good. It doesn’t only trigger when you cast an instant or sorcery. It doesn’t only allow you to cast spells that cost less than the one that triggered it (like cascade). The only caveats here are that all the numbers are connected, ala Uncage the Menagerie, which can make your smaller spells less impressive. A 2-mana spell reveals two cards and you can cast a spell that costs 2 or less. A 6-mana spell reveals six cards and you can cast any spell that costs 6 or less.

In a way, Sunbird’s Invocation and Gishath are similar. They both allow you to play things for free after a sizable mana investment with very few restrictions. This isn’t a common trait for red cards since you often expect to pay a higher “price” (be it mana cost, discard, randomness, etc.) when it comes to their card advantage. In fact, this reminds me of a slightly more expensive Outpost Siege effect.

Now that all of Ixalan has been revealed, I’m eager to see what people can put together, not just in the context of an Approach of the Second Sun control deck (which seems difficult to combat without counterspells), but also when using the enchantment as a card advantage engine in a midrange deck. I’m curious to see what you guys think of the card, so be sure to leave some thoughts in the comments. Thanks for reading and I’ll catch you later!