If you think about the most broken cards and decks in the history of Constructed Magic, the trend you’ll keep seeing is the ability to break mana restrictions. How can I make plays I shouldn’t be allowed to make with this number of lands? That’s part of the reason the convoke mechanic is so fascinating.

Conclave Tribunal is a versatile removal spell that can answer anything from a blocking creature to a Teferi, Hero of Dominaria. At face value, Conclave Tribunal costs 4 mana, but due to convoke, a weenie creature deck might be able to cast it with only two lands in play. In other words, a highly compressed deck with a low land count can still have access to this as a catch-all.

A deck like this is fast, sleek, and consistent. The high concentration of 1-drops make Legion’s Landing, Leonin Vanguard, and Benalish Marshal as strong as they can possibly be. But they also provide mana for Conclave Tribunal to answer that key blocking creature. You can even freeroll that mana by using freshly cast creatures to convoke, allowing you to dump your whole hand by turn 3 or turn 4.

Now, I know what you’re going to say. Why am I bothering with all of these 1-toughness creatures when Goblin Chainwhirler is legal? It’s true that Goblin Chainwhirler is a strong card against such an archetype. But when I covered Standard at GP Richmond, I saw a R/W Tokens deck performing well, and I gained hope that the token strategy might not be as dead as we believe.

These decks are so fast and powerful that they can win more than their fair share of the games where Chainwhirler is not involved. Moreover, this Tokens player employed two creative ways to beat the Chainwhirler’s trigger. 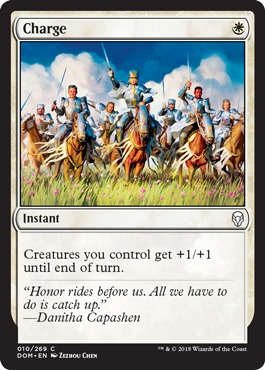 Charge is a 1-mana spell that can help you unload damage or win a key combat step. It can also be used to “counter” a Goblin Chainwhirler trigger.

Tocatli Honor Guard should likely be relegated to the sideboard, but is another cheap creature that incidentally stops Chainwhirlers. It’s also a prime target for the new mentor ability.

Mentor, by the way, is another intriguing ability for low-to-the-ground creature decks, and makes Legion’s Landing and Leonin Vanguard even stronger. Here’s a W/R take on the archetype:

Boros Challenger is perfect for a deck like this. It can attack for 3 damage on turn 3 (when you count the mentor trigger), and provides a permanent advantage even if it dies later. It’s also a mana sink, which is precious for a deck that ordinarily can’t make great use of lands beyond number 3 and 4.

Chainwhirlers are still out there, but let’s not live in fear! Let’s see what Guilds of Ravnica can bring to weenie creature archetypes. Our prospects only stand to get more exciting as more cards with convoke and mentor get previewed.