Gods are nothing new to Magic. Theros brought us a suite of deities that were largely useful in Commander (only in Commander nowadays, with a notable exception in Keranos and some fringe applications for cards like Ephara) so it’s nice to see a fresh crop. This batch is mono-colored, which is a little bit of a bummer, but I find them, and the restrictions they give us, interesting. I also suspect that Commander players will be the majority of the audience for the Invocation versions of the Amonkhet pantheon, and it’s always nice to feel like something was created for you. Strangely, my objections to the Invocation frame and font fall away when they are applied to the Gods. For some reason, it feels right on them and wrong on the spells to me, but I digress. I’m not here to talk about the frames. I’m here to talk about the games! Games I’ll be playing with this card:

Hazoret struck me as a card that flirts with a borderline unfun restriction—having cards in your hand is fun, while having an empty hand is often frustrating. Hazoret is slightly merciful in this regard, giving you both a discard ability and a little leeway on being hellbent all the time. One card is a lot more than no cards at all. Hazoret seems like it would synergize well with creatures that have embalm, but I haven’t seen any creatures with embalm in red that seem like they fit the bill.

There are some other cards from Amonkhet that I would like to drop in the list, though, so let’s talk about those before we move on to some more synergistic options. 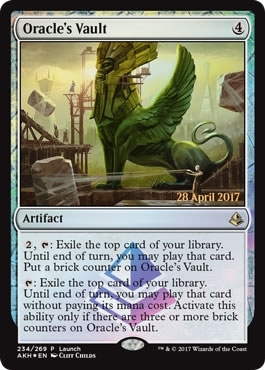 Cards that give you more plays without clogging up your hand are exactly what you need. Once the Vault is built up properly, you won’t even have to pay for what you hit, leaving you more room for other shenanigans.

Even though the trigger is card-neutral, you’re going to be playing a lot of cards that want you to discard them, so you might as well play more cards that allow you to do this sort of thing. Plus, I enjoy trying out new cards—we’ll see how good it ends up being.

Now let’s dig into some older cards that seem exciting in concert with Hazoret: 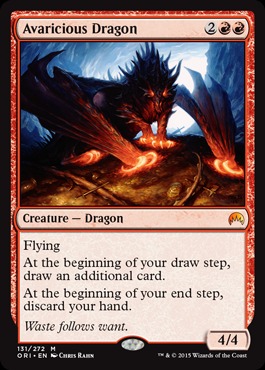 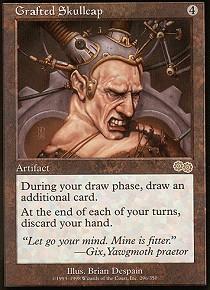 If you’re newer to the game, you might not know that Avaricious Dragon is based on the design of Grafted Skullcap. Both cards give you exactly what you want—an extra draw every turn, without the calories. As long as you can divest yourself of a card, Hazoret can keep beating down, and indestructible Commanders tend to be fairly good Commander damage vectors. 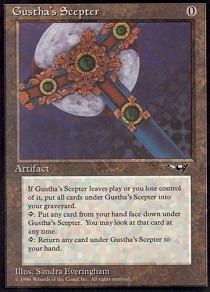 Okay, this one is kind of a deep cut, but like many cards that were featured in the Magic: the Gathering Official Encyclopedia, Volume 1: The Complete Card Guide its text is lodged firmly in my brain for all eternity, crowding out information that might be useful in my day-to-day life. Fortunately, I am a Commander writer, so this actually helps me a little bit. Gustha’s Scepter lets you tuck unwanted cards under it for safekeeping and retrieve cards when necessary. If the Scepter leaves your control for any reason, the cards just go to the graveyard, which is honestly no problem at all. 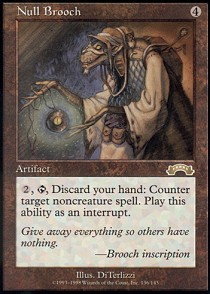 The first time I discarded my hand of no cards to counter a spell, my opponent got pretty confused and angry. Of course, we were about 14, and we didn’t really understand the nuances of the Magic rules yet, but I managed to get this one right. If your goal is to keep your hand empty, Null Brooch is a pretty great card to include—it keeps Hazoret in battle mode and acts as a deterrent simultaneously. 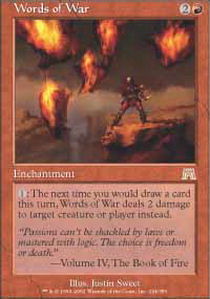 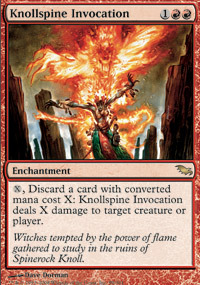 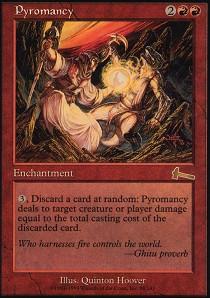 I think Pyromancy was supposed to be a fixed Stormbind, so it’s no surprise that the card looks somewhat anemic now. That being said, it fits in well in this deck, where you’ll be hurling cards with precision due to not having very many in your hand. Knollspine Invocation requires heftier payment for larger cards, but it still does the job you need it to do. 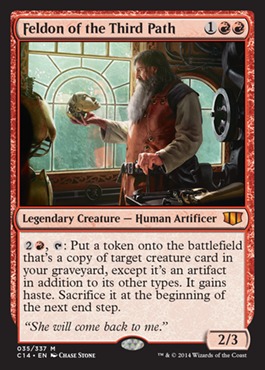 Feldon fits in here without any trouble. Any sweet creatures you discard can be brought back over and over again to wreak havoc on the board as long as you can keep Feldon around. Cards like Bedlam Reveler or Combustible Gearhulk can give you more cards to play with, and even a single activation of a card like Jaya Ballard, Task Mage or Latulla, Keldon Overseer can make a big difference. Feldon is a facilitator, and he can’t do much alone, but your strategy will provide him plenty of fuel. 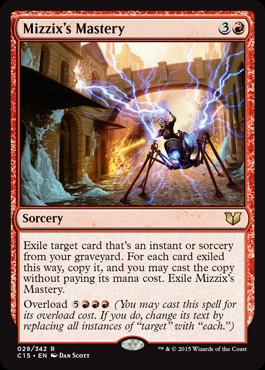 If Feldon is an engine, Mizzix’s Mastery is the whole car. Ideally, you can cast this overloaded and go to town. 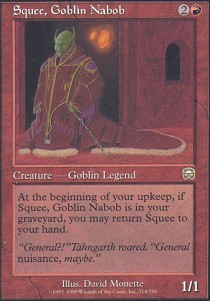 Squee is pretty much required in a deck like this. You have plenty of discard outlets, so Squee will be the source of a ridiculous amount of value, and when you’re playing a Commander that wants you to dump your hand, you have to get your value somewhere. I almost didn’t spotlight Squee because he’s an obvious inclusion, but I figured that would be irresponsible.