In a month’s time, millions of games of Standard will have been played and everybody will have a good idea about what the format looks like and how the cards interact with one another.

But for now, we think, we wait, and we imagine…

And Carnage Tyrant has really captured my attention for the time being.

My reaction to seeing the card on the spoiler was: What in the world!? This cannot be real.

I have a pretty high threshold of imagination when it comes to Magic, and it takes a lot to blow my mind in terms of a busted card. With that being said, the last time I felt this strongly that a card was so obviously out of control?

Siege Rhino is different because it only costs 4 mana. There is a huge difference between 6-drops and 4-drops. With that being said, I feel like Carnage Tyrant is such an obviously special card that it is a foregone conclusion that it will play a big role in Standard.

What Does it Take for a 6-Drop to Be Great?

I’ve spent some time imagining how this card will play out. In fact, this particular card stands out to me as a format defining card.

First things first—to make the claim that a 6-drop will be format defining or warping is a pretty bold claim in and of itself. 99.9% of the time, such a claim will be proven false. Standard is not generally about 6-drops. Most 6-drops (even very good ones) tend to be unplayable.

Not all 6-drops are unplayable. Some occasionally define formats.

In order for a 6-drop to be great in Standard it needs to do one thing: Take over and win the game all by itself.

I believe that I can safely make the assertion that Carnage Tyrant has the potential to be such a card. Not just a good card, not just a great card, but a format defining card.

For starters, when I look through the Ixalan spoiler, I think that Carnage Tyrant is possibly the most pushed card in the set. On top of simply having absurd stats at a great rate, the abilities have strong upside.

Uncounterable and hexproof make the card extremely difficult to interact with outside of global sweepers. Historically, one of the best ways to interact with format defining 6-drops has been to counter them. You trade up on mana and the opponent wastes their turn tapping out.

Once the Tyrant hits the board (and it will hit because it is uncounterable), the other two abilities come into play. Hexproof means that it is impervious to 90% of traditionally played removal and trample ensures that it cannot be chump-blocked in combat.

Context Is Everything: G/R Nearly-Block Dinos

I’ve often said that Magic isn’t about good cards but about cards in context. There are plenty of great cards that never find decks.

It is important to note that there are several great setup cards that help ensure that Carnage Tyrant is effective. In particular, two strong cards that nicely lend themselves to an aggro/ramp archetype.

Even better than Carnage Tyrant?

The existence of this card provides the perfect context to make Carnage Tyrant a 6-drop for the ages. As formidable as Carnage Tyrant is, there is a possibility that Regisaur Alpha is the most important Dinosaur in the set.

The ability to power this Dino out on turn 4 for value and then follow it up with a hasted Carnage Tyrant is cascading advantage that is likely impossible for most decks to overcome in terms of size, speed, and effectiveness.

In case it wasn’t 100% obvious that tribal Dinosaurs was a straight up out-of-the-box playable strategy, the deck above is essentially Ixalan block legal. All the best Dinosaurs from the set alongside the best Dino-synergy cards. The strategy is competitive without even trying.

If you wanted to build a Dinosaur deck, it isn’t very difficult to get started. The Dinos are easily the most pushed cards in the set in terms of power level, there are a lot of them, and there are plenty of synergy cards to go around.

Which brings me back to my initial point about cards in context.

The context seems very good to push an extremely pushed card (Carnage Tyrant) over the edge of being a simply great card to a format defining powerhouse. It’s even debatable whether or not it is the contextually best Dinosaur in the set against Regisaur.

It also seems easy enough to splash white for other key Dinosaurs and Prepare // Fight out of the sideboard. 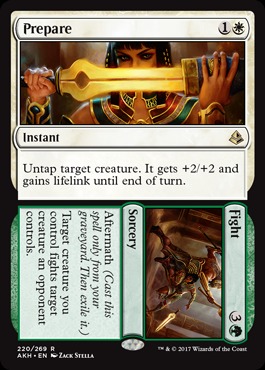 Against a red deck, untapping with a Tyrant and a Prepare seems like game in most scenarios!

What Does Carnage Tyrant Mean for Magic?

I wanted to round my discussion out with some abstract thoughts about the card Carnage Tyrant.

In the abstract and on the surface, Carnage Tyrant feels like the kind of card that symbolizes what I dislike about modern Magic. I imagine the card will be obnoxious to play with and against. It is very obviously an example of power creep. It is intentionally granted multiple abilities that make it nearly impossible to interact with on the stack or in play.

When I look at a card like this, my gut reaction is that design created a card that is obviously stacked and is intentionally obnoxiously difficult to interact with to boot.

I also dread playing against a card like this in Limited. It feels like it’ll have a roughly 96% conversion rate to victories. 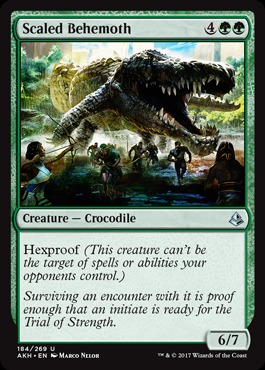 What a weak card.

I always felt that beating a Scaled Behemoth was a moral victory in Limited, and Carnage Tyrant is a whole level of more obnoxious!

I don’t like cards like Carnage Tyrant. I don’t find cards like these joyful to play with or against. In my opinion, Magic is most interesting when players have lots of options and lots of variable events can happen in a game. Carnage Tyrant is the epitome of a card that doesn’t create options, but rather takes them away.

These are the pessimistic sides of my reaction about this particular printing.

On the other hand, I’ve largely gotten to a point with Magic where I try not to be emotionally invested in the existence of cards or decks. I play whatever I think is good and I work on solving problems. I try not to waste my time complaining about them. I’ll tell you that my initial reaction to the card was one of confusion and disappointment because I find it unlikely that it will create the kind of games that I most enjoy playing in a tournament setting.

Yet, Magic isn’t just about playing the kinds of games that you like. Magic is about problem solving and critical thinking. I think it takes a lot of guts to print a card like Carnage Tyrant along with a home to help it perform in Standard right now. I’d rather Wizards continue to push the envelope and print powerful spells.

I also understand that Carnage Tyrant is sort of the focal point of the set that highlights the Dinosaur flavor theme which is also significant. I’d rather the Dinosaurs be pushed in power level than unplayable and uninteresting. I certainly think that the Dinos are pushed to a level where they will be undeniably playable in Standard in the coming weeks.

Anybody who has ever seen Jurassic Park understands that the Tyrannosaurs are terrifying and Carnage Tyrant certainly terrifies me as a Magic card.

I think Jeff Goldblum had it right when he said:

Perhaps the best way to fight Dinosaurs is with fire and by going fast. Red is certainly back on my radar as a way to get underneath Carnage Tyrant and Regisaur Alpha.

Still, I’ve never seen a card quite like this one.

I am the Lizard King. I can do anything. Or, will I hope that Carnage Tyrant goes extinct?

I guess I’ll just have to wait and see. All I know is that I hope to open a Carnage Tyrant at the prerelease and draw it every single game!