Several weeks ago, Mike Sigrist posted a first stab at a power ranking for Ixalan’s commons in Draft. Of course, a healthy number of those commons are the obvious removal spells, as well as the aggressively-costed creatures that define some of the tribal archetypes. At the beginning of a Limited format, there is no shame in starting your evaluation with the powerful removal spells that will see play no matter the archetype. Siggy’s Top 10 lists of power commons and uncommons, combined with LSV’s Limited set reviews, should definitely provide a foundation for any and all Draft analyses of the early format.

Over the course of a format’s lifetime, these initial takes can quickly become outdated as players gain experience with the major Draft archetypes. Nearly a month into Ixalan draft, it is time to explore some of the underrated commons.

Part of the beauty of a tribal set is that many commons fluctuate in value based on the presence or absence of their corresponding support cards. River Heralds’ Boon is perhaps the most blatant example of this phenomenon, where it can often provide two cards worth of value as well as the tempo swing of a well-placed combat trick—if there are Merfolk around to pick up the extra counter. Without them, River Heralds’ Boon is merely a 2-mana Battlegrowth. In this article, I pinpoint some of the cards that will both indicate to a savvy drafter when a tribal archetype might be open, as well as some of the “lesser” tricks that players should include more frequently than they currently do.

The only reason I include this card is because of its absence in Siggy’s rankings. No one is denying that a Griptide reprint is always going to fall between “playable” and “incredible” depending on the format and the deck it’s in. If you are playing Merfolk, you definitely want this card, as you’re going to be eager to acquire any pseudo-removal in U/G. In particular, in a format with Dinosaurs, you can gain mana on the exchange with a 6-mana monster and send in the team for a game-swinging alpha strike. No one is underrating this spell, but it would be an egregious oversight for me to forget to mention it. I’ll leave it at that.

One of the best payoffs for playing U/G Merfolk in Ixalan Limited. 2 or even 3 copies of this powerful trick are always welcome, as the curve of Shaper’s Apprentice into Tishana’s Wayfinder into another 2-drop and a River Heralds’ Boon is going to lead to a lot of non-games. What Merfolk lacks in real removal it more than makes up for in the potency of this spell, and if you see a Boon floating around late in pack 1, it might be worthwhile to consider jumping in with the fishes.

Skulduggery can wreak havoc in combat as early as the third turn of the game. 1-mana tricks with relevant effects on the game are, if not elite spells, certainly riding the line between mere “quality” and true “premium” effects. Skulduggery has the potential to be a 2-for-1 and will always create a massive tempo swing, so it deserves its spot here. 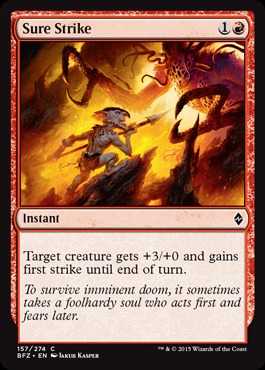 Here we enter the realm of underrated tricks—cards that most players simply aren’t including in their decks often enough. Sure Strike is a plain combat trick, to be sure, but it’s the best red option in the set, and it allows Pirates to attack into a big Dinosaur without fear. With raid forcing your opponents to question whether a suspicious attack only serves to enable a post-combat Storm Fleet Pyromancer, Sure Strike might not enter into their mental calculations to their peril.

Not to mention, this is one of the best ways for a Thrash of Raptors or a Colossal Dreadmaw to break up a double-block and end the game on the spot. R/G Dinosaurs has one other potent common options for combat tricks (coincidentally the next item on this list), but for U/R or R/B Pirates decks, there is much to be said for a copy or two of Sure Strike as a pseudo-removal spell in a removal-light deck.

Awaken the Bear sees a reprint here, and just as Sure Strike allows red Draft decks that might otherwise be light on removal to keep applying pressure through roadblocks, Crash the Ramparts serves the same purpose for low-removal G/W, U/G, or even the normally weak G/B archetype. A 3-mana trick is a significant downgrade from a 2-mana one, so Crash the Ramparts is unlikely to make it into Draft decks in multiples, but just a single copy is enough to occasionally break open stalled boards and punch through for a lot of damage on a vulnerable block. Depending on mana curve considerations, it might be justifiable to play 2 copies of this card, especially in a Merfolk deck with no River Heralds’ Boons.

As Crash the Ramparts is to River Heralds’ Boon, Depths of Desire is to Run Aground. To be sure, Depths is cheaper, can fix mana, and can allow for a jump up to a massive 5- or 6-mana spell a turn early, but there is a difference between putting an offending creature in its owner’s hand and on top of its owner’s library. In an aggressive enough Merfolk or Pirates deck, though, Depths of Desire can buy a crucial turn to swing a game. Like the previous cards on this list, this unassuming bounce spell provides a valuable function for decks without much true removal, and if the game ends before the opponent has a chance to re-deploy all of their cards, then these psuedo-removal spells are just as good as the real thing.

Part of the appeal of the Vampires archetype is an abundance of removal, as Contract Killing and Pious Interdiction provide clean, universal answers to all of the format’s biggest threats. Nevertheless, Vampire’s Zeal is useful in protecting 2-drops like Bishop’s Soldier, and as a 1-mana trick it always deserves consideration in any deck that can make use of it. In a racing-based format, one of the best ways to turn the corner is by protecting and pushing damage with a lifelink 2-drop, and the more Bishop’s Soldiers in the deck, the more desirable this trick becomes.

Not a true trick in the sense that it can’t help your creature to defeat a larger one in combat, Siren’s Ruse is still an excellent defensive measure in Pirate decks, and goes up in value the more removal the opponent plays and the more controlling they are. Responding to a Pious Interdiction or Contract Killing with a Siren’s Ruse is a true delight, and if you feel inclined to play a healthy mix of tricks to keep the opponent guessing, a single Siren’s Ruse can go a long way toward ruining their “better” deck and embarrassing their higher quality removal spells. Incidentally, the card also re-triggers raid, which can be backbreaking, and Deadeye Quartermaster, for the times where a single Pirate’s Cutlass is insufficient.

There are a few other lower-quality tricks that very rarely make a spot in the main deck (Dive Down, Slash of Talons, Spell Pierce) but the above tricks are all easily worth including over the seventh generic 3-drop creature as they provide a valuable service in this format, perhaps more than in recent Limited formats. Of course, there are a plethora of other underrated commons that have relatively more value than they might have in other formats, given the aggressive nature of Ixalan Limited, and I’ll take a look at those later in the week!