Have you read about or seen Teshar, Ancestor’s Apostle in action yet? It is one of the quirkiest and coolest combo decks in Standard. The procedure of going off alone is a thing of beauty.

But things are about to change. Core Set 2020 is full of spicy additions to the format, and one of them looks as if it’s been made just for Teshar. 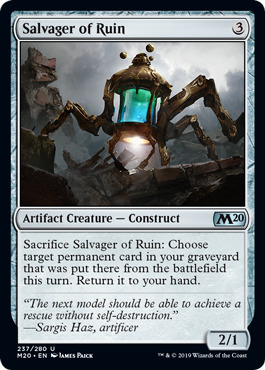 Looping Salvager is much simpler than looping Rona. You only need Teshar in play, one Chamber Sentry in hand, and one Salvager either in play or in the graveyard. The loop then goes like this.

Chamber Sentry can also be replaced with two copies of Mox Amber. This loop itself doesn’t accomplish anything, though. You still need one additional piece to generate an actual benefit. Diligent Excavator allows you to mill all of the opponent’s library and has become the default choice, because its ability can help put Salvager of Ruin into your graveyard in the first place.

Additional options include Ajani’s Welcome or Impassioned Orator for infinite life gain, Corpse Knight for infinite life loss, or Cruel Celebrant for both. Desecrated Tomb or Sai, Master Thopterist will create infinite tokens. I like Sai for its interaction with Mox Amber and Militia Bugler.

It is here where Rona is at an advantage over Salvager. When looping Rona under Diligent Excavator, you can mill yourself and eventually win with any historic permanent that ends up in your graveyard. You can loop Moxen for infinite mana, even if you didn’t have enough of them at the beginning of your combo turn, and then secure immediate victory via Jace, Wielder of Mysteries. Since Salvager only returns a card to your hand that was put into your graveyard from the battlefield, milling yourself never generates new targets for its ability.

This is a problem. Milling doesn’t beat Nexus of Fate, unless it happens so early that the Nexus player didn’t have time to set up anything. Infinite tokens don’t beat Kaya’s Wrath … or Nexus of Fate, for that matter. Cruel Celebrant, meanwhile, has zero synergy with the rest of the deck—and it requires the addition of a third color.

That’s another advantage of the Salvager version: all of the necessary pieces are white and blue. Adding black may yet prove better, irrespective of the Salvager question. Lazav, the Multifarious has been excellent in the deck as a stand-in for Teshar and/or Excavator and as another 2-drop to turn on Mox Amber.

But the option to stay in two colors needs to be explored, so I did. I wasn’t able to get in enough test games yet for a final verdict. I probably haven’t found the optimal build yet. I also didn’t make a sideboard and stuck to Nexus-less best-of-one Standard. However, I had some promising early results:

The above shows my battlefield on turn six. After a board wipe, I began this turn with only one creature on the battlefield, only Teshar and two Moxen in hand, albeit with a well-stocked graveyard. Later in the turn, I was able to generate infinite Thopters, infinite mana, kill my opponent via Diligent Excavator, and draw any number of cards to do the whole thing again next turn, just in case.

Admittedly, the deck rarely works this well. But there may be something here.

What do you think? Does Salvager of Ruin have what it takes? Does anyone have a better version of the deck? Let me know in the comments!