Welcome to back to Brew of the Week! This week, I have an Izzet deck that is a blast to play. I’m not sure whether to call it an artifact deck, a devotion deck, or a ferocious deck, but it certainly contains a lot of flyers, so I’ll just call it UR Skies.

Last week on Magic Online, Niran piloted the above list to 4-0 in a Standard Daily Event and JXClaytor piloted it to 4-1 in a Standard Premier Event.

The goal of this deck is to go turn-1 Darksteel Citadel, Springleaf Drum, Ornithopter, prompting your opponent to check whether they’ve mistakenly signed up for a Modern queue. After they’ve verified that they are in a Standard tournament after all, you play Ensoul Artifact or Ornithopter + Illusory Angel on turn two, and you can beat them on turn four with a Shrapnel Blast to the face.

But artifact synergies are not the only thing going on—there is also a devotion angle with Cloudform and Master of Waves and a ferocious theme with Stubborn Denial and Shaman of the Great Hunt. The deck is truly bursting with synergy! The glue that holds all three elements together is the duo of Ensoul Artifact and Illusory Angel: they provide blue devotion, turn on ferocious, and work well with Ornithopter.

I played several matches with this deck on Magic Online, in a combination of 2-mans and 8-mans. Here are my results:

What can I say? The deck is sweet! Maindeck Master of Waves was pretty good against the inferno of Mono-Red you encounter online, and the card choices felt pretty good overall. The numbers seemed well fleshed out, I had enough sideboard slots to board adequately against every matchup, and the flyers allowed me to beat Courser of Kruphix and Whisperwood Elemental.

The only clear recommendation I have is to add a 23rd land, probably instead of Hammer of Purphoros. An additional idea might be to explore whether cutting one of the three plans (artifacts, devotion, and ferocious) is worth it. The artifact angle could benefit from Phyrexian Revoker, the devotion angle could use Hypnotic Siren, and the ferocious angle might enjoy Crater’s Claws, but the deck is currently too tight to add any of those cards. Cutting one of the angles could allow for a more focused game plan. Then again, Ensoul Artifact and Illusory Angel hold all three themes together, so it may be feasible to retain all of them in the same deck.

A Different Take on UR Skies, Now with More Dragons

And now for something similar, yet completely different. When playing the UR Skies deck, I noticed how powerful flying is in Standard right now. With that in mind, the following flashy combo in Dragons of Tarkir stood out to me: 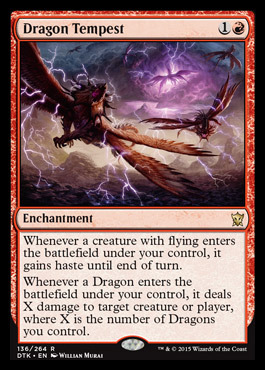 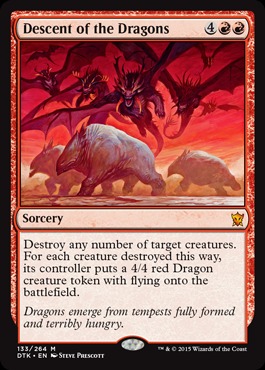 I’m surely not the only one who saw the potential, but it inspired me to brew up the following list:

The dream start is turn-two Battlefield Thaumaturge, turn-three Hordeling Outburst, turn-four Dragon Tempest plus Descent of the Dragons. You target all four of your creatures, ping your opponent for 16, and swing for 16 in the air. Boom!

The deck contains Anticipate and Dig Through Time to assemble the combo, and Hour of Need (which also synergizes with Battlefield Thaumaturge, Dragon Tempest, and Goblin tokens) as a backup plan. If you expect your opponent to board in Drown in Sorrow, then the sideboard allows you to take out some of the combo elements and add a midrange Dragons plan.

This is obviously a rough sketch. The deck may be too inconsistent, and you can get awkward draws with multiples of the independent combo pieces, but it looks like a lot of fun. What do you think? Can a deck like this work?