Originally I planned to write about my Pro Tour experience this week, specifically about the deck that most of my team ended up playing. However, I know that Block Constructed is far from the most popular format, so I figured I could hold off on the subject for another week in anticipation of GP Manchester next weekend when it’s most relevant.

In the meantim, I was excited to take a look at Standard since I have not even glanced at since the introduction of Journey into Nyx. Block occupied most of my time, but elsewhere, States were being played and decks were being brewed. I am still going over various deck lists from States, but I was inspired to work on something of my own while browsing.

Black/white aggressive shells have been interesting to me ever since they fell out of style once the Aristocrats decks rotated out of Standard. Many of the same pieces that had the deck winning before are still around, but the game plan needs to be adjusted a little. Luckily, Theros block saw some minor themes for B/W that I feel really supported the Orzhov contingent from Return to Ravnica Block.

While there are a lot of different directions to take this idea (with more lists below) this is where I would begin the search:

This is an aggressive deck that tries to use synergies focused around gaining life to create advantages that other decks do not generally have access to. There is just not a deck in Standard that you would consider trying Sunbond in. The card has the potential to do some very powerful things, but you do not want to make a lot of concessions in order to gain access to those powerful things as you risk coming out worse for wear in the end.

The above deck, then, is intended to grant you access to some unique and potentially powerful effects that have gone mostly ignored in Standard and competitive Magic as a whole. Some of those cards include: 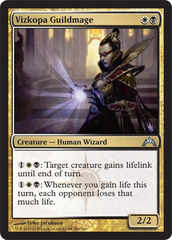 This card has been interesting to me since it came out. It has an ability that is almost boundless if you can find the proper way to use it (if that way even exists). And it’s not like the ability comes on some overcosted garbage card. You get a bear, with two very relevant abilities—all you need to do is be willing to gain some life. Sanguine Bond is a very powerful card, but it comes on a 5-mana enchantment that does not impact the board. Guildmage changes that, and is the real inspiration behind this list. 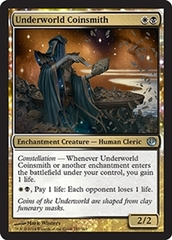 This is the closest thing we have in Standard to a Soul Warden, but it is actually quite good. Most lists will have around 20 enchantments or so, meaning this will trigger a decent amount of the time and then the ability to go straight to the face gives this deck some reach that you tend to not expect out of non-red aggro. Between Coinsmith, Tormented Hero, and the Guildmage, you can deal quite a few damage each game just in life loss triggers.

Remember this card? This is one of the more unique Glorious Anthems we have ever seen but unfortunately for most decks, the abilities on this add up to a downside. Not many decks can take advantage of the life gain and stay above the 20 life mark in order for this to actually be good, but this deck sure can. Triggering Archangel of Thune before blockers is one of the sweeter uses out of this, making me want to up the Archangels right there. This has synergy with Guildmage and Sunbound, should that card be reconsidered.

This is the first deck I can think of that will legitimately use all three modes on the Charm at some point or another. Obviously we want it most because it unconditionally kills creatures, but reanimating a Tormented Hero or Soldier of the Pantheon at instant speed is certainly going to be handy at times. And as for that last ability, the one you forgot all about? Well, we can pick up an Underworld Coinsmith for value, among other things, so I can see saving some number of your cards from a sweeper with that mode on occasion.

Individual cards are not the only thing you gain with this type of list. If you evaluate some of the matchups you might face, you can quickly see how this will dominate any aggressive mirror. Both players are going hard at each other but one of them has access to copious amounts of life gain that just happens to fit into its traditional game plan. That deck is very likely a big favorite.

If it happens to be that we improve those aggressive matchups but drastically hurt slower matchups like control or midrange, it could be that we have simply given up too much and should double back, but testing has proven positive in this regard thus far.

Archangel of Thune was the more appealing 5-drop among it, Sanguine Bond, Obzedat, and Blood Baron. It seems to combine the most synergy with the deck while being an actual card on its own. Sanguine Bond may be cooler with the synergies in the deck, but it is an awful card to turn around a losing game which the Angel does very well.

Blood Baron and Obzedat are both pretty solid cards, but I would argue they synergize less with the deck. Blood Baron might get turned on every once in a while, but you are then making one thing large versus the Angel that spreads the love. Both effects are powerful, but I like the additional anthem from the Angel and evasion is big.

Angel also allows Ordeal to trigger immediately. Imagine you just cast an Angel and you untap and activate Guildmage. You proceed to cast Ordeal on Tormented Hero, triggering heroic, triggering Angel. That’s 1 counter. You then attack, triggering Ordeal and Path of Bravery, you stack it correctly and Path resolves first, granting you a second counter from the Angel trigger. Ordeal then goes off, seeing 3 counters and breaking for 10 more life, triggering Angel yet again.

Assuming you had no other creatures, that sequence deals 14 points of drain before combat damage and pumps your creatures +3/+3 each. Obviously that is a bit of a dream situation, but it comes up, especially when you include redundant pieces in your deck.

Sanguine Bond can stand in for Guildmage in this scenario, for example. And Sunbond on the Angel would do the trick just as well.

The fact that we have so many sweet toys to work with here is likely where we can end up in trouble. The list I posted above is relatively strong as just an aggressive deck, synergies or combos aside. Once cards like Sunbond or Sanguine Bond enter our deck though, we become a lot more about executing a combo and less about falling back on that should plan A fail. There is some merit to both sides, but focusing on the combo seems like a fragile plan, in Standard at least.

We do not have the type of consistency that formats like Modern or Legacy allow. There, fragile 2-card or 3-card combos can exist because the tutoring is so strong that you can generally piece together everything easily. We should not fall into the trap of trying the same thing with so much less.

On the other hand, however, the core theme of our deck is already a bit of a weird one. Gaining life is not typically where aggressive decks look to focus their synergies. Many of the natural incentives for going for this strategy will look just like an excessive “cool thing,” when in reality it is just the reason we chose this direction. Guildmage is the perfect example here. If you were to tell anyone you were playing with the card in Standard, they would likely laugh, and yet I would not be playing this strategy without it, so it is certainly not going anywhere. It is novel, yes, but also powerful. Not every novel idea is just cute. It just so happens that things that look cute tend to be underexplored, meaning that finding something worthwhile in that kind of card is more common than you might think.

As I mentioned before, there are a lot of cards that could work their way into this list, and because most of them are very unique, I do not want to just dismiss them without trying them out. The first place I went was a more enchantment-heavy build, taking full advantage of Underworld Coinsmith.

This build has some interesting lines it can open up on that can completely destroy an opposing aggro deck. Imagine playing a Hero on turn 2 and throwing a Gift of Orzhova on it the following turn. Your 4/4 lifelink flier is pretty scary, but your opponent feels safe for the turn so they play a Jace and tick it down. You untap, play Ordeal on the Hero, then Sunbond. You attack, boosting your Hero to a 7/7 and then Ordeal pops, shooting it up to a 17/17. That is a turn 4 kill from a relatively safe-looking position on turn 3.

The highlight plays of this deck might seem like false advertising, but it is honestly one of the reasons to consider the list. In some number of games you are going to receive free wins by comboing off in one of the many possible ways.

You can certainly lower the amount of these “free wins” and probably add some amount of consistency to the deck, but we do not want to get rid of them altogether as they are an important draw to playing the deck. Here is a more midrange approach that relies less on any particular combination of cards:

This particular list has almost no reliance on any card to execute its game plan, even if certain combinations of cards do have higher peaks than other combinations of cards. We have no Sunbond or Sanguine Bond that is 100% reliant on other things going well before they give you any positive feedback and instead have a pretty reasonable collection of individual threats like Archangel and Desecration Demon.

This is an archetype that I have just begun to explore, so I am certainly not sold on any particular build as of yet. Expect some videos to come out in the near future with me fumbling my way through the interactions in this list and hopefully I will have a solid list to roll out within the next couple of weeks. As always, thanks for reading and I will see everyone at Grand Prix Atlanta!