After talking about some budget-oriented Brawl lists for MTGA last week with a few zero-rare lists, today I’m going to look at some cheap Brawl decks that are designed for paper. At time of writing, these three lists all come in at under $100 when bought here on ChannelFireball, and don’t make too many compromises to their power level for the sake of budget (with one notable exception, outlined below). Let’s get to the lists!

Nissa, Who Shakes the World

It’s no secret that I love big idiotic green decks, and having a one-sided Mana Flare available as your commander is an incredible place to start for anyone looking to slam gigantic monsters into play. Nissa is one of the best cards in Standard, and she’s ready to continue her unbridled dominance by moving into the Brawl format as well.

Commander: Nissa, Who Shakes the World

This is a classic ramp strategy, with early dorks helping to power out game-winning threats. There are so many sweet ones to choose from, many of which are tragically underrepresented in Standard. The best aspect of this list, however, is that it avoids the most common pitfall encountered by ramp decks with the inclusion of Nissa as a commander—the fact that she’s always available means you’re never running out of things to do with that mana you’re generating.

There are a few notable exceptions I’ve had to make to this list to keep it under $100. Questing Beast would obviously be a slam-dunk inclusion were it not for its price tag, while Vivien, Arkbow Ranger also gets the chop. Even without a sideboard, she could have done some work in this deck, but thanks to Mono-Green Devotion in Pioneer her stocks have risen enormously and so she stays on the bench.

If you want to make further cuts, the deck would still be fine without Once Upon a Time, but all the other expensive cards really start to cut into the deck’s power level. Finale of Devastation and The Great Henge both add so much to the deck’s ability to close out games that they probably can’t be cut, and as much as I dislike Arcane Signet as a card, it’s probably untouchable here.

Last week, I highlighted a Syr Konrad list that looked to sacrifice its creatures for fun and profit, and talked about some of the upgrades available to the deck with the inclusion of key rares. The natural progression of that aristocrats-style deck, however, culminates in the promotion of a new commander—Ayara—and a huge uptick in power level as we fill out the 60 with a stack of powerful rares and mythics.

Given Ayara’s set of abilities, we want to include as many black creatures as possible—particularly cheap ones that provide value when they die. You’ll never run out of cards in this list, between Ayara, Dread Presence, Castle Locthwain, and the like, and using early creatures to stall to the late game means you can fully utilize the power of cards such as Liliana, Dreadhorde General and The Cauldron of Eternity.

Filling up your graveyard should be something of a priority, given the creature recursion at every point along the curve. From Eternal Taskmaster to Gravewaker to the power of The Cauldron of Eternity, bringing creatures back from the dead is relatively easy. It also enables a card that threatens to become Demonic Tutor with a full graveyard—who else forgot that Mausoleum Secrets exists?

Thankfully, this deck makes more or less no compromises for budget reasons. There are a few mythic rares that bump up the overall price of this deck—Liliana, Rankle, Cavalier of Night—but these are all highly-playable Standard cards which should retain value through the life of the format, so they’re not bad investments anyway if you’re looking to play this deck. It’s nice to have 20+ basics help keep the cost of the deck so low! 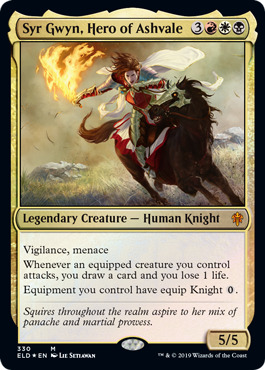 Last, but certainly not least, my favorite tribe in all of Magic—my people, the Knights. Syr Gwyn is a pretty obvious build-around commander, and while there isn’t a huge amount of equipment in the format, there’s still enough to get things going. Besides, there are enough sick Knight cards in Throne of Eldraine to fill out a deck no worries at all, even without the equipment synergies!

In 1v1 Brawl, this deck shouldn’t fare too poorly. It’s aggressive, has first-rate interactive options, and plays well into the late game with cards like The Circle of Loyalty and Knights’ Charge. In a multiplayer setting, things are a little different. You need to be judicious with your aggression to ensure you don’t become a target, as this deck isn’t hugely resilient when it comes to fighting through pressure (or, for that matter, sweepers).

Unfortunately, the three-color mana base really takes a hit thanks to our budgetary restrictions. Cutting three shocklands and a Fabled Passage knocks around $50 off the price tag, and does make the mana noticeably worse. If you have shocklands laying around anyway, definitely whack them in here, as the mana needs all the help it can get.
Outside of that, however, it’s all upside—none of the Knight cards are particularly expensive at all, with only Cavalier of Night and Embercleave being on the pricier side. What’s more, this deck will only get better into 2020, as Theros and following sets bring new equipment (and maybe even new Knights!) with them.

Brawl seems to be on the way back up, so if you’re looking to get stuck in with some paper games, these decks are all great starting points that won’t set you back too much!