I always have fun exploring the Modern format. While the constant changes to the banned list can be hard on collectors, it’s great for the experienced competitive crowd. While everyone knows that Lightning Bolt and Snapcaster Mage will always be pillars of the format, different archetypes cycle in and out of favor as new strong decks come into the forefront and sometimes fall victim to the ban hammer.

So it was with a renewed enthusiasm that I began preparation for Grand Prix Los Angeles. My playtesting notebook was filled with broken dreams and failed experiments.

Which led me to Blue Moon. I tried Blue Moon a bit before Pro Tour Eldrazi and had good results, but it was missing something. Too often you would get a few cards ahead, but then your Remands and Mana Leaks would decrease in effectiveness and it was really hard to finish people off with Snapcaster Mage and burn. I felt like the unbanning of Ancestral Vision might solve a lot of my problems. Here was the first version I tried:

This deck was doing a lot of good things. I loved Ancestral Vision, the low mana curve, the removal, the sideboard, and the mana base. You’ll notice I kept a lot of that shell in my final version. But Thing in the Ice was just too bad. Obviously it was poor against combo decks, but it also randomly gave opponents a great target for Abrupt Decay and Path to Exile, or a juicy victim for Liliana of the Veil. Creature decks could basically ignore it until it was about to pop, and then deal with it. I also felt like 4 Blood Moon was too many. With Serum Visions, Ancestral Vision, and Snapcaster Mage, plus the thinning effect of fetchlands and the incidental card draw Electrolyze and Cryptic Command, the deck was capable of churning through cards quickly. You frequently (although not always) wanted to get to the first Blood Moon, but additional copies were often dead. 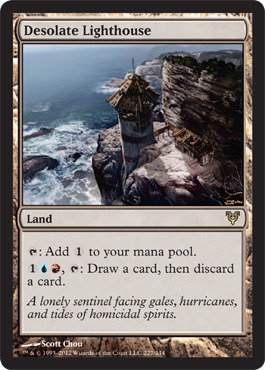 Some people have utilized Desolate Lighthouse here and asked why I didn’t include one. First, in a reactive deck with only 23 land, I feel like you really want all your lands to produce colored mana or you’re going to have to mulligan too much. Second, Desolate Lighthouse does nothing to mitigate “Blood Moon flooding,” as the first Moon turns it off. Third, the mana base is more ambitious than it might seem, as you often want to Snapcaster Mage–Cryptic Command, or cast Anger of the Gods on turn 3. Fourth, I didn’t often find I needed to work through mana floods. You only have 23 lands to begin with—fetches thin your deck, and I really liked Wandering Fumarole’s positioning in a world with lots of Liliana of the Veil and Nahiri, the Harbinger. Fumarole would be my preferred flood insurance.

Thing in the Ice sucked, but I didn’t want to give up. I started to look at what decks were popular in the online metagame. I kept playing against Infect, Affinity, and Jund, but the format seemed extremely diverse. I noticed that some people had been experimenting with Goblin Dark-Dwellers in Ancestral Vision shells online, and this made a lot of sense. I reconfigured the deck with the trigger in mind, removing the uncooperative countermagic (which isn’t great against Infect, Affinity, and Jund anyway). It turns out the removal suite I wanted was hiding in my sideboard! I won 13 of my first 14 matches online with this deck and ended up submitting the following list in Los Angeles.

It’s impossible to do a complete sideboard guide given that there are 40+ decks in Modern and subtle variations within each archetype. So instead, I’ll describe the purpose of each sideboard card and then note which main-deck cards often come out for games 2 and 3.

Blood Moon: Naturally, you want the third Blood Moon versus decks like Scapeshift and Tron. It’s also reasonable versus any deck with weaker/more ambitious mana, like Jund, Dredge, Grixis, Jeskai or Ad Nauseam. Occasionally, you want 1 versus Affinity, but only if you’re on the play.

Relic of Progenitus: This was a last-second addition. I was afraid of Dredge and Storm, but this is the sideboard card to cut if you are so inclined. It has some additional utility versus Melira Company, but keep in mind that it’s kind of a nombo with your creature base.

Batterskull: Your best card versus Burn and Zoo, it’s also pretty good versus Boggles and Bant Eldrazi. Be careful boarding it in versus decks like Jund and Grixis, who may have Kolaghan’s Command.

Dispel/Negate: Because the main deck is so streamlined to work with Goblin Dark-Dwellers, you need this sort of sideboard package versus decks like Ad Nauseam, other blue control decks, and Burn.

Gut Shot: Shines against Affinity, Infect, and Elves. Nice effect against cards like Thalia, Guardian of Thraben and decks that use both Noble Hierarch and Birds of Paradise to cast their spells.

Sun Droplet: A unique, narrow bullet against Zoo and Burn. You don’t normally want this against Affinity since they tend to hit for chunk damage and can also pivot and kill you with poison. I have never lost a game to Bushwhacker Zoo or Burn where I cast this on turn 2.

Vandalblast: Your Affinity insurance. I slightly prefer Vandalblast to Shatterstorm because of the ease to flash it back with Snapcaster Mage and interaction with Goblin Dark-Dwellers. Also nice against GR Tron, Ad Nauseam (where killing a Pentad Prism is often the whole game), and WB Eldrazi Hate Bears, where it can kill both Aether Vial and Tidehollow Sculler.

Molten Rain/Boom // Bust: Sam Black and Matt Sperling persuaded me to play the Boom // Bust over a 2nd Molten Rain and boy were they right. In fact, moving forward I’d play 2 Boom // Bust. There are a lot of decks in Modern that don’t want to get Stone Rained on turn 3. The interaction with Goblin Dark-Dwellers and Bust is something that others like Patrick Chapin used to great effect in Los Angeles and that I anticipate growing in popularity moving forward.

Vendilion Clique: Bad against decks with lots of 1/1 flyers.

Harvest Pyre: Deserves its own special mention as this is the removal spell to leave in against decks like Jeskai Nahiri where you still want to kill Restoration Angel or Colonnade, but the sorceries are pretty bad. Still comes out versus pure combos like Ad Nauseam.

Electrolyze: I don’t bring Electrolyze out too much mostly because of how good it is with Goblin Dark-Dwellers. Against decks where it will literally never even help to kill a creature, like GR Tron, you can take them out.

Spell Snare: There are very few decks, like Melira Company, that have too few targets for this extremely efficient card.

Blood Moon: Fairly easy—you want to take these out against decks that put you under a tremendous amount of pressure, like Zoo, Affinity, Infect, and Burn. Also, remove them against decks like Merfolk, Hatebears, and Elves that don’t necessarily need their lands.

I wouldn’t change the main deck, but here is the sideboard I now recommend:

I hope you have as much fun turning off or blowing up your opponents’ lands as I did.

After taking a break from playing competitively, Paul returned to the Pro Tour in 2009 with a splash. He followed up his Top 8 in Honolulu with a win in Amsterdam and a finals appearance in Paris, all while piloting aggressive white decks!