Size is important in the game of Magic. Your big creature beats my small creature. My bear gets destroyed by your dragon. Your planeswalker wonders if he should list his height on his dating profile when he’s definitely not 8’2 like Garruk.

Such an important consideration needs careful, methodical analysis, to truly determine the most massive, gargantuan and enormous of all the creatures and characters inhabiting the multiverse. You will not find that here.

So, who’s the biggest of them all?

Let’s start with stats. Power and toughness are a reasonable measure for this, I assume, and the mind jumps right to Emrakul, the Aeon’s Torn; the enormous Eldrazi currently trapped inside a moon on Innistrad. Although just because a moon is big doesn’t mean that Emrakul is, but she is a 15/15 which is plenty massive in terms of raw statistical power.

Not to be outdone though, Ravnica offers the Impervious Greatwurm, a 16/16 chonker that looks smaller than Emrakul in its art, but bigger in raw power.

And then we get to the un-sets, with Infinity Elemental and B.F.M. (Big Furry Monster). Then there’s Endless one, how big can that get? 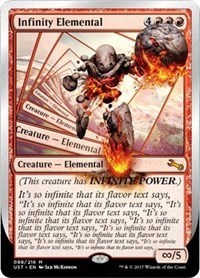 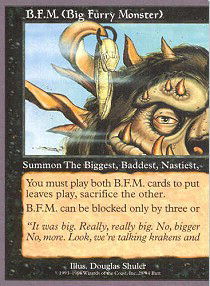 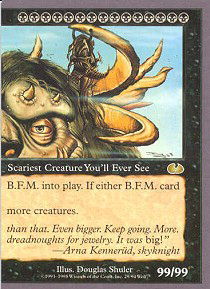 This isn’t working. Power and toughness is an ineffective measure. When a bear is only as powerful as a Goblin holding a lantern, you can’t rely on that scale.

No, we just have to eyeball it.

There’s no shortage of massive creatures in Magic, a whole category of green monsters who tower over other humans in their art. For example, you have Nulltread Gargantuan from Shards block, which is depicted standing over a group of people.

Nulltread is a minnow in a world of giants when it comes to sheer scale though. You can move up a category to statue size with Colossus of Akros, but even that’s small enough that humans can be seen in the art as more than specks. We’re looking for the truly huge.

Polar Kraken is described in its flavour text as “Really big, no, bigger than that. It was BIG”, but then it’s not that much bigger than a group of polar bears, though we’re getting somewhere. Krakens are enormous, similar to another monster sea creature, the massive Stormtide Leviathan. 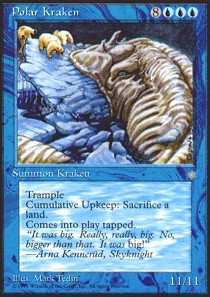 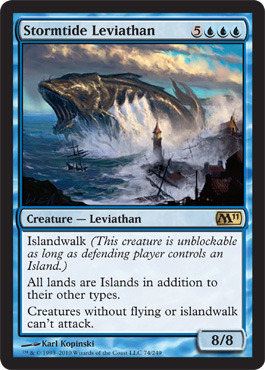 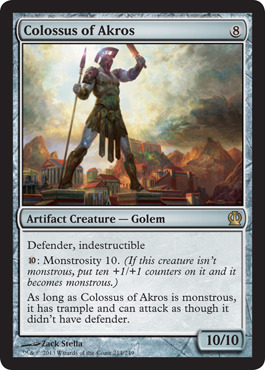 Then again, we can get even bigger. What about a whole town that can move its disgusting mass around the world. Hanweir Township is a bizarre meld of Eldrazi horror and Katamari, with an actual town sitting on its back. Does it count though? Is it even one creature or a combination of many? Regardless, it’s not even big enough to win the title of largest-in-chargest creature in Magic.

Meandering Towershell and Worldspine Wurm both appear to be much larger than the township, and the Wurm is called Worldspine – the spine of a world HAS to be huge. Now we’re getting somewhere, but let’s get even bigger.

Krosan Cloudscraper is so tall it, well, scrapes clouds. If it’s similar in size to a skyscraper we’re talking about a creature whose footsteps must cause earthquakes across the plane. It’s also a morph so it can be totally inconspicuous and then suddenly a truly monstrous beast trampling across the horizon. We are now in the realm of giants. 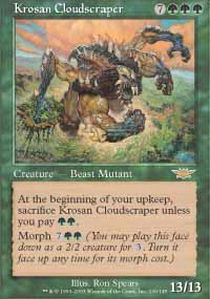 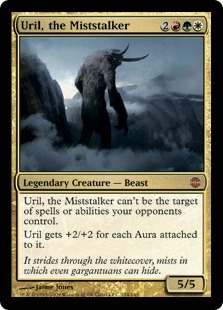 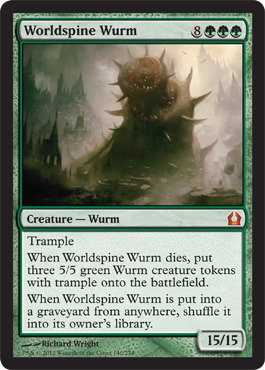 If Cloudscraper reaches the bottom of the clouds, Uril, the Miststalker stands above them. Uril is almost as tall as a mountain, his entire upper body above the cloud cover, but then it is mist, so it’s hard to be sure it’s not just very low. Still though, the mountain in the art suggests Uril is in a realm hitherto unseen in terms of size.

But you’re not satisfied with ‘tall as a mountain’ – because you care about length. Allow me to present Autochthon Wurm’s flavour text: “The trainer awoke to begin the journey from the wurm’s tail to its head. The sun was setting when she arrived.” So this thing is as long as a day’s walk. A DAY.

Wait, how long IS that?

The US Army suggests a soldier can do 4 miles per hour on a loaded march, and let’s just assume the aforementioned trainer is a regular-sized Boros soldier, got up at dawn and walks all day save for a pair of stops to eat, so drop an hour for that. Ravnica is based on Eastern Europe so let’s use Dubrovnik, a coastal city in Croatia, as the location, and pick a date not too long and not too short, a day in April, which gets about 13 hours of daylight. Take that hour for rest and eating away and you’re left with 12 hours. At four miles per hour multiplied by 12 hours, that’s a total of 48 miles.

Frank Karsten would be proud, and that is a BIG WURM. 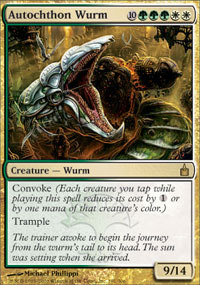 So I think it’s safe to say based on that flavour text, that at 48 miles long if it simply stood straight up on its tail, it would dwarf Uril, who’s only taller than what I’m guessing based on the art are strato-cumulus clouds, which only sit a mile or two off the ground. Uril then, is maybe 3 miles tall.

Even the mighty Progenitus can’t match the wurm, as its heads are still in the clouds on the original art, and clouds don’t tend to form above 10 miles from the ground. We can assume then, that the wurm is easily one of the largest creatures in the game.

What could be bigger than the wurm? It’s the size of a small country, so not much, but maybe Big Furry Monster, an un-card that depicts a creature that’s wearing another big creature, the Polar Kraken, as an earring.

Even B.F.M. though can’t compare to the two true titans of Magic’s massive monsters. Bearer of the Heavens, from Journey into Nyx, is literally holding the heavens above the plane of Theros. There are though, still clouds for scale, so there’s some doubt over whether he’s the biggest. The wurm could just be longer, no one’s stretched out a wurm that big in card art. 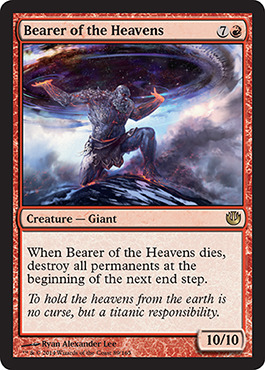 But the wurm isn’t the biggest. Something even larger lurks on the plane… no, above the plane of Kamigawa. Creature, enchantment, land… it’s so large it defies categorization. And it’s a big weird monster vomiting onto the plane’s surface.

Genju of the Realm is a kami, a spirit, from the plane of Kamigawa, one so big that its art shows it standing essentially above the entire plane. Unless Kamigawa is a lot smaller than we think, this thing simply stands atop a planet and doesn’t look much smaller than it. If the Eldrazi ever invade Kamigawa they’re going to rush back to Zendikar with their tentacles between their… legs? …as this thing projectile vomits all over their blind eternities. 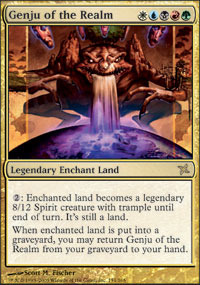 This is the behemoth we were looking for. This monstrous thing is even CROUCHED in the art. What if it stood up? It would probably just pop out of Kamigawa and into another plane altogether. Is that even possible?

When you’re this big, I suppose anything is.

So there you have it, a definitive ranking of the largest creatures in Magic, topped by a land enchantment. From Kamigawa. Vomiting a waterfall onto a planet.