After Emrakul, the Promised End got banned, B/G Delirium shifted to aggro, on the back of Winding Constrictor. But a few cards from Amonkhet could let us return to a more controlling version.

Previous versions that tried to play control would stabilize the board, since Ishkanah, Grafwidow wasn’t as effective at stalling against the Gideon, Ally of Zendikar and the Felidar Guardian combo.

With the combo out of the picture, stalling the game is now easier, and Liliana, Death’s Majesty does that perfectly!

5 is a higher cost than 3, but Liliana, Death’s Majesty protects herself well! Getting back Ishkanah, Grafwidow along with her Spiders is such a huge boost that you will hardly ever lose the game. Often you really couldn’t cast Liliana, the Last Hope before dealing with Heart of Kiran, making her a 4+ drop no matter what regardless

The fact that the new Liliana also mills the top 2 cards is relevant for hitting delirium or for just getting back whatever you mill. I don’t think you should play a split of both—drawing one with the other in play is so bad that I would try going for full Death’s Majesty. 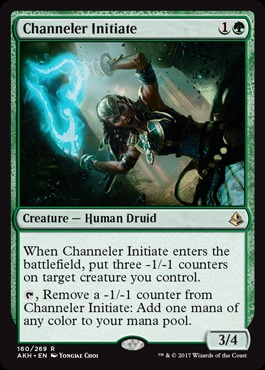 I like this card, especially in a mana-hungry deck like this. You play 24 lands and 4 Traverse the Ulvenwald, which you don’t really want to use to get basics, so mana dorks are important, and this is clearly better than Servant of the Conduit since you don’t have any energy sources.

Unlike R/G Monsters, you don’t want to empty Channeler Initiate‘s counters as soon as possible. You really need your mana dork since this deck has infinite mana sinks.

Main-deck artifact removal was the norm last season, and this time around we get it with cycling 1—sign me up! Good against Vehicles, Dynavolt Tower, and Torrential Gearhulk, there’s really no reason not to play at least 2 in any green control deck. Cycling can enable delirium at instant speed as well, which can be surprisingly good with Grim Flayer.

Despite Felidar Guardian’s banning, I think you should still maindeck this, since being able to Traverse the Ulvenwald for it is a strong option, and as I mentioned before with Dissenter’s Deliverance, there’s plenty of artifacts to be destroyed out there.

This card looks better than Ruinous Path, since you rarely flood, so it’s hard to hit 7 mana to spend in one turn. The value of just milling this card with Vessel of Nascency or Liliana, Death’s Majesty to gain a free Zombie later in the game is also pretty nice.

To the Slaughter, on the other hand, is still a possible 2-for-1, since it isn’t that hard for you to get to delirium. It’s obviously weaker now that 4c Copycat is out, which was a deck that used to play a planeswalker on an empty board so that you could get them without needing delirium. 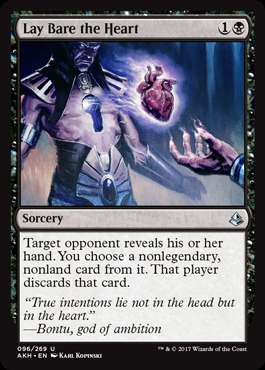 This card is very similar to Transgress the Mind, and I’d like to test it. It can get a 2-mana card like Negate or Harnessed Lightning, but it can’t get Gods or some creatures, though unless you are boarding this against control decks you shouldn’t really bother with it.

Not exiling is also kind of important because of Torrential Gearhulk being able to flashback whatever you discarded. They have similar upsides and downsides.

With Felidar Guardian, I don’t think we need this guy anymore—you don’t need it as an insurance policy against combo now (Manglehorn would have done that nicely anyway) and you always have plenty of targets.

This deck is also very mana-hungry, and you always have so many things to do with your few lands that Walking Ballista looks out of place here.

Keep in mind that with Magma Spray around, there are way more ways to deal with a 2/2 Grim Flayer, so it’s important to make sure to hit delirium first and then play your 4/4 that’ll be safe from removal.

With Felidar Guardian banned, I foresee the metagame becoming more control-oriented, so make sure to have your full set of Tireless Trackers and some Gonti, Lord of Luxury.

Kalitas, Traitor of Ghet will play a key role against the Prized Amalgam deck that’s already putting up 5-0’s on MTGO. It’ll also be fine against any aggressive strategy, though I don’t think I like it versus Mardu Vehicles.