You’re just about to win. You need your opponent to miss on her topdeck for a turn and it’s all over. Your opponent draws—and plays Sentinel of the Eternal Watch! You slump in your chair. You have no way to deal with the Sentinel and suddenly you’re on the backfoot. A couple strong drawsteps later from your opponent and you’ve lost what seemed to be an unlosable game. 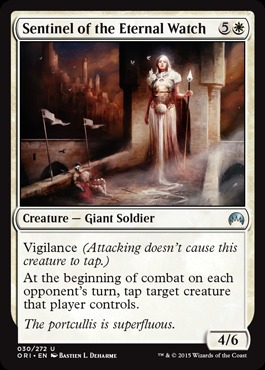 We’ve all been there before.

Bombs play a big part in draft matches, and are an important facet of Magic as we know it. Without them, board stalls would advance until a player naturally decked out. But at times they can be frustrating. It seems like there’s almost nothing you can do to stop your opponent from just “having it.” But that’s a false notion. Bombs are beatable, and I’m here to tell you what you can do differently in your games to give yourself the best chance to do so.

If your opponent never has the chance to deploy her bomb, then that bomb card ends up being worse than a basic land. Draft a strong curve and ways to keep your opponent off balance, and you can end the game before bombs become relevant. This strategy goes perfectly with Magic Origins since the format is all about tempo. Tempo-oriented cards have gotten much better in recent years as removal has gotten worse, and combat tricks like Titan’s Strength and Enshrouding Mist are now legitimately good. I even like Grasp of the Hieromancer and Call of the Full Moon despite the risks, because if unanswered they will end the game very quickly. 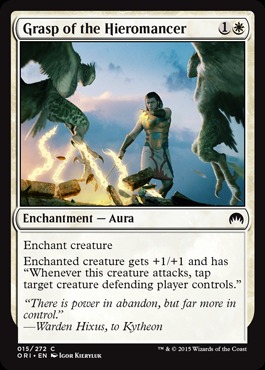 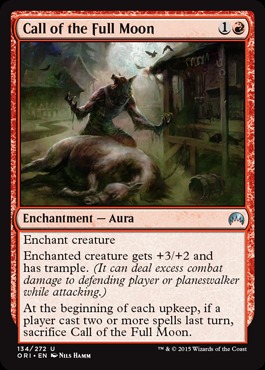 Being aggressive will sometimes put you in a position where you have to lose value or even 2-for-1 yourself. A disciplined Limited player will recognize that this is a losing strategy and hold back attacks and wait for a better opportunity. This is generally correct, but if you are heavily outmatched by your opponent’s deck, you’ll need to be extra aggressive and do anything you can to push through damage early. When the late game is your enemy, you might need to cast Fiery Conclusion on turn 4 just to remove a blocker and get in an extra 3-4 damage. Is this always correct? No, but it can be a good decision at times to get under any bombs that may come down later. Assess how your deck lines up with your opponent’s and determine whether a more aggressive line is your best chance to win.

This idea of aggression also applies to mulligans. When I draft more midrange or controlling decks, I keep 4- or 5-land hands since they’ll have more late game to draw to. You simply cannot keep slow hands in aggressive decks with a low curve. For example, if you have an RW deck with two 1-drops and six 2-drops, and your opening hand on the draw is two Plains, two Mountain, and three 3-drop creatures, you should mulligan. You’ll end up drawing weaker cards than your opponent as the game drags on and you won’t be able to apply enough pressure. If the Vancouver mulligan rule is put into place, then a mulligan here becomes even more correct.

Hold Onto Answers Whenever Possible

Most decks will not be quite as all-in on an aggressive plan. Consequently, more bombs will get cast in games involving them. When two midrange decks play against one another, resources become the main deciding factor rather than tempo. An average midrange deck will have a couple catchall answers in it like Claustrophobia or Unholy Hunger to deal with problematic creatures like Skysnare Spider. If you use these few removal spells on earlier creatures like Pharika’s Disciple that you could have instead traded with via creatures, you’ll then just get run over by the Spider and end up wishing you had saved your removal. 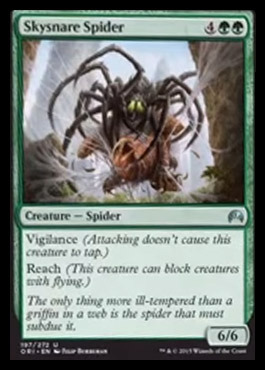 This gets trickier in a format like Magic Origins where blocking is much more common, so creatures are constantly trading and combat tricks can act as removal. It can be tempting to use a Claustrophobia on anything that moves, but instead consider where the game is headed. Say your opponent leads a 2-drop on the play that trades with your 2-drop, and then follows with an Orchard Spirit. You have a Claustrophobia and 4-drops in hand that you can cast, but no fliers. However, you have 5 fliers in your deck that can block Orchard Spirit later if you draw them and your 4-drops can likely race the Orchard Spirit regardless. Without thinking you might just use the Claustrophobia now, but then lose to an unanswered Skysnare Spider a few turns later when you could realistically beat the Orchard Spirit without using Claustrophobia in the first place.

Use removal sparingly if possible. Of course, if you have more removal than average, suddenly it’s wrong not to use a removal spell on the same Orchard Spirit. Use context and your best judgment in these scenarios.

It’s game 2 and your opponent beat you with Kothophed, Soul Hoarder in a long drawn-out game 1.

Game 2 is looking similarly dismal as the game goes long and your opponent gleefully taps out for Kothophed on turn 8. You greet the Demon with a boarded in Bone to Ash and then proceed to win 5 turns later! 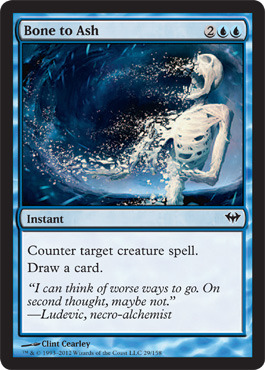 Sideboards have become increasingly important over the last 5 years of Limited Magic. As removal becomes more situational, it has become harder to answer certain types of cards. But that also means that there are more instances for situational sideboard cards to shine. Bone to Ash is not a particularly good card in Magic Origins draft but it is quite good at stopping bomb creatures given the right circumstances. Smash to Smithereens is not at all maindeckable, but it can help your aggressive deck win before your opponent stabilizes with a Guardians of Meletis so that you never have to face down the Sentinel of the Eternal Watch that beat you in game 1. Orbs of Warding is a mediocre rare, but when your opponent has Whirler Rogue and other Thopters with and a Chandra’s Fury for reach, it starts to look a whole lot better.

Any time you can take a high impact sideboard card over a mediocre playable I strongly suggest you consider doing so. You might slightly weaken your main deck, but you’ll now have access to solutions that can answer otherwise unanswerable problems. This is a little harder to do in Magic Origins draft since the set is shallower than many recent sets, but it still holds true. If Battle for Zendikar ends up having a plethora of playables, then drafting sideboard cards highly becomes an even better strategy so keep an eye on this idea moving forward.

Beating bombs is not an easy task but it is possible. Next time you lose to some crazy busted rare don’t complain about it. Rather, think about whether you could have altered your strategy in-game to play around it or drafted an answer. You’ll come to find that more often than not there was a solution. It’s very hard to plan for everything, but the more you practice and anticipate the questions your opponents will be asking, the more prepared you’ll be.

Good luck in your drafts!