As these things tend to go, I’ve accumulated enough tidbits of value to write another article. I was going to say “nonsense,” but a couple of them aren’t quite full-on nonsense, or so I’d like to believe.

On Banned and Restricted Lists

Let’s start with a topic that’s very much not nonsense, unless you think that it kills Mishra’s Workshops decks in Vintage (it does not). Earlier this month, the Banned and Restricted list update saw the following action:

Eye of Ugin is banned.

Sword of the Meek is unbanned.

I have to admit—I’m excited about these changes. I wouldn’t have hated seeing Gush (and possibly Dark Petition) get restricted as well, but Workshop decks were above the rest of the format by enough that I’m looking forward to seeing how this plays. Mentor Gush decks are the first place I’d look, as they have a couple things going for them:

The deck is basically pre-boarded against other blue decks, and still has an extensive sideboard constructed with Workshops, Oath, and Dredge in mind. It turns out that Workshops is still a great deck, and Dredge and Oath are the two linear decks you need to respect. Arcane Laboratory is my favorite sideboard card against Storm, even in a deck with few Moxes. You could add another Stony Silence if you’d like as well, as that card is a beating for Storm and any Vault-Key deck. Whatever you do, don’t add counterspells against Storm—Defense Grid makes a mockery of those.

As for Modern, I don’t have a deck list I like yet. What I do like is the idea of Tezzeret/Sword of the Meek/Thopter Foundry, and when I say “Tezzeret,” that could be either Agent of Bolas or the Seeker. Sword decks face a lot more disruption than 5 years ago, like Abrupt Decay, Stony Silence, Scavenging Ooze, and Kolaghan’s Command. Still, it’s a cool archetype to explore, and I look forward to doing so.

Ancestral is a little harder to envision as Modern is quite fast, but I’m sure there’s a place for it. I tried sketching out various Mono-Blue Faeries decks, a la Extended 2009, but I didn’t get anywhere satisfactory. The combination of:

Was a format-dominating combo, but the loss of Riptide Laboratory is huge. Serum Visions + Snapcaster is likely better, so this may not be the way to go.

As for Eye of Ugin, good riddance. I supported an Eye ban over Temple because of the possibility of adding 6+ mana in the same turn (with multiple Eldrazi), and because of the overall strangeness of being legendary and a random Demonic Tutor in the late game. With just Temple, Eldrazi is still a real deck—just no longer an unreal one. I guess I can’t complain since I was one of the beneficiaries of their time in Modern.

Earlier this week, Adam Styborksi (a writer for DailyMTG) sent me a bunch of questions about Team ChannelFireball as he’s writing an article on the subject. That made me realize how long the team has been around and how many different people have been on the team. We tested with other teams on and off the last couple of Pro Tours (Face to Face last Pro Tour, by ourselves for Pro Tour Battle for Zendikar), and next Pro Tour we are teaming up with Ultra PRO. It’s been great so far, as the method of preparation lines up exactly with what many of us are looking for. We can no longer leave for 2+ weeks to test on location, so preparing in Denver and communicating online is perfect. That being said, I am in Barcelona and going to Madrid for the week, so we are still getting some amount of the testing house experience. The current team roster is:

The team is a lean (David Ochoa), mean (Paul Cheon), brewing (tie: Josh Utter-Leyton // Matt Nass) machine. I’m more of a ceremonial figurehead, which is good work if you can get it. Either way, I’m excited to see what the future holds for Team ChannelFireball, even if more of its members live in Denver these days.

Set is great, flavor is great, draft is great. Things I’ve done so far in this format:

Ben: It’s so stupid that Tormentor can flip into being unblockable. Why does their bomb rare need to hit me for 4 every turn while also being unkillable?
Me: Ben, can you explain how you’d go about blocking a mist? With your arms? That just wouldn’t work.
Ben: Huh?
Me: Like, imagine you are getting attacked by a cloud of mist. What’s your plan?
Ben: Shut up.

It was a good conversation. I’m pretty sure I won.

For those of you who don’t know Mark Jacobson, he’s a Magic player from Northern California, and he secretly is one of those “that guy” actors. You know, the type that you don’t really know, but shows up in all sorts of movies, or in this case, odd situations. Here are some of the highlights:

For reasons unknown, when Paul Cheon cut Mark’s deck during GP Vancouver, he decided to blow up all his lands. An unconventional path to victory, but not a bad one.

The Probe Heard ‘Round the World

This story is awesome if you’ve never heard it, though it’s been told on MagicTV and my stream. At Grand Prix Seattle last year, which was Legacy, Shahar Shenhar (of back-to-back Worlds titles fame) found himself on a mulligan to 5. He kept a no-land hand with Aether Vial, hoping to scry a land to the top and deploy small white creatures and win the game. He was, of course, playing Death and Taxes, the deck he’d played in the last bunch of Legacy tournaments.

He missed on land, and did nothing turn 1. His opponent, Mark, played a Scalding Tarn and cast Gitaxian Probe. Shahar decided to do what he could to salvage the situation, and since he clearly wasn’t going to win, he conceded to conceal his deck. He deduced that Mark was on RUG Delver, so he sideboarded out Phyrexian Revoker for cards like Sunlance and Rest in Peace.

Unfortunately for Shahar, the following things were true:

The net result was that Shahar drew one of those blank sideboard cards, and lost a close game 2 in what was one of his best matchups.

Gut Shot Through the Heart (or in this case, Chalice) 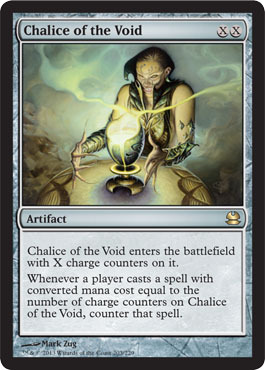 At Pro Tour Oath of the Gatewatch, Mark found himself in a precarious position. He was playing Infect, and his opponent had a Chalice for 1 out. Mark was still a turn away from winning, but unfortunately for him, his opponent had a Gut Shot to kill his Blighted Agent. With the Agent dead, a topdecked Thought-Knot Seer put Mark on too fast a clock, and he ended up losing the match.

Each of these stories is more absurd than anything most people encounter during their Magic career, and to have all them happen to the same person? Luckily for all of us, Mark’s excellent performance at Grand Prix Houston means that he’s heading to the Pro Tour once again, and you will soon find out what kind of insane situation he finds himself in there.

On the Pro Tour

Between going deep on Shadows over Innistrad draft and playing a ton of Standard, I’m hoping for a good Pro Tour. Like I mentioned before, I really like this draft format, and feel like it plays to my strengths (i.e., drawing a lot of cards and doing silly things). Standard I’m less sure about, but the games do have a lot of play, so it should be decent. I forgot my lucky Horsecheon shirt, so I’ll have to rely on my incredible cunning and great skill instead. Uh, on second thought, let’s go with luck.