As usual, a tournament I did not want to attend because of the price of flights turns into success. I should probably start willingly booking too expensive flights because it looks like my brain gets turned on by gambling too much money.

I particularly wouldn’t have minded missing the event because I had spent so much time on Standard lately that I was out of the loop for Modern.

But one of the perks of having a team is that those geniuses spent a bunch of time on this Bant Eldrazi deck over the weeks, and, combined with my efforts, I was confident that it would be a great choice.

We started off with Todd Stevens’ 75 that he played to an 11th place finish in an SCG Open. We liked the idea, so we got him on board for a private chat, along with everyone on our team interested in playing the deck this weekend (plus Sam Pardee, who we knew was on the deck because he had crushed me in a League on Tuesday).

We had an extensive debate over the Tarmogoyf slot—it actually became many things over the weekend from Nest Invader to Spellskite. We eventually settled on at least 2 Spellskite in that slot—it dealt with game 1 issues such as Infect and Bogles, provided another Ancient Stirrings hit, and interacted well with Eldrazi Displacer for an infinite shield.

Then we settled on playing at least a 5th mana dork in Birds of Paradise.

Nest Invader or more Birds didn’t make the cut because our final consensus was that we wanted that slot to be good in the first 1-2 turns but also not a dead draw later. Nest Invader was cool with Gavony Township in the deck, but both of them individually weren’t good enough. Tarmogoyf was not good turn 2.

Ideally, this deck plays a 3-drop on turn 2. You either have Eldrazi Temple in your starting hand, a mana dork on turn 1, or a turn-1 Ancient Stirrings for Eldrazi Temple. For that reason, most of the team ended up playing a ninth 3-drop in the form of Eldrazi Skyspawner.

At one point we even had 4 Eldrazi Skyspawners over all of the Matter Reshaper. We felt that it dealt with one of the deck’s issues—flyers from Infect and Affinity—but we went back to Matter Reshaper as it’s simply a more powerful card and made our mana better.

We instantly added a 4th Cavern of Souls when we tuned the mana base—it was single-handedly the reason why this deck destroyed Jeskai and Grixis decks. Frankly, it also makes those Eldrazi Skyspawner pretty easy to cast if we were to add more.

I registered the 75 above at the Grand Prix. I was only 2-3 cards away from everyone else—they played a Misty Rainforest over the 3rd Brushland, but I was concerned about missing colorless sources.

This was a last-minute addition. I thought we didn’t have enough generic sideboard cards against creatureless combo decks such as Ad Nauseam, Valakut, the Molten Pinnacle, Tron, etc. Eldrazi Mimic was not going to stop them or anything but it could potentially be a faster clock than my usual game plan. The reason the deck doesn’t play them is that it’s too high variance and our deck plays a better late game so we need don’t need to rush. But against these combo decks, Drowner of Hope isn’t a very good game plan. How did I end up with one in my main deck? Well, I wanted a 16-card sideboard. I wasn’t super convinced about the 1-of Eldrazi Skyspawner slot, so I didn’t mind having my 16th sideboard card main deck.

This is the best sideboard card this deck can get. You can find it with Ancient Stirrings and it deals with many matchups that are rough, such as Merfolk and Elves. It also has other applications against Affinity and Zoo. It often comes out of nowhere because people don’t expect a deck that plays so many colorless lands to run that card, but hey, it works!

3 copies could be going overboard, but we wanted to make sure that we covered the Melira matchup as it’s not great. Incidentally, we would make sure not to lose our Dredge matchup if any show up. Again, when this is a good sideboard card, it gets even better alongside Ancient Stirrings.

I’m not exactly convinced of this 1-of—I decided to play it since it’s another generic slot I can swap my Drowner of Hope for when playing against decks that are low on creatures. It’s useful against Lantern as you’ll eventually find it and it can be a huge blowout. Grixis can’t ever kill it, and control decks with Path to Exile give you more lands to work with.

Simply a 5th Path to Exile, this was initially a dedicated slot for the Kiki-Chord matchup but it comes in often against decks like Merfolk and Melira. 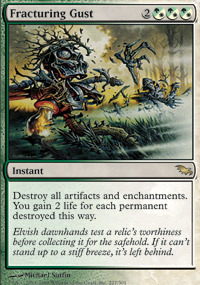 These cards all speak for themselves—the split between Stubborn Denial and Negate is obviously not solved but I believe it is right—drawing too many Denials when you don’t have ferocious is awkward.

I faced a huge variety of decks at the event—mainly a bunch of fair decks that have no chance at beating us. Day 1 I ended up 7-2, losing to Lantern and Burn, and then rattled off 6 wins on Day 2 to make Top 8.

Then I fell to 13-year-old wunderkind Ethan Brown in the semifinals piloting Affinity. That was a matchup that I believe should have been favorable considering all of our sideboard cards, but I didn’t get there and lost a close game 2, ending the match in his favor.