The Azorius guild has long been about maintaining law and order. With powerful generals like Brago, King Eternal and Grand Arbiter, Augustin IV, Commander tables have learned to know and fear this color combination and their dastardly dishing out of dismissive decrees. While we may not be on Ravnica, Azor has made his appearance accompanied by all that the blue and white color combination wish to bring to the table.

Let’s jump right in and table a look at this general’s attributes. 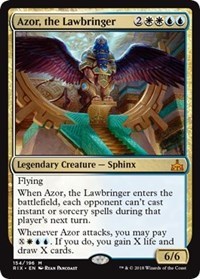 Right off the bat, you see a mana cost identical to a previously printed Azorius general, Isperia Supreme Judge. 2WWUU is a tall order as far as casting costs go, and Isperia was really held back by this very strict mana requirement. The number of colorless utility lands must be managed carefully in this deck. Mana rocks like Coldsteel Heart and Gilded Lotus will provide more use than rocks like Mind Stone or Thran Dynamo because it is crucial to hit your colored mana sources.

A 6 mana cost may relegate this general toward the more casual side of EDH. How competitive the rest of the deck will be is up to you. At 6 mana, it comes down late in the game, and if killed off, it will take a while before you can muster the mana to recast Azor. Keeping that in mind, the deck should contain a sufficient number of cards to bide time and stall the game. Oh gee, I sure hope blue and white have plenty of that.

Now let’s look at those stats. 6/6 flying. No built-in protection is a tough pill to swallow especially for the steep initial mana investment. Though it is capable of taking a nice chunk out of a life total or planeswalker, Azor still requires 4 hits to a single opponent to finish them off with general damage. A 7th point of power would have served him well as a 3-turn finisher.

“When Azor, the Lawbringer enters the battlefield, each opponent can’t cast instant or sorcery spells during that player’s next turn.”

Azor comes equipped with pseudo wrath-protection but only as far as the next turn goes. You won’t have to worry about tapping out for Azor and having someone immediately wipe the board. But he is weak to instant-speed removal since his effect only shuts down spells on the opponent’s respective turn. There is nothing stopping your opponents from dealing with him at instant speed and they will always be allowed to untap before you do. Therefore, pack Dispel, Negate, and Pact of Negation to accompany this general.

The first thing that struck me about this ability was how powerful it was, but how saddened I was to see it only last a single turn. What if I could abuse this ability to ensure it triggered multiple times and each turn with impunity? 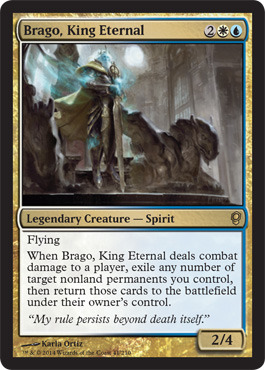 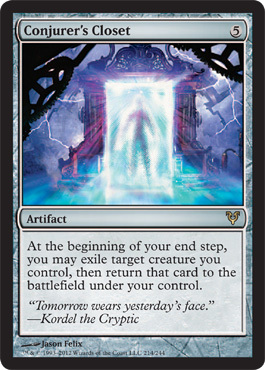 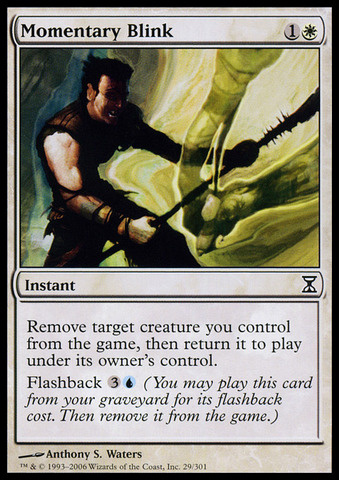 Now you’re cooking with fire! Your opponent never casting a sorcery again may be A Zor subject for them, but that’s what I call a good time. It’s a powerful ability and one that can turn off entire decks. Everything from Rampant Growth to Doomsday is affected by this ability. At the same time, it doesn’t completely end the game (unlike Narset Transcendent’s ultimate) since your opponents can still cast instants to interact on other players’ turns.

In 1v1 Commander, I would love to combine this effect with something like Grand Abolisher or Teferi, Mage of Zhalfir. That would turn off instants at all times, which is extra diabolical.

Lastly, I will take a look at Azor’s second triggered ability. This ability occurs any time Azor attacks and isn’t reliant on connecting with a creature or player.

“Whenever Azor attacks, you may pay XUUW. If you do, you gain X life and draw X cards.”

Look familiar? Sphinx’s Revelation is one of the most powerful and splashy effects in the Azorius color pie. It isn’t an all-star in EDH but that’s because players can usually find a more powerful effect to use that mana on. After all, 40 life is a lot to work with and gaining life in a pinch isn’t as direly needed.

In a deck packed with mana rocks and cheap interaction, I can picture Azor’s second ability being used every other turn. The first time you use it, perhaps tapping out to do so, you draw a bunch of cards and spend your next turn deploying them. Then, after you have created more mana in the form of mana rocks, you can use Azor’s ability to draw more the following turn after. This will eventually bury the table in counterspells, mana, and card advantage to a point where the blue/white player in you is laughing all the way back to Augustin’s courtroom.

Here is a sample deck list for Azor, the Lawbringer.

So, are you excited for this powerful Azorius general? What ideas do you have for a deck list with him? Let me know in the comments and remember—sorceries not permitted!