Standard has been through some crazy ups and downs each week, but from where I’m sitting there’s one deck that has remained a substantial portion of the metagame and continues to win: Atarka Red.

I’m here today to tell you the best and worst ways to beating Atarka Red.

This is easily the best and most reliable way to beat the red menace. It’s so irreplaceable against Red that I would be willing to play it in 2-color decks despite the fact that it’s a converge card primarily intended for 3-or-more-color control decks. Not that there are all that many 2-color decks running around Standard, but it’s just worth knowing that this card is still being underrated despite the fact that whenever I see it played against Atarka Red it almost always decides the game in the caster’s favor.

It’s especially hard to play around because they’re incentivized to play out as many creatures as they can to overwhelm your mana inefficient removal spells, and with the way the red deck is constructed it rarely has the luxury of slow-playing its hand. There is some risk—most of the time you’re forced to tap out to cast it, and they could surprise combo kill you with Monastery Swiftspear, Become Immense, and Temur Battle Rage but that doesn’t come up often enough to deter me from just playing the best card. 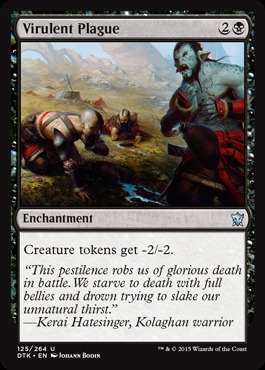 I’ve seen this pop up in sideboards occasionally, and I appreciate the motivation behind playing it, but ultimately it’s too weak. The biggest reason why I think this card stinks is because there’s so much variation and dissent in the red community about how your deck should look after sideboard in matchups where the opponent has access to black mana. One player might have 4 Dragon Fodder and 4 Hordeling Outburst and the next person may have zero of each of those cards. It’s a total guessing game and I don’t generally build my sideboards such that I can be on the wrong end of a guessing game. I do my best to minimize my opponent’s ability to outwit me with the way they construct their deck. Stick to something you know will work and you’ll lose fewer matches.

This is a common sideboard card, but be aware of the fact that it’s common because it’s flexible and can kill Siege Rhino and Mantis Rider as well as Monastery Swiftspear, it is not common because it’s the answer to all your Atarka-Red-related troubles. I like Surge of Righteousness against red, but only in small numbers. If you play all Surge of Righteousness you’ll get beaten badly by the token cards, and if you play all Arashin Cleric you’ll be vulnerable to their combo kill. This is a good card and you should probably be playing exactly 1 or 2 copies in your sideboard but definitely not more. Which brings me to my next anti­-red card… 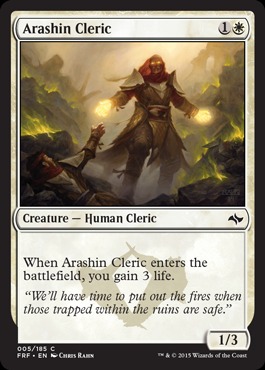 I love Arashin Cleric and I highly recommend it. It’s narrow, but it does the job you want it to do better than any other card. It fights the token cards but can also be useful when they don’t have those cards. It plays well with Ojutai’s and Kolaghan’s Command in Jeskai, and the 3 life buffer makes it so you’re less likely to get burned out while allowing you to take more time to set up a winning position. Typically against red aggro decks you need to kill their creatures immediately before you take combat damage, but with the existence of Temur Battle Rage and Become Immense you can get into a position where they pass priority before damage, you cast a removal spell tapping yourself out, and they combo kill you. In other spots you might just take the damage fearing the combo, and then they play out the rest of their hand which was only creatures, and you lose a game you might otherwise have won playing the matchup conventionally.

Arashin Cleric provides cheap interaction as well as a little breathing room to play more conservatively—exactly what I want from a sideboard card.

I’ve seen this played more and more and I hate it. I realize it has uses outside of the red matchup, but 5 mana is too high a price to pay if you want to be trading resources early. The reason the red deck functions so well is that almost every card costs 1 or 2 mana, so in the games it wins it often casts 6 or 7 spells while the opponent casts 2 or 3. It’s easy to overlook the fact that someone won a game because they simply did way more than the other guy, and you can look at the effect those cards had—they deal damage quickly, and they cost so little they let the red player play more spells more often. Planar Outburst is just too unreliable when matched up against that kind of efficiency.

If I were playing a white-based control deck and I had this card in my sideboard, it’s not even clear that I’d bring it in. What a difference 2 mana makes between Radiant Flames being one of the best sideboard cards out there and Planar Outburst being downright suspect.