Green/white is always a solid combination when Standard is new and the format is midrangy. With Shadows over Innistrad, that won’t change.

Den Protector and Deathmist Raptor have always had incredible synergy—they form the pillars of the GW shell.

Green and white are also the colors of Gideon, Ally of Zendikar and Nissa, Voice of Zendikar, two of the best planeswalkers in the format.

Dromoka’s Command, Silkwrap, and Declaration in Stone are solid removal spells—unfortunately, they don’t deal with planeswalkers, but they are cheap. 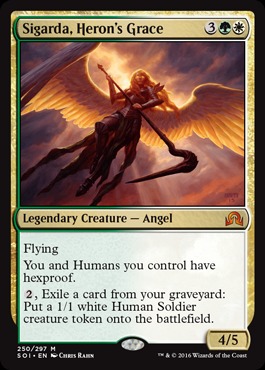 You also have at your disposal two potential 5-drops: Archangel Avacyn and Sigarda, Heron’s Grace can both take over the game. While Sigarda, Heron’s Grace shares both its colors with the deck, I think it’s weaker than Avacyn. Archangel Avacyn lets you attack if the board is stalled, helps you kill planeswalkers, and flies over opponent’s defenses.

There aren’t many Humans to get Sigarda, Heron’s Grace going, and the hexproof ability doesn’t seem relevant enough.

There could be a token theme with multiple copies of Westvale Abbey that uses Secure the Wastes/Hangarback Walker/Nissa/Gideon/Sigarda, but I don’t think this is particularly necessary and I’d rather have a normal variety of good creatures and removal rather than just go for the token plan.

Hangarback Walker used to be great in these kind of decks but I don’t think it’s well positioned in this Standard. There are so many ways to exile creatures (Anguished Unmaking, Silkwrap, Stasis Snare, Declaration in Stone, Descend Upon the Sinful, Kalitas, Traitor of Ghet, Eldrazi Displacer, Flaying Tendrils, Kozilek’s Return, Burn from Within). His main strength is much reduced now.

Not having 2-drops stinks, but there aren’t that many options: 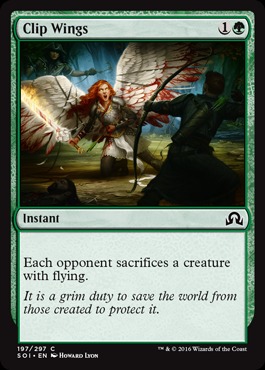 The sideboard is always a rough draft. I know I want Evolutionary Leap for sure since it’s great against slow decks full of removal, and Tireless Tracker could be good in those matchups as well. Clip Wings is a great answer for Esper Dragons and Ojutai, but it’s also effective against Dragonlord Atarka. Hallowed Moonlight is certainly not as necessary as it used to be when Rally the Ancestors was around, but Collected Company is still legal and you might also want to prevent some Necromantic Summons shenanigans. Red decks are always a threat, so the little removal/life gain plan is there as a safety net.

Green/white might not be the best deck in the format, but it’s certainly a good point to start with all this uncertainty.