Asylum Visitor is one of those cards where the primary text actually draws attention away from what makes it good.

In this case, it’s that a 3/1 Vampire with a 1B madness cost is already quite playable. Then you throw in the possibility of drawing cards and you have a winner. Again, the ability is the draw at first glance and it looks like a good one. Who doesn’t want the possibility of a mini-Phyrexian Arena?

Of course, I’ve been led astray by cards like this in the past… 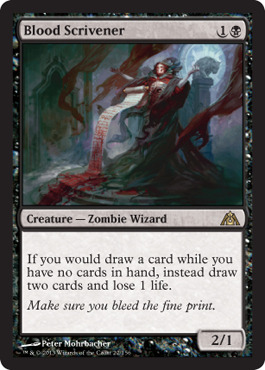 So the important thing I’m looking at is whether the rest of the card is playable. In this case, it has an even more aggressive body than the alternatives and it plays well with one of the main mechanics in Shadows over Innistrad. I suspect a trip to the Asylum is in order if you plan on playing any black in your madness deck. Let’s take a look at what such a deck could look like.

My first build took into account that the current mana in the format is back to being borderline unusable in a normal aggro deck. Picking BW was a concession toward having a good land (Shambling Vent) and gaining access to good sideboard options. It encourages jamming creatures and making use of Indulgent Aristocrat and Fleshbag Marauder with Relentless Dead. Drana’s Emissary may be a cut too low on the power curve to be playable, but it provides another 3-drop Vampire with evasion and can effectively deal 3 damage a turn without buffs.

Vampires are the tribe of choice despite some of the obvious power in cards like Relentless Dead and Diregraf Colossus.

I’m only a Diregraf Ghoul away from a Zombie shell being a very good home for Asylum Visitor as well. In fact the “core” could very well end up being:

Then build around those core cards with madness and sacrifice cards that play nice. Of course, Asylum Visitor is aggressive enough to go into other aggro shells. Here’s an easy update to the build Owen posted the other day.

Asylum Visitor goes perfectly in the deck—you have plenty of ways to take advantage of madness and it gives you another way to recoup some cards besides Tormenting Voice. The biggest drawback of all this synergy is that the mana is wretched and slows down what should be a relatively aggressive deck.

Going back to the core of the sacrifice effect deck though, Diregraf Colossus is one of the most powerful new cards spoiled if you get enough Zombies to abuse it. It can come in as a large threat later in the game, is a great card to buy back via Relentless Dead, and can generate an army even if it’s unable to attack.

Let’s break it down:

Diregraf Colossus enters the battlefield with a +1/+1 counter on it for each Zombie card in your graveyard.

So as a 3-mana card, this means that if you have even 2 Zombies in your graveyard when it enters the battlefield, you’ll be getting an above-rate 4/4. Later in the game, this could easily be an 8/8 or bigger as soon as it enters the battlefield, creating a must-kill threat. Of course, playing it on curve as a 2/2 isn’t what you want to have to do, but sometimes sacrifices must be made…

Whenever you cast a Zombie spell, put a 2/2 black Zombie creature token onto the battlefield tapped.

Somebody decided to push this card. Colossus being a conditional 2/2 probably would be borderline to see play and left to only the most dedicated Zombie decks. Instead, you get a big payoff for playing him on-curve without the benefits if you can follow up with more Zombies. Getting a free 2/2 attached to every future Zombie can get out of hand quite quickly. 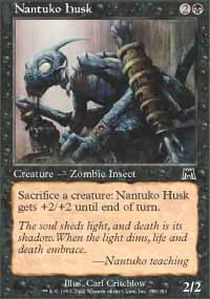 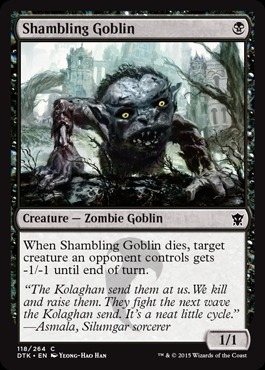 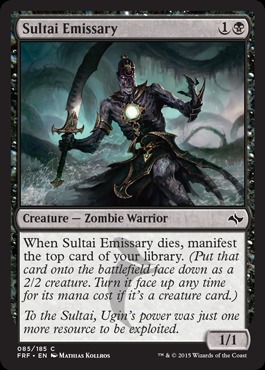 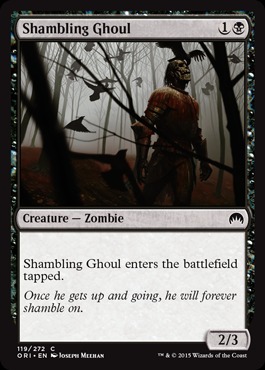 The only problem with the Colossus is the support it currently has, which I’m hoping the rest of the Shadows over Innistrad cards will help rectify. Right now, Relentless Dead, and possibly Nantuko Husk, are the only slam-dunk shambling menaces after rotation. Otherwise, you’re looking at cards like Shambling Goblin, Sultai Emissary, and Shambling Ghoul to make up your early curve and none of the late-game Zombies look all too pleasing. Back when Zombies were viable, you had Diregraf Ghoul and Gravecrawler to anchor it, but right now you only seem to have the Geralf’s Messenger side of the equation.

Hopefully, there will be some more exciting Zombies to go alongside our Vampire brethren to get all the classic horror tropes back to play!