When I first started playing what can loosely be described as “competitive” Magic, back in 2012, exalted had just returned as a mechanic in the most recent core set, M13. At the time, I was baffled as to why people weren’t playing exalted decks at the highest level of competition–after all, they wouldn’t include a mechanic in a set if it weren’t meant to be a guiding aspect of the competitive format, right?

I couldn’t figure out why my Knight of Glory/Knight of Infamy deck wasn’t crushing my FNM–I even had a playset of the promo Cathedral of War! But I learned an important lesson: just because it exists, doesn’t mean it’s good. This is a useful lesson that can be broadly applied to many things outside of Magic: case in point, pumpkin soup.

So I was quite surprised to find that the signature mechanic of War of the Spark, amass, could actually generate a deck that really held its own on the battlefield. Astute viewer Brady submitted a list featuring all the best amass cards, and with a bit of good old-fashioned Arena Boys tweaking, we ended up with a deck that was surprisingly powerful and resilient!

The core of the deck is simply the very best cards that the amass mechanic has to offer. The headliners are the various rares, including constructed staples Enter the God-Eternals and Dreadhorde Invasion. Both are just generically powerful options to include in a Standard deck and don’t raise too many eyebrows, but the real haymaker in this list is, of course, Widespread Brutality. 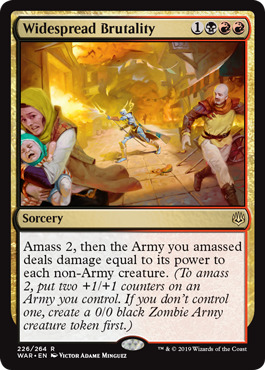 One-sided sweepers usually cost in excess of eight or nine mana (Plague Wind territory) and so playing a four-mana sweeper that actually adds to your board? This is Magical Christmasland-type stuff, but with Widespread Brutality it’s not a difficult feat to pull off.

To do so, you need early action that builds up your Army. Lazotep Reaver and Gleaming Overseer support Dreadhorde Invasion in doing this, while interactive options such as Lazotep Plating are both proactive and reactive at the same time. Angrath and Commence the Endgame are excellent value-oriented cards, while one-ofs Eternal Skylord and Invade the City can close out the game quickly should it go long.

Outside of the amass cards themselves, there are a few slots left over for more generically “good” cards. Moment of Craving is proven asset in aggressive matchups, while Narset is a Constructed powerhouse and still does good work in a relatively creature-light deck like this. Soul Diviner was a late inclusion that overperformed; having another card that does work against both control and aggro is invaluable. Finally, Nicol Bolas is of course both obscenely powerful and a lot of fun, and it’s difficult not to play him in a Grixis deck like this.

One of the most surprising things about this deck that we discovered was just how good it is against slower, controlling decks. We were able to go toe-to-toe with Teferi decks all day long, grinding them out quite effectively due to the composition of our suite of threats and answers. Dreadhorde Invasion is the gold standard, of course, but Gleaming Overseer is a lightning-rod for their removal and protects your Army extremely effectively. Even innocuous cards like Lazotep Reaver ended up demanding real answers–many threats in this list (Angrath, for example), will stretch your opponent’s removal suite and force them to dispatch multiple answers.

With plenty of two-drops, it’s not difficult to get on the board early. This is important in most matchups, but particularly against other aggro decks. Lazotep Reaver and Gleaming Overseer can play excellent defense, and Dreadhorde Invasion is, oddly enough, an incredible way to avoid getting burnt out if you can survive into the mid-to-lategame.

Widespread Brutality is your get-out-of-jail-free card in most matchups. Against creature-focused aggro and midrange strategies, a one-sided sweeper is very difficult to recover from, and it’s never just a four-mana Pyroclasm, as the 2/2 it leaves behind is very useful. Against creature-light decks, it’s a four-mana 2/2, and don’t be afraid to deploy it as such.

Egg management is critical in this deck, in that you need to be very careful about how many of them you put into a single basket. For example, Angrath’s ability either says “create a 2/2” or “put two +1/+1 counters on a creature.” It’s absolutely essential you evaluate the strength of dynamic abilities like these on a case-by-case basis.

Imagine you already have a 2/2 Army, and an Angrath. Do you activate the ability? This is enormously dependent on the game state, your board position, and what you think is in your opponent’s hand. If they have removal, you want to bait it out on the 2/2 by forcing them to use it, then activate Angrath to get back on the board. If you’re at risk of falling behind on the battlefield, having a 4/4 will get you a lot further.

This isn’t the sort of thing you can give simple, concise guidance on as there are far too many variables to cover. The point is this: remember that amass is essentially a modal ability where you don’t get to choose the modes, and play accordingly.

We’ve got some real winners and losers this week. Based on how the deck played, it’s clear some cards aren’t pulling enough weight and will have to get the chop. But this is quite exciting, as it means we haven’t yet found the best version of this list. As the deck seems pretty powerful already, it’ll be very interesting to see just how good it can from here!

Out come both Invade the City and Eternal Skylord. They’re designed to be high-impact finishers (growing a massive Army or sending one into the air, respectively), but the deck just doesn’t need them. It can grind like Rodney Mullen, so there’s no need for quick and easy “I win” buttons that clog up deck slots.

Instead, we augment the number of high-quality utility cards in the deck. Soul Diviner is a great body against early aggressive creatures, while Narset is, well… Narset. Lazotep Plating is a great “gotcha” card but isn’t always live, so we can do better. Specifically, with an extra copy of Moment of Craving, which helps us in potentially tricky aggro matchups.

We also find room for an extra Widespread Brutality, a card with a ridiculously high ceiling, and shave an Angrath to make room at the four-drop slot. Finally, Karn’s Bastion hits the bench for the boring but sensible basic Swamp–usually, Karn’s Bastion reads “4: put a +1/+1 counter on target Army,” which isn’t that great. I’d rather be guaranteed to cast Nicol Bolas on time.

That’s it for this week! Don’t forget you can submit lists you’d like us to play – the best place to do this is on Twitter: @thearenaboys. See you next time for more silliness!