More than any other factor when determining a planeswalker’s playability, mana cost ends up being the most relevant. Sure, we’ve seen enormously powerful five and six-drop planeswalkers like Teferi, Hero of Dominaria and Elspeth, Sun’s Champion, but whenever a planeswalker with a converted mana cost of three or fewer is printed, it’s time to sit up and take notice.

The overwhelming majority of three-drop planeswalkers have seen solid competitive play. Whether it’s Domri Rade and Ashiok, Nightmare Weaver in Standard, Liliana of the Veil and Teferi, Time Raveler in Modern, or Dack Fayden and Narset, Parter of Veils in Vintage, the cost of a planeswalker is, broadly speaking, the biggest factor in determining its playability (Tibalt notwithstanding). Just look at Wrenn and Six in Modern, a card that is only becoming more and more popular as Jund puts itself back on the map!

While every single three-drop planeswalker isn’t going to make it–sorry, Jace, Cunning Castaway–it’s never a mistake to stress-test a cheap planeswalker’s playability, given their pedigree. One of the most recent additions to this subcategory of cards is Mu Yanling, Sky Dancer, and already she’s starting to see some play in the post-M20 experimentation. 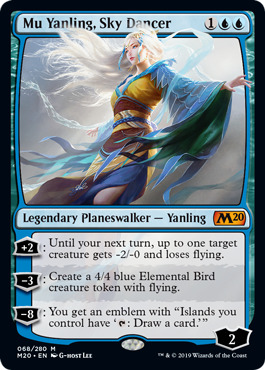 Mu Yanling is a weird one right off the bat as, in contravention of recent design trends, she enters the battlefield with very low loyalty. Typically, in the past, a key metric of a planeswalker’s playability has been its capacity to protect itself, and in recent years this has been achieved with high starting loyalty rather than an ability that creates or removes a creature. Mu Yanling, on the other hand, comes in with just two loyalty and only ticks up to four.

This has an interesting effect on her immediate options in that you can’t immediately activate her second ability. There aren’t many planeswalkers with this caveat. However, given that she comes down so early and given that her +2 does a good job of keeping her alive, it’s not too difficult to keep her around long enough to make a 4/4 flier. For which, don’t forget, you only paid three mana, an excellent deal in anyone’s language.

On the face of it, then, Mu Yanling offers a sufficiently powerful package for us to be interested in playing her, as a three-mana 4/4 flier that will sometimes continue to be backed up by a planeswalker is definitely worth playing. Additionally, this is overlooking her ultimate ability, which like any good ultimate, should end the game in short order. Already, people have been cracking skulls with Mu Yanling, in decks old and new alike!

Personally, I’m not a fan of this archetype, and was glad to see its fortunes wane in recent weeks. Mono-Blue Tempo preys on the kinds of decks I like to play with its aggressive, disruptive play patterns, and it might be back on the menu after a few key upgrades from Core Set 2020. Not only is Mu Yanling out and about, but Spectral Sailor is the latest one-drop to join the fold.

Spectral Sailor is the final deathknell for Mist-Cloaked Herald, as an evasive threat with huge lategame utility. It’s so good, in fact, that lleaf33 chose the fourth Sailor over the fourth Pteramander–Mono-Blue will greedily accept any and all sources of card advantage like this one. Spectral Sailor also plays very nicely with the instant-speed nature of much of this deck, pairing excellently with fellow one-drops Spell Pierce and Opt.

What of Mu Yanling, however? Obviously the premium three-drop in this deck is Tempest Djinn, which is a high bar to clear for any newcomer. Mu Yanling, however, is nonetheless a truly excellent fit in a deck that has early plays to protect her, and an abundance of flying threats that benefit from her ability to ground opposing fliers.

In this deck, it’s not necessarily all about the 4/4 Mu Yanling can create. Helping to ensure you can connect your flier that has been suited and booted with a Curious Obsession is critical in keeping Mono-Blue in the game, and her +2 does not only this but also protects her from retribution.

Mono-Blue is a surprisingly flexible deck, and so the addition of Mu Yanling as a flexible threat/utility card is very appropriate indeed. The fact that you’ve got 20 basic Islands to go with her ability isn’t too bad, either!

I was so, so confused when I first saw this list. Spectral Sailor and Brineborn Cutthroat; are we playing Simic Pirates? No, no, Frilled Mystic and Merfolk Trickster are both Wizards. But wait–Nightpack Ambusher? There are no other Wolves to buff, what is this deck?

Rather than any kind of creature tribal deck, this is, in fact, flash tribal! Every single card in the starting 60 (with one notable exception) can be cast at instant-speed, and many of them reward you for playing most of your Magic during your opponent’s turn. It’s beautiful!

Green and blue don’t typically offer the best interactive options (when it comes to resolved threats, at the least), so it’s good to see a deck like this filled with ways to disrupt opposing gameplans. Fourteen maindeck counterspells are paired with creature interaction like Unsummon and Merfolk Trickster to bolster the traditional weaknesses of these colors. Then there’s the suite of threats–Brineborn Cutthroat will grow very big very quickly in this deck, and it won’t be difficult to churn out 3/3s with Nightpack Ambusher!

It speaks to the potential of Mu Yanling that it’s the only maindeck card that can’t be cast at instant speed. However, Martin Juza’s recent in-depth analysis of the deck included a justification as to why Mu Yanling isn’t a good fit for Simic Flash–the otherwise totally instant-speed main deck suffers for having a sorcery-speed planeswalker in it.

I’ll defer to his opinion. I don’t like arguments at the best of times, and especially not with the likes of MPL superstar and Hall of Famer Martin Juza. All the same, when playing with this deck, it’s worth keeping in mind the value of a card like Mu Yanling. Playing Opt and Negate instead is in concert with the overall thrust of the deck, but if you’re looking to beef up on cards that offer both flexibility and power rather than simple utility, Mu Yanling should remain on your list of possibilities.

Before we wrap up for today, I wanted to refer to the list I suggested as a starting point for a tribal Spirits deck post-M20, and suggest including an experimental Mu Yanling or three in there. I’ve been impressed with Spirits so far, especially after cutting interaction for more brute-force power with Favorable Winds, and Mu Yanling might be the next piece of the puzzle.

This deck has all the necessary pieces for Mu Yanling to do her best work–early plays to keep her alive, buffs to the 4/4 she creates, and of course an ability to clear big flying blockers out of the way to enable big swings with your team! Curving a Mu Yanling into a Dungeon Geists, for example, is a nice swingy play against opposing creature decks, and will help you pull ahead into the mid-to-lategame.

That’s it for this week. If you have questions or comments about this article or these lists, don’t hesitate to get in touch with me on Twitter: @rileyquarytower!