Guilds of Ravnica Limited is almost at an end, and soon we’ll welcome Ravnica Allegiance to the draft table. I love the fact that we will be drafting the new set by itself, but this also means the end of drafting Guilds of Ravnica cards.

I’m not a fan of drafting guilds, because they limit your Draft combinations to just five, but I enjoyed Guilds of Ravnica and some of its mechanics. Both surveil and jump-start are great ways to avoid flooding, much like kicker and monstrosity. I appreciate when my extra lands are actually useful and I don’t die with a bunch of extra lands in play.

Those who watched my stream last weekend know some of my takes on Guilds of Ravnica Limited, but I’ll go over them today as the format’s swan song.

Sealed is a much different animal than Draft in this set. While Boros is great in Draft, it’s usually not available in Sealed and Dimir is by far the best archetype. Disinformation Campaign is one of the best cards in the entire set, and as soon as I saw it in my MOCS Open pool I decided to dive right in, despite some other strong cards—March of the Multitudes and Venerated Loxodon—pushing for me to go in a different direction.

The deck wasn’t broken. I had many better pools in my Guilds of Ravnica Sealed career, but the three Watcher in the Mist and Deadly Visit made sure that I would never flood out, and I played many white decks that couldn’t fight the card advantage game, not even with a turn-2 Dawn of Hope.

Not a single opponent chose to draw against me, and that really surprised me. This format is grindy and you want to draw first basically every time, especially with a deck like mine with two Dead Weight and Burglar Rat. I chose to draw even against Boros.

I went 8-1, losing to Izzet Aggro. It caught me off-guard with two copies of Maniacal Rage and Gravity Punch to win a game I was sure I was going to win. Guilds of Ravnica reminded me that in order to practice for a Limited GP you cannot Draft exclusively, since Sealed is a totally different format. You need to get some games under your belt every single time. So keep that in mind if you plan on attending GP Prague or any other Limited GP. Hop on those Sealed queues as soon as possible.

Last year I managed to place second in the race for Draft Master, and I’m very proud of my achievement, because I used a different approach than most Pros would tell you to. Going into PT Rivals of Ixalan I knew that B/W Vampires was the best archetype and the deepest. I dove right into it two times and got a sweet 6-0. At PT Dominaria, when most people were hyped about Saprolings and Wizards, my team and I were more on the unicorn plan, drafting white aggro with Equipment and flyers. Forcing is not as bad as people tell you it is, especially in a big event such as a Pro Tour, where you want to make high-risk, high-reward plays.

What happened in Guilds of Ravnica? What did I try to force?

Guilds of Ravnica was slightly different. In the beginning and for a very long time I was on the “force Boros” plan, and I learned the ins and outs of it well. I had my periods where I loved Golgari, Selesnya, and Dimir.

One thing was certain during these months of Guilds of Ravnica: I hated Izzet. 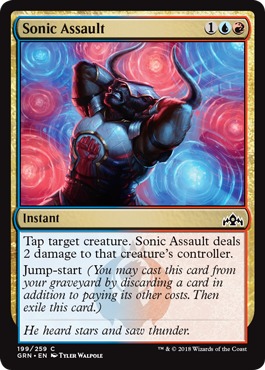 Izzet just didn’t make sense. Sonic Assault is such a situational card and the same can be said for Piston-Fist Cyclops. It’s an archetype that wants to be either aggressive or control but in my opinion fails to be either. Boros is the superior aggro archetype because of mentor, and that’s why both Selesnya and Izzet fail at being good at aggro—they lack mentor creatures. They might have access to some of them, but it wasn’t enough.

Izzet Control had the same problem. It tried to control the game, but lacked card advantage plays, like the strength of Dimir in surveiling extra lands in the graveyard. Jump-start can mitigate that, but the problem is that the jump-start commons, other than Direct Current, are all aggressive cards and you don’t want to be playing Maximize Velocity, Altitude, or Sonic Assault in your Wishcoin Crab deck.

I got into drafting Selesnya aggro for a while, but then gave it up. The archetype was just super weak, and even with plenty of rares it was weaker than a Boros filled with good commons. Selesnya Convoke didn’t feel good either, being clunky and underpowered.

Unlike everyone else, I was always kind of high on Golgari, after watching Gabriel Nassif win with it in the early days of the format and especially after my teammate Jason Chung broke it, telling us to play 3-4 spells and tons and tons creatures that could go straight to the graveyard like Portcullis Vine, Plaguecrafter, and Pilfering Imp. The archetype was solid and people actively avoided it, which let you pick up all the Golgari gold cards late.

This unfortunately did not happen at the MOCS Open Top 8, where after a first pick Lava Coil and a second pick Nightveil Sprite I read the Draft correctly and moved into Golgari. I wheeled Glowspore Shaman in the first pack, and Ochran Assassin in the third one. The problem was that I only saw one Rhizome Lurcher, which was the key to this undergrowth archetype, and my deck lacked power. I wasn’t particularly happy with it, but I had to try my best to 3-0 and qualify for the MOCS Championship.

After a relatively easy win against Dimir in the first round, I faced Jaberwocki (Logan Nettles) in the semis. He’s an online superstar who recently started doing well at real life events too. I lost 0-2, but weirdly enough I felt like both games were in my favor and that I was winning them. That’s not a feeling that happens a lot to me. I tend to not be driven by emotions, but in both games I got exploded for 4 and from there it was all downhill.

Making Top 4 of the MOCS Open is a huge accomplishment for me because I’ve never done well in a large online event before. This is a big boost to my confidence as I’m looking to play more and more high stake events in 2019 with Arena.

A big part of my success is because of my Twitch chat. As you might know, I streamed the whole MOCS Open, without delay in the Swiss portion and with a 10-minute delay in the Draft portion. The highlight was me forgetting to turn on the microphone after going to the restroom and being reminded 10 minutes later on by the chat.

I think I usually play pretty poorly on MTGO because I tend to be less focused, but yesterday I wanted to put on my best show. My Twitch chat motivated me well and I succeeded as a result!

2019 is just about to begin and it will be a great year for me and the other Magic Pro League players. The stream will be a challenge and I can’t wait to embrace it!