As I write this article, Ultimate Masters has been out on MTGO for a week or so and I’ve had the chance to do a little over 20 Drafts, earning 8 trophies in the process. I was also able to get a bit of help from Tim Aten, who currently sits at the top of the trophy leaderboard with 26 wins (and from of course all of Twitch chat).

I’ll try to cover every archetype I’ve drafted or come across to give you as much info as possible for those of you who are planning on attending one of the UMA Grand Prix but don’t have time to play a million Drafts beforehand. You can pretty much draft any color combo, and draft some of them in different ways, so I won’t be able to go into detail about every archetype. I’ll also be sharing pictures of decks that did well for each color combo so you can get a feel for what a good deck looks like in UMA.

Blue-red has always been spell-centric based on my experience and is a low-risk, high-reward archetype. You can have a very good deck without getting a single good uncommon, and unlike a card like Wild Mongrel that most green decks will gladly play, you rely a lot on Thermo-Alchemist, a common that other color combos shouldn’t fight you for, except maybe red-black. Fire // Ice is another great common that you should get fairly late if you’re the only Izzet drafter at your table.

I would rank the premium commons, in order: 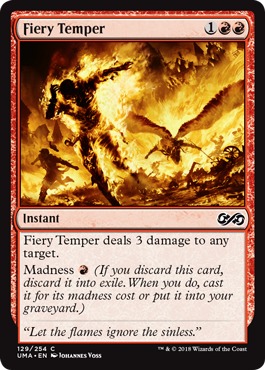 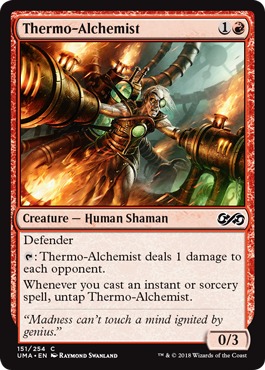 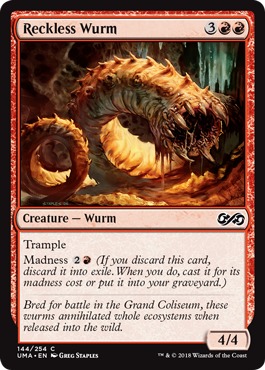 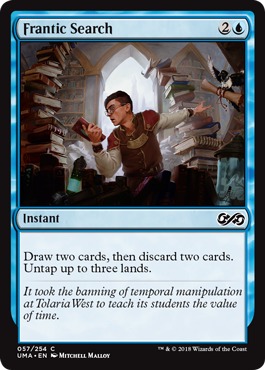 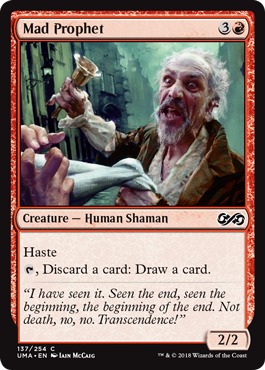 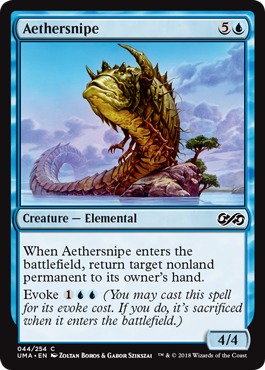 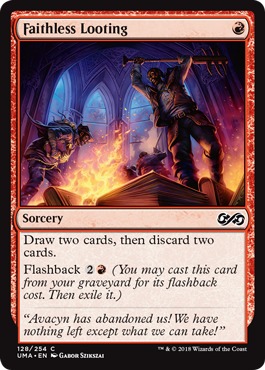 As with all pick orders, it will vary based on what you already have and your read of the table (you might be able to wheel a card like Thermo-Alchemist but not a Frantic Search). You’ll usually also be happy with exactly one Treasure Cruise.

I like to make sure that I have one or two Just the Wind, as Umbras and large creatures can be a problem. If you can’t get your hands on one, make sure you pick a Turn to Mist or two for your sideboard.

The two best uncommons are probably Young Pyromancer and Blast of Genius even though you’ll take as many as you can get of the first and probably only want a couple of the second (gets better with Treasure Cruise). Murderous Redcap, Anger, and Firewing Phoenix are also very good, probably right around Fiery Temper’s level of power.

Here is a fairly busted version of the deck:

I’ve drafted U/W a couple of times but haven’t had the most impressive decks. It seems like this archetype relies on uncommons more than most. You usually want to be some kind of midrange/control deck with a reanimate element to it and possibly some Auras synergy. Reviving Vapors is a much higher pick here than in most formats, and cards like Ancestor’s Chosen and Iridescent Drake go way up in value.

You can also end up heavy white with a heroic theme and splash a few blue cards. This is true for most W/x combos. 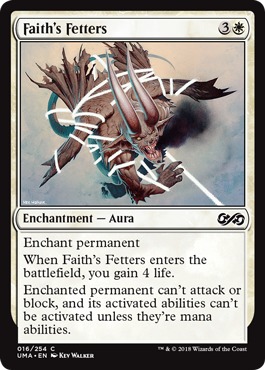 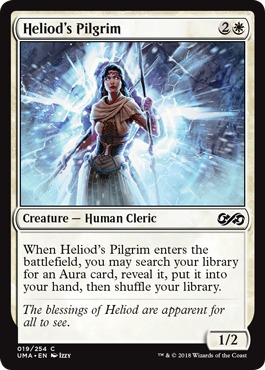 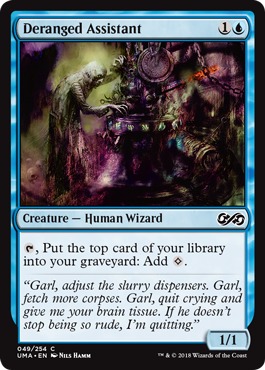 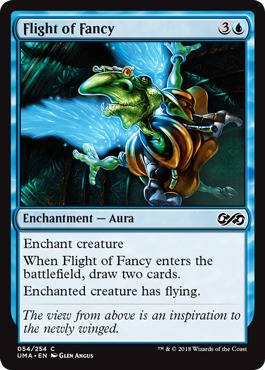 I didn’t have a good picture of a deck, so here is a sweet blue-white list I drafted (and played to a 2-1 record) after first-picking Eldrazi Conscription:

I haven’t been able to draft a crazy 4+ Mongrel/4+ Rootwalla green deck in this format yet, and my good G/W decks have been based around heroic.

Hopefully, you won’t have to firstpick anything worse than a Wild Mongrel or a Faith’s Fetters. I think the pick order for this archetype will vary a lot on what you have.

Cards you will (almost) never be unhappy to play, in order: 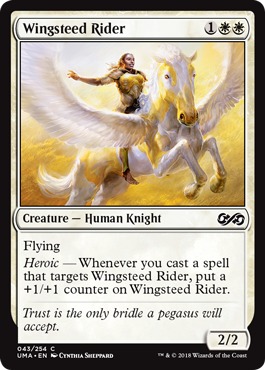 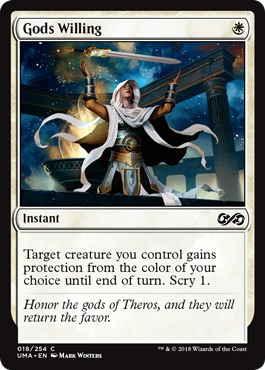 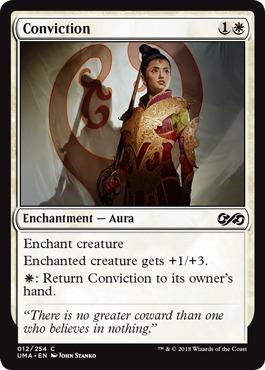 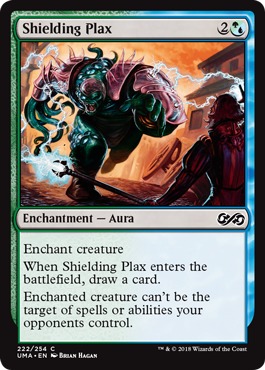 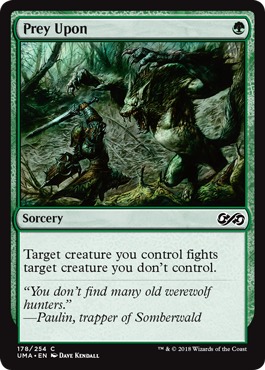 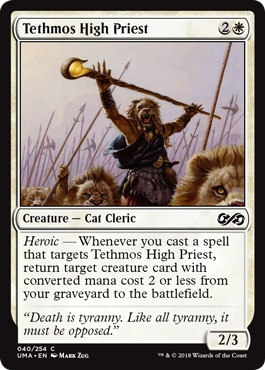 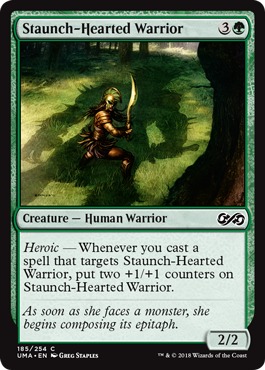 Decent fillers (hopefully you don’t have to play more than 3 or 4 of these total): Scuzzback Marauders, Lotus-Eye Mystics, Safehold Elite, Satyr Wayfinder, Ronom Unicorn, Basking Rootwalla, Repel the Darkness (can go way up in value if you have a lot of heroic creatures but few ways to trigger them).

The only two uncommons I would clearly rank above Faith’s Fetters are Travel Preparations and Phalanx Leader. I think Slippery Bogle is a trap unless you get your hands on a Daybreak Coronet.

I’m also not a big fan of most of the Umbras except for Snake Umbra as there are a decent number of bounce spells in blue, as well as cards like Turn to Mist and Wickerbough Elder at common, and I would prioritize Conviction and Shielding Plax over the Umbras. Speaking of Shielding Plax, its wording makes a good anti-heroic card as you can play it on your opponent’s creature and they won’t be able to target it with their spells.

I’ve only drafted R/B once, and it feels like a worse version of blue-red. I wouldn’t really look to draft it, but your deck should still be good if the colors are wide open. Olivia’s Dragoon will be your “standard” 2-drop, and Thermo-Alchemist can be decent as well, especially if an 0/3 lines up well against your opponent’s threats. I had two Garna, the Bloodflame the one time I drafted R/B. They were extremely good and combo’d especially well with Cathodion.

I’ve drafted the deck once, and didn’t do well despite having Liliana of the Veil and All is Dust, but I’ve heard good things about blue-black and here is one of Tim’s trophy lists:

I don’t have any W/R Drafts under my belt, but this is definitely an aggro color combo. The best version of the deck probably relies on Akroan Crusader, Arena Athlete, and Reckless Charge, possibly with Raid Bombardment to finish your opponent off, as well as the good white heroic cards. Rally the Peasants is in the set at uncommon, a card you should easily get your hands on if it’s ever opened. The same should be true for Warleader’s Helix as it is somewhat hard to splash in the format since there is very little fixing.

Tim hasn’t been a fan of the color combo either, and when I asked him what he thought were the best and the worst color combos, here is what he had to say:

”The top two are U/R and B/G/x, and bottom are just any brainless aggro decks where you’re reliant on your draw steps. With all this looting and fixing and such, there’s no reason to go Boros.”

The only color combo I haven’t drafted. Your big payoff gold uncommons are Angel of Despair and Unburial Rites. I’m a bit worried that W/B will suffer more than most if you can get your hands on quality uncommons. Speaking of Unburial Rites, reanimator decks are a real option in this format and those will usually be 3 colors, with green as a base or sometimes R/W/B with Faithless Looting. You might want to prioritize Terramorphic Expanse fairly high and Vessel of Endless Rest is also a reasonable card to include in your 3-color decks. I’ve actually been picking Expanse very high, period, as you usually end up with enough playables, there are no non-rare dual lands, and the set has quite a few 3- and/or 4-mana cards with double-colored mana in their casting cost.

I’m guessing W/B wasn’t Tim’s most drafted archetype either, but he managed to put this one together for a trophy:

R/G is probably best drafted as aggro. It was actually the combination I played in my very first UMA Draft and I’ve drafted it once since, but I wasn’t impressed either time. I’m worried that the deck might be too dependent on getting multiple Wild Mongrel, and they don’t come easily. Both times I drafted R/G, I couldn’t get my hands on more than one or two despite first picking one the second time. To contrast this small sample size, I’ve also had a couple of Drafts where I wasn’t green and I ended up passing five or six Mongrels.

Here is my first UMA Draft deck that I went a respectable 2-1 with:

While G/W and G/R are on the aggro side, I think G/B and G/U will mostly want to rely on Kodama’s Reach and splash for a color or two, sometimes with a reanimate element. Of course, Wild Mongrel will be a serviceable 2-drop in these decks as well, and you can maybe end up with an aggro version of the deck if you have infinite Mongrels and Rootwallas, but you should draft these color combos keeping in mind that you’ll want to be some kind of midrange deck. You can also end up with a W/G/x midrange deck but probably not as often (and even less often R/G based).

My favorite deck I drafted in UMA was G/B based. I had four Kodama’s Reach, pretty much every card in my deck was a 2-for-1 (Moan, Spider, Scuzzback, Death Denied) except for Last Gasp and Wild Mongrel. I splashed for Urban Evolution and Wall of Reverence, a card a lot of decks can’t really beat.

Here are a couple of Tim’s 3/4c green decks:

While there might be more, here are two I came across that seem quite strong.

As its names indicates, the deck is based around Raid Bombardment. I haven’t tried it myself but it should be fairly easy to put together as it makes good use of a lot of the commons no one really wants. I’m not sure it’s strong enough that you should actively look to draft it or if it should be a backup plan in case your R/X Draft train wrecks, but I was impressed the one time I played against it.

I’m 0-2 against dedicated Laboratory Maniac decks. I felt particularly helpless against the second version I played against. My opponent used Satyr Wayfinder and Forbidden Alchemy to cycle through his deck, stayed alive by casting Archaeomancer and Pulse of Murasa over and over again, clogged the board with cards like Hooting Mandrills, and made sure his win condition was safe with a few card drawing spells (for the “instant” kill), counterspells, and pump spells. Granted, I had a mediocre red-green deck but my opponent’s deck looked very good.

Of course, I’m working with a small sample size here and even though I had Tim’s insight to help me write this article, there might be some bias towards a color or another, so feel free to share any disagreement you might have or share your experience playing UMA, especially if you feel like you’ve gotten a good grip on a specific archetype.

If you haven’t had the chance to give the format a try, it’s lots of fun and I’ve been enjoying playing UMA, despite the fact that I won’t be competing at either Prague nor Vancouver. I hope this deck article helps those who do and that they manage to make it past the Sealed portion.