When I arrived in Richmond, I was 100% locked on playing Oko. I believe the synergy around all the Food cards makes it the best deck in the format by a significant margin and no deck actually has a good matchup against it. Sure, every now and then something new shows up and people are not prepared for it, but Food has the tools to beat everything.

Our team had two different versions, Simic and Sultai. This is what the Sultai deck, played by Siggy, Sam Pardee, Ben Weitz, BK and Matt Nass looked like

This deck pretty much has 56 cards locked in and then there are 4 flex spots. People usually play some combination of Vraska, Golgari Queen, Liliana, Dreadhorde General, Ugin, Casualties of War or Massacre Girl in this spot, but we didn’t really like any of the options, so the first thing we did was add one or two lands. Then someone came up with the idea of playing Fae of Wishes and it actually sounded pretty good. It’s a bit slower, but it gives you a nice toolbox to work with, including the previously mentioned cards and additional options like The Elderspell. Even against aggro, the 1/4 flying body actually does a decent job of blocking.

The other version we liked was straight Simic that also had about 56 cards locked with some flex spots left to figure out. Mass Manipulation looked really strong for the mirror, especially against Sultai. It’s a little worse against Simic, because they have a lot of ways to bounce their stuff back, but games go long and if you cast it for more then 1, it’s usually game over. The only problem is Veil of Summer, which can be quite a blowout.

I decided I wanted to play straight Simic myself, but the version I liked the most was the one Shota Yasooka used to win his MPL split a week before the event. It’s more aggressive with Brazen Borrowers, Questing Beasts and even Mobilized Districts for extra attacking power. This is what my list looked like

I believe this version is better against a field with decks like Jeskai Fires, various Cat-Oven decks or Embercleave decks. I expected Food to be around 45-50% of the metagame and the rest to try to outsmart them by playing these decks that they thought would beat Oko.

I was wrong for two reasons. First, in reality those decks don’t actually have a positive matchup against Oko and people figured that out and second, Food was actually 70% of the field. That’s something that never happened before. Even Energy decks and Hogaak were only about 40% and people already thought that number was crazy.

I played against 7 mirrors, going 4-3, and against 3 non-Oko decks, going 2-1. Outside of some of the games where one player has the Goose-Oko-Wolf-Nissa-Hydroid draw, most of the gameplay is actually fairly interesting and skill-intensive. I believe that the in-game decisions and mulliganing are where you can get an edge.

For example, during our testing, the following situation came up: Siggy played turn 1 Gilded Goose into turn 2 Oko. Ben Weitz had a Goose into Noxious Grasp for Oko. Siggy untaps on turn 3, plays a land and this is what the board looks like

A few of us who were watching and discussing the game thought the best play was to play Wicked Wolf here, killing Ben’s Gilded Goose. In my opinion this play is pretty bad–even though the usual consensus is “always kill the bird” when given the option, you are effectively “killing” your own Goose here as well because you need to sacrifice your food to make this play.

This means that the next two turns can go like this:

Given our hand on turn 3, I think the better play is to just play a land and pass the turn. If Ben plays Oko or another mana creature, we make food at the end of turn, untap and play Nissa and attack Oko down to 3 with a lot of mana for Hydroid Krasis next turn. This is a very favorable position. If we pass and Ben has a Wicked Wolf on his own to fight our Goose, he has to sacrifice his only Food token to pay for it, and we make a second Food token in response and untap into a fourth land and Wicked Wolf on Ben’s Wolf, still with one Food left to protect it later. Ben is down to 3 lands in play, while we have 4 and we still have the guarantee of being the first to cast Nissa next turn.

Situations like that is where you can get your edge in these mirrors, and it doesn’t matter much if you are playing Sultai or Simic. Both have their advantages and disadvantages and it’s not like you are playing bad cards in your deck–they all just get better or worse at different moments.

Another way to get an edge is mulligan decisions. Consider the following hand in the mirror: 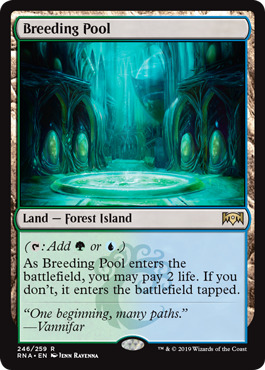 I would mulligan this hand both on the play and on the draw. You have way too many expensive cards, not enough lands and no planeswalkers, which is what really decides the mirror matches. Hydroid Krasis isn’t even usually a card you want to see in your opening hand. I’m always looking for a Gilded Goose or Paradise Druid, or at least a Once Upon a time, enough lands and ideally a planeswalker.

Obviously not every hand you start with can have a turn 2 Oko or turn 3 Nissa, but even a hand of 4 lands, Gilded Goose, Paradise Druid, Wicked Wolf is something I’d rather keep because I know I will be able to make all my land drops, have some interaction and that I’ll be able to play any action I draw a turn or two ahead of curve.

Basically, my best advice is to play a lot, find all the important play patterns and what is important and once you know that, there really isn’t much value in playing another 100 mirror matches because you won’t learn anything new. Clearly all the versions of Food are very good, so if you like Sultai and having more removal, play Sultai and if you like Mass Manipulation and to be more straightforward and aggressive, play Simic.

If you are looking for something different that still involves Oko, the breakout deck of the tournament was probably Sultai Sacrifice. Even though it didn’t put anyone into the Top 8 of the MC, there were a full 4 copies of it in the Top 8 of the Grand Prix, including the winner.

This deck uses the Gilded Goose + Oko combination alongside the Cauldron Familiar + Witch’s Oven + Trail of Crumbs interaction. You have a lot going on and in theory, and it should be good against the other Oko decks. I’m a bit skeptical of not playing the Nissa + Hydroid Krasis combo, but clearly this deck does powerful things as well, and your curve is just much lower. I’ll be trying this deck on my stream this week to see if it’s the real deal.

I’m actually going to GP Sao Paulo this weekend, so I do need to figure out what I want to play. I’m still currently leaning towards Simic over Sultai because I prefer being more aggressive and it seems like now might actually be the right time for Questing Beast again. I think I’ll play 4 Aether Gust though, as Brazen Borrower wasn’t great for me at the MC. I think it was a big mistake to not play 4 Aether Gust as it is very good in the Oko mirrors. Mass Manipulation also seems good if the format is all Food, though it’s less good against the Sultai Sacrifice version. Keep in mind you can only steal creatures and planeswalkers. Oven can help them get rid of the creatures you are targeting, and they aren’t even playing Nissa and Hydroid, so you don’t really have great targets.

Sideboarding very much depends on what version is your opponent is playing. My best advice is to build your maindeck so that you don’t have to sideboard in the mirror at all, unless you want to bring in Veil of Summer for their Mass Manipulation. If they don’t play it, Veil is actually pretty mediocre in the matchup because if you don’t play your cards on curve, you can fall behind too quickly.

I really liked the Voracious Hydras in the sideboard for Edgewall Innkeeper matchups and Embercleave decks. Thrashing Brontodon is also good against Embercleave, but also against Wilderness Reclamation and Jeskai Fires. Lovestruck Beast doesn’t seem very important at the moment because there aren’t very many red decks.

The rest of the sideboard is fairly intuitive. You want to board out Wicked Wolves against control decks like Reclamation or Fires and Aether Gust and Brazen Borrower against the aggressive decks with a low curve.

If you are going to add Mass Manipulation to your deck, turn those Mobilized Districts into other lands to make sure you have enough blue sources.

To sum it up, the Food decks with black are better against the Adventure decks because you have access to Massacre Girl, and straight Simic is better against control and most non-Oko decks and Mass Manipulation seems better to me for the mirrors than Casualties of War. Questing Beast is only really good when there aren’t many Wicked Wolves. It might also be worth it to play Agent of Treachery instead of Mass Manipulation, because you can find it with Once Upon a Time. The downside is that you can only steal one permanent and you don’t have Teferi to bounce it to your hand, so if the game goes long, you would much rather have Manipulation.

As usual, this is where you can find me