New mechanics drive the bread-and-butter play of Limited. Mechanics are a key feature in ensuring that Magic sets are different from one another, and create variety in game play by encouraging different in-game goals. Understanding what a mechanic does helps inform you of what you should aim for in a typical game of Limited. I am intrigued by revolt, and today I’m going to look at some revolt cards to uncover ways they’ll play in game. 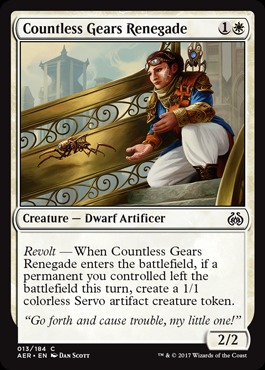 This is a simple design, but does a good job showing what revolt will often do in-game. Simply put, revolt is the same as the morbid mechanic from Dark Ascension a good amount of the time. If you attack early and your opponent trades, then you’ll get a bonus when you play your revolt creature. This means racing will become more common. Players will want to block and trade less often if the revolt triggers are strong enough. I’m not convinced that this card in particular will change your play patterns too much, because a 1/1 Servo is relevant but not game-changing. 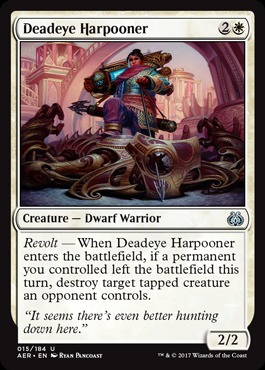 This payoff is a huge step up from creating a Servo, but requires more setup. First off, if you trade in combat, there’s no guarantee that you’ll be able to kill anything, because a tapped creature is a reasonably narrow subset of targets. Secondly, the Harpooner isn’t usually going to curve into killing something, and even when it does, it will kill a small creature. That said, this effect can completely turn a game around and help win a race or let you recover when you’re behind. The awkward thing is that you’re very unlikely to trade when racing or behind because your opponent will just take damage from an attack. Thus, this is the type of revolt card you need to set up rather than treat as a morbid trigger.

What other ways are there to trigger revolt? There are some pretty obvious plants like Renegade Map or the Implements, a 5-card cycle. With these sacrifice-ready permanents, you can enable revolt when you need it and turn Deadeye Harpooner into a reliable removal spell. It’s especially important with behind-the-curve creatures like this, because without revolt you just have a 2/2 for 3, which is embarrassing in modern day Magic. The extra effort to set up this card is worth it. 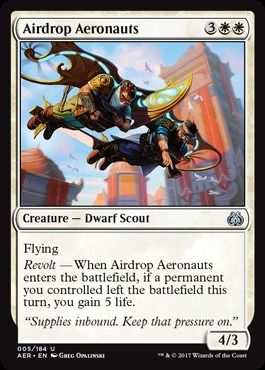 Next we have the type of revolt creature that plays well with a setup enabler or as a morbid creature. You really do want the effect because 5 life is a huge swing, and thus you’re incentivized to have a few ways to trigger revolt on your own. At the same time, you’re getting a 4/3 flyer for 5 when revolt isn’t turned on, which is a reasonable baseline. I like this type of card because you can slightly adjust how you draft but you don’t have to go all-in on it.

When playing against Abzan colors (blue and red don’t have revolt cards), it’s important to know the mana costs of the revolt spells your opponent could have. On turn 5, if you’re racing against a white deck, you probably won’t want to trade if you can avoid it since a 4/3 flyer that gains 5 in a race is nigh unbeatable. This is doubly true since your opponent will likely cast the 4/3 whether or not revolt is active just to get their big flyer in play.

Along these lines, turn 5 is also when Call for Unity can come down, a back-breaking rare that can drastically change the texture of a game. Thus, against white, turn 5 is the key “revolt” turn—it’s the turn you would rather not trade in combat, if possible. Note that if your opponent can turn on revolt anyway, then trading is fine once again since you can’t stop them from getting the trigger. 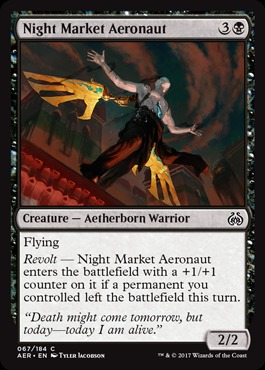 This is the most important card when considering trading against a black deck since it’s a common. Additionally, a 2/2 flyer is reasonable against Thopters, but quite bad versus the many 3-toughness flyers throughout the block. As a side note, Skyswirl Harrier is looking as strong as ever since it is bigger than most other flyers. It might even move up in the pick order with Aether Revolt thrown in the mix. 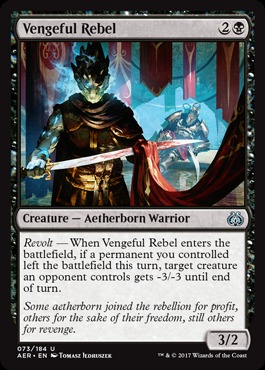 Unlike Deadeye Harpooner in white, Vengeful Rebel can hit any creature. I think it is going to ruin many 2-drop and 3-drop curves when revolt gets turned on early game in combat. Additionally, it is a reasonable body at 3/2, though that is a real loss in value. When your opponent makes a questionable attack with a small creature into your big one, this card should instantly spring to mind. 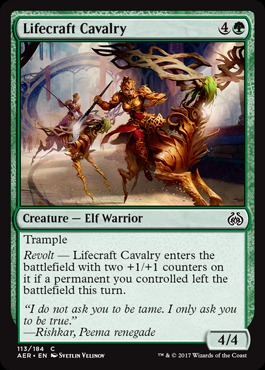 Lifecraft Cavalry is going to pop up all the time as a mainstay common and its counters take it from a C to a B-. As anyone who has attacked with Riparian Tiger can attest, a 4/4 and a 6/6 attacking on turn 6 are wildly different things. So again, you might not want to trade on turn 5 versus a green deck if you can help it.

One factor I haven’t mentioned yet is how well revolt plays with flicker effects. Imagine the following scenario:

Another important thing to remember about the expensive revolt creatures is that it’s much harder to turn on revolt via sacrificing anything with an associated cost (like Implement of Ferocity) because the revolt creature itself already requires so much mana. But they’re also much easier to trigger in combat because board states are much bigger as the game progresses, and so initiating a trade shouldn’t be too hard.

I bring this up because of how backbreaking it is to curve into after trading off 2-drops. Against W/G, I’d highly recommend racing on turn 3 if possible instead of trading. As an interesting note, this means it’s beneficial to try and hide your second color as much as possible when playing W/G with Renegade Rallier. If you have 2 Plains on turn 3, on the play, and attack with your 2-drop, you’ll be much more likely to get a trade than if you have a Forest and a Plains out. This case is only further strengthened by the existence of Silkweaver Elite.

Watch out for revolt! It’s a whole new take on the morbid mechanic, with some added subtlety. I’m excited to play with these cards to try and get all the triggers. Do your best to keep your opponent from getting value by trading at key points where revolt cards won’t blow you out!