I’m no stranger to building on a budget – as you probably know, I write $50 budget upgrades for the Commander precons when they come out each year, and I did something similar with the Brawl decks from Throne of Eldraine. I’ve also spent a lot of time building decks on Magic Online for under 10 tix, which presents a similar challenge. With Jumpstart coming out in July and being an entry point to Commander for players opening just a couple of packs and falling in love with a legendary creature, I thought it might be time to revisit the concept outside of an upgrade.

It didn’t take long, for example, for me to become enamored with Zurzoth, Chaos Rider: 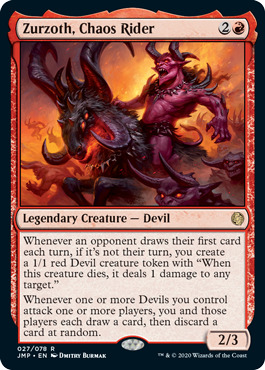 Zurzoth wants to be in charge of an ever-growing army of Devils born from opponents’ card draws. The obvious route to take here is to pack your deck with Wheel effects, generate a lot of Devils, and deal damage with cards like Purphoros, God of the Forge and Goblin Bombardment, but that’s not a budget-friendly option, and frankly, it’s not that interesting to me as a deckbuilder either.

Instead, my goal today is to build a deck with a $50 budget. As always, a few caveats:

So if we’re not going to have wheel effects to cause our opponents to draw cards off-turn, we’ll turn to the next best thing: some Devils. Zurzoth triggers when you attack an opponent with one or more Devils, so the key is to build a team of low-cost, expendable Devils that can get the engine started. Once that happens, we’ll find ways to deal more damage by triggering abilities when they enter or leave the battlefield, sacrificing them for value as well as the damage trigger the tokens generate themselves, and triggering additional damage when attacking with them. We’ll also be finding ways to amplify or otherwise double damage to increase our potential reach – often, this deck’s goal will be to deal 30+ damage in a turn by hurling a board of Devils into the graveyard.

I envision this deck churning through Devils turn after turn, whether it be by death in combat or by sacrificing them, so don’t get too attached to any of the ten that I’m about to list here:

I’ll be honest – some of these aren’t the best cards by themselves, so this deck really wants to keep Zurzoth around as much as it can. I tried not to commit too hard to medium-strength Devils, which wasn’t too hard given that there aren’t too many available.

Special notice should go to Universal Automaton as our only 1-cost Devil, Sin Prodder and Wildfire Devils as potential sources of card advantage, and Hellrider as the best card of the bunch. We’re going to be attacking with a lot of 1/1s, and any way we can leverage that will be key.

To complement these ten evildoers, I have five spells that will generate more Devils:

Tibalt’s anti-lifegain clause is surprisingly useful in Commander, and I assume a pack of Devil tokens will act as a great deterrent for any opponent interested in taking a swing. Ghired’s Belligerence is the only card available to us that populates, and if you can kill multiple creatures with it, you can generate quite a few Devils all at once. As for the rest, frankly, I just put all the cards that make Devil tokens in. They all seem to be activity-based – dancing, mischief-making, Devil’s Haircut, whatever, they all make more of the tokens we crave.

Now that we’ve got our core group of Devils, let’s find some ways to amp them up.

Pumping the power of the Devils when we go on the offensive seems prudent, but my favorite of these three cards is easily Furystoke Giant. Turn a pile of tokens sideways and deal massive damage to the dome – it’s very satisfying.

Similar to Furystoke Giant, but without the ability to split the damage up.

Of course, the ideal way to deal damage with creatures is in combat, so let’s take that to the biggest extreme we can. Cavalcade and Raid Bombardment both ensure each attacking Devil deals at least one damage per swing, while Throne of the God-Pharaoh counts up our surviving attackers (or otherwise tapped creatures) and puts pressure on all opponents to the tune of that much life loss.

Combine a few of these effects and we’ll have a decent amount of math to do, but that’s okay – the odds will be in our favor. Even the effects that double damage for a single turn can be hugely powerful if we’re swinging with or sacrificing a large board of Devils. Effects like Cavalcade really add up with these cards in play.

Like I said, Purphoros isn’t in this deck’s budget, but Impact Tremors makes the cut at its price point. This card is, on average, in every Commander game ever, but given that we’re propping up a budget deck, I don’t mind leaning on it a little.

We want our Devils to die, and when they do, it’s nice to add more damage triggers. This is one of the few decks that wants to choose the damage version of Outpost Siege, though I expect the Phyrexian Arena-lite choice will still be plenty useful when this deck needs to recover.

Speaking of dying Devils, let’s find ways to sacrifice them so we’re not counting on our opponents to do all the work.

The difference between Weaponize the Monsters and Blood Rites really shows us how far cards have come, but again, we’re not packing Goblin Bombardment here, and I wanted one more sacrifice outlet. Predator Dragon and Preyseizer Dragon represent the large threats that this deck otherwise doesn’t possess, and Blasting Station takes the title of most expensive card in this list.

Of course, if we left Devils as the only way to force other players to draw, I think we’d be remiss. I’ve added a couple of other affordable ways to make it happen, but they’re not plentiful in Red outside the wheels I’ve already dismissed. I dismissed Howling Mine effects as they lack the control we’re looking for – I don’t want them in play when Zurzoth isn’t around.

Temple Bell is the best of the bunch, and Runed Servitor scrapes by on the idea that we might be able to sacrifice it to create some Devils.

Speaking of card draw, we’ll need some of our own.

Actual raw card draw is hard to find in Red, but Staff of Nin makes the list as a very expensive Phyrexian Arena. This deck is capable of transforming Vance’s Blasting Cannons, so decide whether or not you actually want to do that at any given time. Commune with Lava is best cast in the end step before your turn.

Now that I’ve pushed our theme as far as it can go, let’s turn to some defensive cards.

The board wipes are actually synergistic with this deck, as they trigger all of our various death effects. Wild Ricochet is a great surprise spell to help protect Zurzoth, and Red Elemental Blast is justifiable because someone else at the table is surely playing blue.

A little ramp never hurt, and our three non-creature options all turn into cards when necessary, so they’re rarely awful topdecks.

Now we’re into the lands, and we’re starting with the ones that make other players draw. These are great ways to trigger Zurzoth that stay around through almost every kind of board-wide calamity.

Another way to boost an attacking team of Devil tokens.

Some utility lands – We’ll be playing a lot of Mountains, so I figured a trio of cycling lands couldn’t hurt. Scavenger Grounds teams up with Soul-Guide Lantern to be the only two pieces of graveyard hate we have, and Ghost Quarter and Tectonic Edge do a good job of cleaning up the occasional nonbasic.

From there, add 28 Mountains and you’ve got yourself a deck! All told, I’ve spent $49.96, which is about as close to the mark as can be expected here. Obviously there are plenty of ways to turn this deck from budget into bank-breaking, including buying cards like Wheel of Fortune, but I think this is a great place to start with Zurzoth and I’m excited to try this one out. Here’s the full list!