As the Modern format gets more and more popular, Wizards of the Coast has made the effort to slip more Modern playable cards into new sets. Ravnica Allegiance may be the set most densely packed with Modern goodies since Khans of Tarkir offered us delve. Below are five Modern decks that use RNA cards to their fullest. 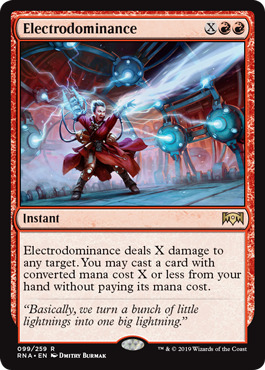 Despite seeing little-to-no play in Standard, Electrodominance has made quite a splash in Modern. The cycle of Time Spiral uncastable suspend cards all can be played with an Electrodominance at x=0. This includes Ancestral Vision, Restore Balance, Living End, and Wheel of Fate (it would include Hypergenesis if it weren’t banned). As Foretold, another recent printing to support Modern, offers a similar synergy. While the above example uses Living End, a Restore Balance version with Greater Gargadon is also viable.

This deck uses cheap cycling cards to fill its graveyard while digging for As Foretold or Electrodominance, along with Living End to reanimate all the cyclers. Funnily enough, many of the cyclers are also from a relatively recent set: Amonkhet. Ancestral Vision can be cast with either As Foretold or Electrodominance to aid in the digging efforts. Tolaria West can also find Living End, or silver bullets like Tormod’s Crypt or Chalice of the Void. Sideboarded Bottle Gnomes give you some life gain against Burn, and can even be returned with Living End.

Speaking of Burn, it may be the biggest winner from Ravnica Allegiance. It got not just one, but two big additions from the new set. Light Up the Stage is the big addition, as it’s essentially a 1-mana draw-two. In fact, to support Light Up the Stage, many Burn decks have gone to a lower mana curve, playing a black splash for Bump in the Night to support more 1-mana deal-3s. Speaking of 1-mana deal-3s, Skewer the Critics is a new one that makes Burn even faster. Burn is a force to be reckoned with in the new Modern, and even if you’re not a Burn fan, you should be aware of it and make sure you’re packing sufficient sideboard hate. 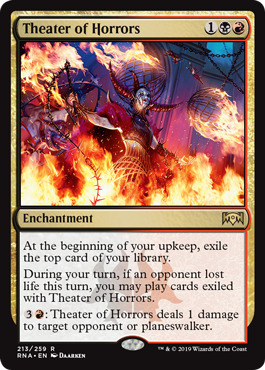 While Skewer and Light are the two spectacle cards that have really made it in Burn, there are a few others with potential. Theater of Horrors is a must-counter threat against control, and many slower decks don’t have a ton of ways to deal with enchantments. Burn sometimes sideboards Thoughtseize, and Drill Bit may spare you the 2 life in this deck. 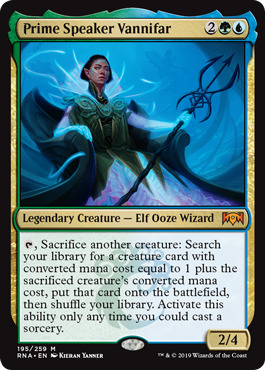 When a card similar to an already banned card comes out, people take notice. While Vannifar is more vulnerable than Birthing Pod, being a creature also has some advantages. Scryb Ranger and Bounding Krasis can’t untap Birthing Pod, but they can untap Vannifar. This difference means that you can combo from smaller boards.

For example, with only a Birds of Paradise and a few Forests in play: 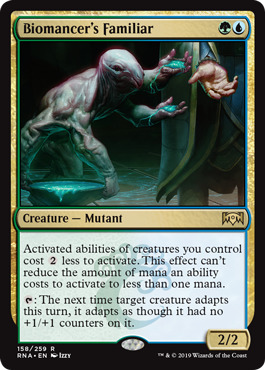 Not many adapt cards are Modern viable, but Biomancer’s Familiar is still quite suitable for the format. I’ve had my eye on Training Grounds in Modern for a while, but with limited ways to tutor for enchantments, it didn’t seem like a consistent enough build-around. With Biomancer’s Familiar added to the equation, it becomes a lot more viable.

Duskwatch Recruiter and Eldrazi Displacer both have incredibly powerful abilities that go down to 1 cost here, and there is also some value in Ballista pumps going down to 2 cost. While Devoted Druid + Vizier is the main infinite combo in this deck, you can also tutor for an Eyeless Watcher in a pinch and make infinite mana with it + Training Grounds/Familiar + Displacer. Finish them off with a Walking Ballista after that. Collected Company may be a good addition to this deck, but I was concerned it would miss too much with Training Grounds and Ballista as misses. Eldritch Evolution is also a consideration for additional tutoring power, but sacrificing a creature is a big cost.

While Pteramander has made a big splash in Standard and even Legacy, it also has some viability in Modern. Izzet Phoenix lacks a little in threats, and Pteramander offers a great one. The deck is already built to fill its graveyard with spells to support Phoenix and Thing in the Ice, which leads to Pteramander often pumping for only 1 or 2 mana. It is a big cost to cut spells from this deck for threats, but it does help insulate the deck from Path to Exile and other removal. Whether it ends up being in this deck or not, Pteramander will almost certainly show up in Modern at some point. It’s just too efficient not to. The ideal scenario with Pteramander in this deck is to play it with 1 mana up and only 6 spells in graveyard. Then, when your opponent goes to Lightning Bolt it, boom! Gut Shot their face and adapt your Pteramander.

Overall, I love the trend of having more Modern playable cards in new sets. It’s a tricky problem to thread the needle of making cards that are not too good for Standard while being playable in Modern, and I think design has done a great job recently. Did I leave out any sweet RNA Modern cards? Let me know in the comments below!