The Pauper Mythic Qualifier is just a week away, and for the first time someone is going to make it to a Mythic Championship because of Pauper. While the metagame has been relatively stable there are still edges to be had.

Many people like to talk about Pauper as a brewer’s paradise. Outside of the most competitive spheres of the format, this can be true. As one scales the pyramid, however, things become far more defined. The best archetypes tend to remain that way until new cards are introduced. But brewing is all about starting from scratch. What about tuning?

Pauper is an established metagame that benefits those that are in the know. Today I want to share some insights on pieces of tech that can benefit you both in the Pauper Mythic Qualifier at MagicFest Los Angeles and on Magic Online. 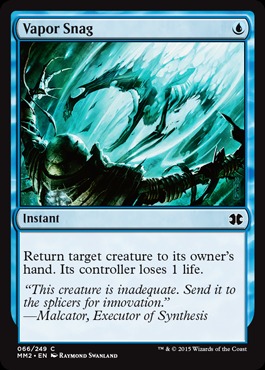 Unsummon and its ilk are often highly playable in Pauper. Historically, mono-blue Delver decks have led the way with Snap, using the “free spell” to leave up mana for Spellstutter Sprite. While Snap still sees play, bounce effects seem less attractive at the moment. Both stripes of Boros Monarch would welcome a chance to recast Palace Sentinels and the different builds each have cards that laugh in the face of one-for-one bounce in Kor Skyfisher and Battle Screech. Of course, that only matters if the game goes long.

Dimir Delver wants to end games quickly. While it is perfectly capable of winning a protracted attrition battle, part of the strength of the deck is its ability to stick an early Gurmag Angler and ride the 5/5 to victory. In Dimir Delver, Vapor Snag serves as a way to crunch through for damage, putting the opponent firmly on defense. But against Dimir Delver, Vapor Snag is gold.

Gurmag Angler requires a lot of effort to get down early. Burning cantrips to fill the graveyard is great when it means a quick threat. But those cantrips are not renewable resources and once they’re gone, they’re gone. The consequence of this is that it can become trivial to strand multiple copies of Gurmag Angler in the hand of Dimir Delver if you can bounce the Zombie Fish. None of this matters if you cannot capitalize on the tempo gained, which often means running your own Angler or something similar.

Let’s talk about tempo for a second. Sure, it’s one of the hardest theoretical concepts to define in Magic but why should that stop me? The way I want to use the term today is to describe trading card economy—that is, a resource—for a temporary advantage on the battlefield. Using Vapor Snag as an example, you can remove a Gurmag Angler to swing the balance of the board in your favor but at some point that advantage is going to be negated when the big Fish comes back.

Dead // Gone is not an ideal tempo card. A 3-mana bounce spell is nothing to write home about, especially since the cost makes it hard to capitalize on the tempo by playing your own threat. But Dead // Gone has the advantage of coming with half a Shock on, well, the front half. The utility to handle either of the big threats out of Dimir Delver—Delver of Secrets and Gurmag Angler—on a single card should not be underestimated. The biggest thing holding the Planar Chaos card back is that there just isn’t a good home for it at the moment. 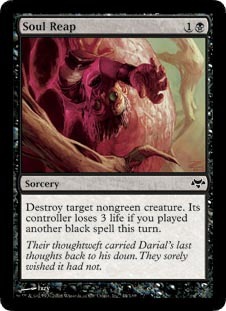 We have spent a decent amount of time talking about the problem that is Gurmag Angler. A 5/5 black creature that dodges some of the format’s most efficient removal spells—Lightning Bolt and Snuff Out come to mind—and only Journey to Nowhere is a heavily played answer. Some decks have taken to running Narcolepsy or Curse of Chains as a way to handle larger threats. Soul Reap has the advantage of taking out almost every creature that currently sees play at the top levels of the format. The removal spell already has started to see play, and with Stompy all but gone from the metagame, Soul Reap is primed to break out.

Soul Reap has another huge advantage—it’s a sorcery. Why does this matter? Dispel is seeing quite a bit of play in various blue decks as a piece of 1-mana interaction. The fact that decks are leaning on Dispel means that sorceries such as Soul Reap and Skewer the Critics have a far easier time resolving. Spell Pierce is not nearly as good as Dispel in countering instants, but it does quite a good job handling everything that isn’t a creature.

In the wake of Gush and Foil powered Dimir Delver, decks have been trying to resolve more high impact spells early in the game. The result is that key cards are being cast when mana is scarce. Spell Pierce can do a good job of neutering a Skewer the Critics or countering a Foil. The biggest thing holding Pierce back is the fact that it is useless against Palace Sentinels.

Yes, Spellstutter Sprite. This Faerie has not exactly gone away—it’s seeing plenty of play in Delver —but it is another piece of disruption that gets around Dispel. Sprite is a staple of Pauper and its recent decline in popularity has seen a resurgence in decks that lean heavily on 1-mana spells. I’m talking about Burn. Burn has had a couple of very strong weeks since cards like Lava Spike and Chain Lightning are that much harder to counter (we see you Dispel). And Spellstutter Sprite does not need friends to be a back breaker. You can leave your Faerie Miscreants at home and still have a counterspell that leaves behind a pesky 1/1 flyer.

Less than a week remains between the time when this article will go live and the Pauper Mythic Qualifier. These five cards could help to decide the outcome or just as easily succumb to the established metagame. There are more options, obviously. So let us know: What hidden gems in the format do you think have a chance to breakout at MagicFest LA?