We’re well underway with War of the Spark previews, and today I want to go through the cards I reckon have some potential to make waves once the new Magic: The Gathering set joins us. Let’s get right into it! 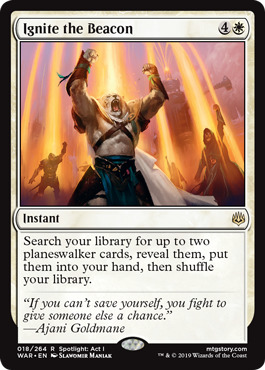 A card that leaped off the page for me was Ignite the Beacon. Typically, tutor effects don’t tend to fare that well in Standard (the current position of Mastermind’s Acquisition notwithstanding), as they’re overcosted and not as efficient as their forebears. Conditional tutors are even worse off—for example, despite Theros bringing us a huge number of enormously powerful enchantments, Plea for Guidance didn’t see any play at all.

Ignite the Beacon, however, is in a position to break the mold. Why? Because it’s an instant! In a deck full of instant-speed interaction, Ignite the Beacon is an upgraded Chemister’s Insight or Precognitive Perception. Instead of just drawing two cards, you get to draw the best two cards in your deck. Given the wealth of planeswalkers we have now, it’s not difficult to pull together a good old fashioned superfriends list.

With nine main-deck planeswalkers, Ignite the Beacon is in a position to do some real work. Some of these inclusions are definitely experimental—I don’t have hugely high hopes for Jace, Wielder of Mysteries—but a card like Liliana, Dreadhorde General is a hard-hitting win condition that reminds me of Elspeth, Sun’s Champion. She comes down and immediately dominates the board, demanding an answer as a game-winning threat.

Teferi, Time Raveler has huge upside against both aggressive and controlling decks. He completely invalidates opposing counterspells—everything you cast is now effectively uncounterable—and allows you to snipe cards in their draw step with Thought Erasure. I’m most excited, however, to get ’em with an instant-speed Kaya’s Wrath after deploying Teferi!

Adapting the existing Esper shell to make the most of Ignite the Beacon is straightforward enough, and I like that this new double-tutor adds real velocity to this deck. Instead of churning through cards with Chemister’s Insight hoping to find Teferi, you can now expedite the process and go get him directly, along with another planeswalker for backup. 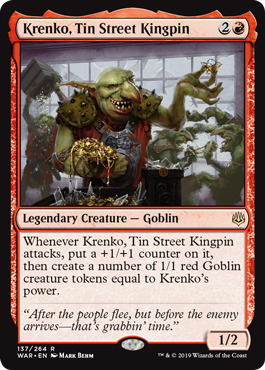 Krenko is back after a long time on the sidelines (anyone who has played Ravnica D&D will know Krenko was in a little bit of trouble with the Boros Legion). There are actually a ton of very powerful Goblin cards in Standard right now—everything from Goblin Chainwhirler to Siege-Gang Commander!

Maximizing the return on Krenko involves bringing in Goblin Trashmaster, which also works well with the token subtheme of other cards like Goblin Instigator and Siege-Gang Commander. This deck has a bit more depth to it than you’d think at first blush. In particular, Skirk Prospector can lead to some insane starts (turn-3 Siege-Gang, anyone?). Still, the list is rough, and we haven’t gained too many new toys from War of the Spark.

What about adding green, for something like Zhur-Taa Goblin, or Status // Statue to go along with Goblin Chainwhirler? It’s not out of the question. The Good Doctor tells us you need 14 red sources for Fanatical Firebrand. and 13 green sources for Zhur-Taa Goblin, which can be done with the addition of Unclaimed Territory. All this while still keeping 23 red sources intact for Goblin Chainwhirler—easy game!

The previous list was weak on 2-drops, and Zhur-Taa Goblin goes some way toward rectifying that problem. Additionally, current Gruul Midrange lists play the Chainwhirler/Status combo (which, in case you don’t know, destroys all of your opponent’s creatures thanks to the Chainwhirler having deathtouch), and it’s set up to do good work here. Not to mention the sideboard all-star Cindervines, as well as a go-big planeswalker package when Skirk Prospector and Fanatical Firebrand aren’t going to get there.

Reddit user Crasha pointed out the possibility of an infinite combo with Ral, Storm Conduit, and it doesn’t even involve playing actively bad cards! Ral’s triggered ability means, as Reddit user Sambos went on to point out, if you have two copies of Expansion // Explosion in hand, you can win the game on the spot as soon as there’s an instant or sorcery you can copy with Expansion.

Whether you or your opponent cast it, it doesn’t matter—Ral can immediately ping them to death. Cast Expansion targeting anything at all, and hold priority to cast Expansion, targeting your first Expansion. From there, you have an infinite loop of Expansions copying Expansions, and each copy does 1 damage to the opponent!

This is a cut-and-dried control deck, with every non-win-condition card designed to either manage the board or draw cards. The curve is as low as possible to give us as many targets for the Expansion combo as possible. Ideally, you can kill turn 5 by casting an Opt or Shock, and then going off. But there’s always Niv-Mizzet as a backup!

How realistic is this combo? In all honesty, I don’t think it’s an unreasonable way to seek victory. Ral is pretty resilient, going up to 6 loyalty the turn he’s played, and he himself adds to the enormous amount of velocity this deck has with his scry ability. Assembling three cards for an instant-kill isn’t much of an ask, and when most of the deck is cantrips and card draw, it becomes that much easier.

There are all sorts of other silly options like Doublecast or Naru Meha, but I don’t think they’re necessary. Instead, I like porting this instant-win button into the existing Izzet Phoenix/Drakes list, as it has a proven track record. This combo might just be worse than reanimating Phoenixes, but it’s worth taking the time to find out.

We’ve only just started with War of the Spark previews, and already it’s incredibly exciting to assess the possibilities that are opening up to us once it arrives. As we see more and more cards, it’s only going to get better. I, for one, welcome our new planeswalker overlords!