When we first started playing Magic, we of course put all of our black cards and all of our Swamps into the black deck. There were many Scathe Zombies. 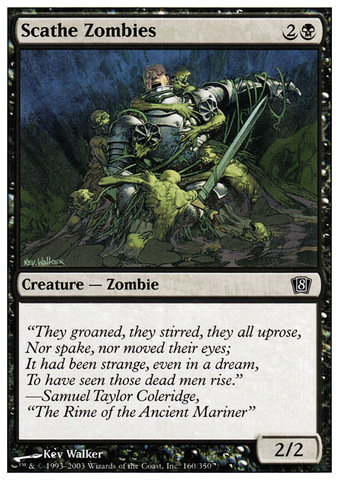 As we obtained more cards, the black deck grew as a rule. More Scathe Zombies were added, although our acquisition of Swamps did not keep pace.

Our “fix” was a starting hand rule of 5 basic lands. That way there was never mana screw and rarely mana flood. Instead, there was a flood of Scathe Zombies.

At some point my brother had a revolutionary discovery. He must have been about nine years old, and I seven. He discovered that we could cut cards.

Instead, he would start with a Kjeldoran Dead, which according to our rules could be sacrificed and regenerated on the first turn with a Dark Ritual. Unholy Strength and Feast of the Unicorn enhanced the Zombie and the games were quickly over. 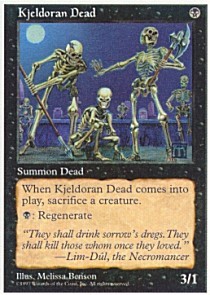 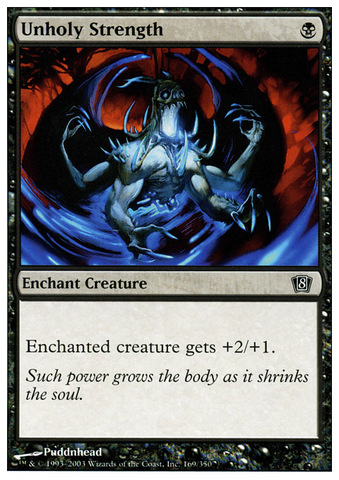 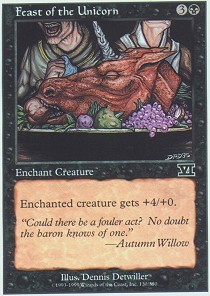 The deck was consistent. Almost every game played out the same. It executed. Amazingly, the SMALLEST deck was also the BEST deck! There were no Scathe Zombies getting in the way of the good stuff.

This is the power of addition by subtraction. We were of course, not the first to discover it. It is a practice that goes back many thousands of years, and has become a staple creative process used by the great contemporary thinkers.

The sculptor Michelangelo, made his statues by reduction. The great modern writer Stephen King revises by crossing through and scratching out. The martial artist philosopher Bruce Lee speaks of the importance of simplicity through “daily decrease” and “hacking away at the unessential.” And then Arnold Schwarzenegger built his world famous body with a process of cutting fat.

Addition by subtraction is also well supported by the economic theory of opportunity cost:

In recognition of the power and consistency of ultra slim decks, Wizards has instituted a minimum deck size. We get to play with 40 cards in Limited, 60 cards in Constructed, and 100 cards in Commander.

This minimum deck size is instituted as a power check. Decks would be too strong, too consistent, too repetitive, too competitive without it.

But I’ve been wondering where we would be without the minimum deck size—what would happen if we could play with 30-card Constructed decks in 2015?

I imagine the crazy overpowered decks that would exist. And I want to see what others would come up with.

The idea of this deck building challenge is to see how Modern would break if the limit were dropped from 60 cards to 30. Of course we want to see creative and fun, but specifically this week I want to see BROKEN.

Submit your deck list in the comments. I will pick what I feel to be the most broken deck and the winning deck designer will win $25 CFB store credit.

While I will be somewhat influenced by presentation, the purpose of this exercise to try to produce the most competitive deck. Your job is to come up with that strategy and convince me that yours is the most unbeatable.

I’m excited to see what you come up with!