With War of the Spark hitting the streets, it means another new Standard format. Going into the SCG Open, there was a lot of buzz around Simic Nexus and how well some of the new cards slotted in, so did it end up taking over the weekend?

Well, based on the Open and MCQ results (that I’m aware of), the leaders were:

Off-meta decks also had a bit of a field day at the first weekend of MCQ events without a real firm grasp of the metagame to keep everyone to the established field. There have been some real interesting archetypes (W/B Midrange, Vannifar Pod, Azorius Aggro, etc.) popping up here and there, and it’ll be interesting to see if any of them catch on. But without more details I find it difficult to assess these in a vacuum, so I’m going to stick with the big four for right now.

Mono-Red Aggro doing well in a week one tournament? Say it isn’t so! Yes, to the shock of no one, red continues to perform well in less established metagames even with the introduction of some really brutal sideboard cards. Ironically enough, red also got a handful of new tools that weren’t really talked about, though I touched on Tibalt, Rakish Instigator in my last article.

It turns out that Tibalt, Rakish Instigator indeed does enough to justify sideboard inclusion. In fact, you could see the little scamp as a 2-of in the top 3 red decks from the last Open. Against Esper and Dimir Control it represents one of the best answers to cards like Enter the God-Eternals and other life gain annoyances. It also produces some controlled pressure even when the board becomes a bit untenable, without being soft to Moment of Craving or similar removal.

In fact, one notable dichotomy was just how bad many of the usual sideboard creatures were against the newer Esper builds. They’ve become much better at dealing with the Warbosses and Phoenixes of the world. The midrange builds in particular can simply stall and then turn the board around with cards like Kefnet, Enter the God-Eternals, and Lyra Dawnbringer. Meanwhile, Oath of Kaya looks like it may pick up in popularity as a good answer to red aggro and a secondary win condition for the deck against Simic Nexus. 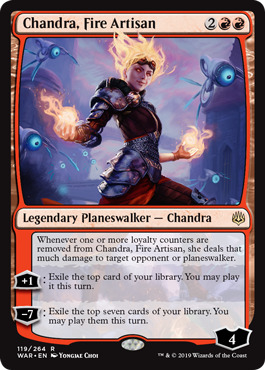 As for other additions, Chandra, Fire Artisan wasn’t a universal inclusion but did show up as a playset in the winning red deck by Will Pulliam. Chandra gives the deck a bit of reach in the same vein as Experimental Frenzy, but without the same all-or-nothing approach. Both cards are going to win given enough time, but Chandra has different pros and cons such as being stronger in the mirror and difficult to deal with unless you’re getting dominated. Chandra also plays much better with 3- or 4-drops out of the sideboard than Frenzy where you can clunk up your spell chains if you see too many.

When talking with KanyeBest, who reached #1 Mythic last season with Mono-Red, I asked his opinion on the current split between the various card draw options.

“It’s entirely context dependent. The reason Chandra was so good at the Open was because there was a ton of enchantment hate against Simic Nexus. All of this incidentally hits Frenzy and makes it into a massive gamble for that type of metagame. Risk Factor is fine in a vacuum as well, but opponents playing Narset and Teferi are going to reduce the value you get out of your Factors.

I think Frenzy is still the best overall choice, but it remains dependent on what you expect to see in terms of hate.”

Regardless, it looks as though red is still going to be sticking around despite the heavier emphasis on other midrange and board control strategies. Moving forward, if other small ball-aggro decks aren’t shown to be making waves and Llanowar Elves aren’t in heavy demand, it may be time to consider shelving Goblin Chainwhirler. If the meta sticks to something approximating this, it’s just average. We’re moving toward a format where a card like Tibalt, Risk Factor, or Chandra may end up better in many game 1 scenarios.

Simic Nexus, on the other hand, had a more polarizing outcome. On one hand you could say that it didn’t perform up to expectations and that while it put up some decent results it was ultimately shut out of Top 8. It was the most played deck on Day 2. So doing somewhat well shouldn’t come as a shock.

On the other hand, Simic Nexus performed very well in a field where people were cognizant of the deck’s strengths and despite that, four finished in the Top 16 and it put a lot of people into Day 2. Narset and Tamiyo were both big additions that increased the consistency of the deck and helped solve some of the problems it had against blue decks. We’ll likely see even more of it moving forward and it’s possible the deck gets even more refined with time.

Simic Nexus was one card away from being the best deck in last Standard and the same potential is here for it to dominate any tournament where enough participants don’t respect what the deck can do. Of note, the Bant decks packing main deck Teferi, Time Raveler, Deputy of Detention, and Frilled Mystic are good examples of how midrange can stand up to the deck without sacrificing their entire sideboard to fight it.

Speaking of Bant Midrange, it was the dark horse winner from the weekend. Harlan Firer and Rudy Briksza piloted a nearly identical build to the Top 8 of the Open. Of course, we saw a very similar start last season with Bant Midrange performing admirably and then falling off the face of the Earth. So what’s different?

It turns out we went from playing good planeswalkers in a bad shell to playing two very good planeswalkers in Teferi, Time Raveler and Vivien, Champion of the Wilds in a shell that plays to their strengths. Teferi adds a very solid weapon against both Esper and Nexus decks game 1 and Vivien is just a Militia Bugler that doesn’t suck. Now throw in Oketra as a card that often presents the type of threat The Scarab God did in the past. If your opponent doesn’t deal with it, you just attack with your virtual 6/6 while making an army of 4/4s. Between Oketra and Hydroid Krasis, your 8-mana dork deck actually has some reasonable conversion.

Despite this, the deck is still as straightforward a strategy as it gets and it has a lot of air in it. It could very easily end up a one-week wonder, but the surprise value from this type of strategy shouldn’t be underestimated. I could easily see a lot of variants surprising people with unexpected card choices (other main deck countermagic, Neoform, God-Eternal Rhonas, etc.).

Esper Control was another highly touted strategy coming into this weekend, but all my experiences with it have come from the other side of the table. Not much has changed, except they got a buff against aggro decks thanks to Enter the God-Eternals and Kefnet.

Main-deck Narset will likely become more commonplace as a way to limit the most common Teferi, Hero of Dominaria slam-and-win lines while having incidental value against Nexus. It turns out getting a pair of Search for Azcanta activations out of the deal while not being vulnerable to Mortify is another pretty big benefit in the blue mirror. Alternatively, deal with opposing planeswalkers by simply attacking them by going the Esper Midrange route a la BBD.

As for which version is better… again, I’ll be upfront and say I don’t know which deck is better. The Esper Hero decks from last season had the exact same trajectory as Bant where they fell off after a few weeks. It comes down to whether or not the early drops justify themselves and your added weaknesses to removal.

We’ll see how things shake out, as some of the decks are the same as last format, but with Mono-Blue no longer an actual deck. Sultai also took a major fall from its dominating position as the go-to midrange deck. Perhaps we’ll see a resurgence of these in the future, but for now it seems like a changing of the guard.