Hello again, Commander lovers! Last time, I talked about one of the two Kaldheim Commander preconstructed decks, Elven Empire, and upgraded it a bit on a $50 budget. Today, I’ll be doing the same thing with the other deck, Phantom Premonition.

Phantom Premonition is helmed by Ranar the Ever-Watchful. 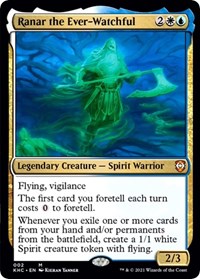 Ranar makes it easier to foretell cards, which is amazing given that foretelling often provides a discount on casting said cards while also keeping them safe from pesky discard effects. He also rewards you for foretelling or otherwise exiling cards from your hand or the battlefield in the form of 1/1 Spirits. It’s notable that exiling a whole bunch of things at once only grants you one token, so doing things piecemeal will provide more value.

Here’s the deck list as you’d find it in the packaging:

My biggest concern about this deck as it stands is mana costs. Ignoring lands, the average converted mana cost of the deck is 3.98, which is dangerously high and speaks to a deck that needs to have Ranar in play at all times for that discount. Worse yet, among the 12 cards with a converted mana cost of six or more, only two have foretell, and none of the others have cost-relief mechanisms. Inexplicably, this deck also starts with just 36 lands!

Due to the relative density of foretell cards – only 10 cards in the deck have the ability – Ranar also has a blink subtheme, an exile subtheme and a token theme. This makes the Ranar deck a great deck to modify and a tough deck to play out of the box, which is in stark opposition to the Lathril deck I previously upgraded. I’d like to push the foretell theme a little further (more than that isn’t really possible) and move the token theme to the forefront, with a focus on Spirits, while leaving some of the other synergies in as part of supporting that theme. 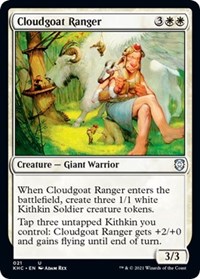 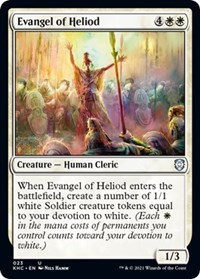 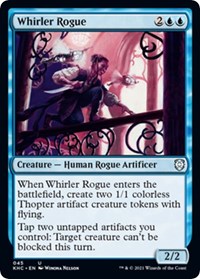 These are solid token generators, but they’re not about Spirits, and I’d rather focus on that. 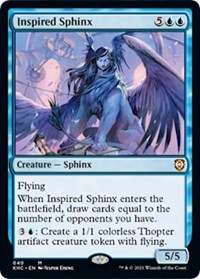 I like the idea of blinking a 5/5 that draws three cards, but I’m trying to lower the curve and this isn’t what I’m looking for at seven mana. 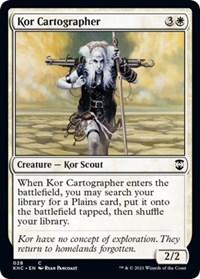 As long as there’s a green player around, you can do better. 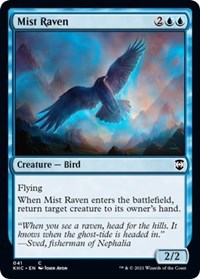 You can find better things to blink – in fact, many are already in this deck. 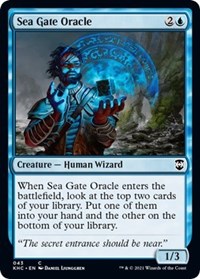 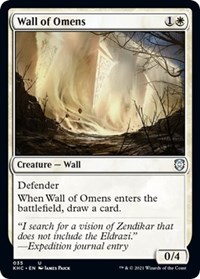 There are quite a few ways to draw cards already, and I’d rather spend the early turns foretelling if I can. 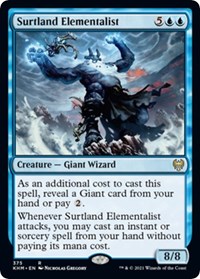 This card costs a ton and doesn’t really fit the theme – out it goes. 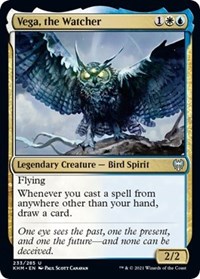 Even with more foretell cards in the deck, I’m not sure the deck has enough focus on this for Vega to do enough. I’d rather play this as a commander, as you may have seen in my recent newsletter (Sign up for CFB Xtra today if you missed it!) and really get a ton of cards from it.

So what comes in?

These three creatures all help pump up your Spirit tokens, and Angel of Invention has the additional bonus of being a solid blink target. It’s been a long time since I’ve had an excuse to play Drogskol Captain, and I’m excited about that.

More support for your tokens! Twilight Drover pumps out more tokens when yours get cleared out and Mentor of the Meek refills your hand as they come in.

I love Amphin Mutineer, and I love it even more when it comes back via encore, exiles three opposing creatures and nets three Spirits since that’s from three separate triggers. Cosmos Charger lets you foretell at instant speed, which is a huge bonus as well.

Glorious Protector is another great foretell card that also exiles things – I don’t think there’s a loop with it in here, but feel free to find out yourself. Knight of the White Orchid is a great way to play catch-up with ramp players.

Glasspool Mimic is a great card, and with all of your ETB effects, it’s a solid inclusion. The Zendikar Rising MDFCs will have a home in Commander for a long time, and I hope there’ll be more soon.

Having only spent $16.40 of the budget so far, what will we do with noncreature spells? Let’s make some cuts. 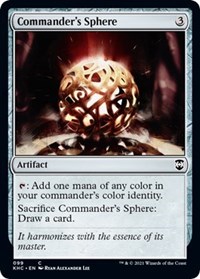 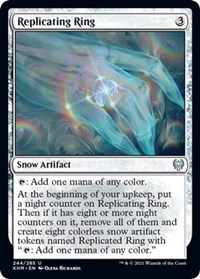 These three mana rocks are the first on the chopping block – there are so many rocks in the deck already and I’ll be replacing them with a land and another, better three mana rock. 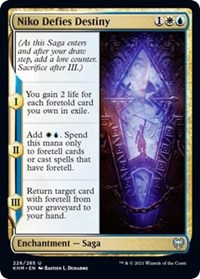 Even with the foretell theme, this card just doesn’t do enough over three turns to justify an inclusion. I’d rather just cast an Archaeomancer, and even that didn’t end up in here. 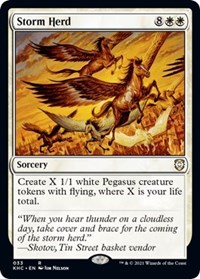 A ten mana spell in a deck built with 36 lands? Even once I upgrade it I can’t countenance this one. 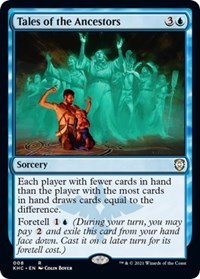 I wasn’t super nice to this card in my set review, and I feel justified about that. It’s so rarely going to be castable without giving away a huge pile of cards, and this isn’t a Xyris deck. 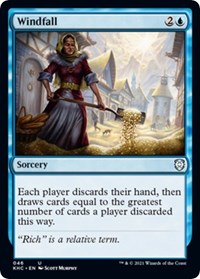 I understand the idea here – foretell your hand away, then cast this – but this deck just don’t have enough foretell to justify it, and without playing some really bad rate cards, I can’t.

I’ll be bringing in one less card than I cut here, as one spot is going to land, so let’s talk about my five replacements.

Midnight Clock is an amazing way to refill your hand, and I think it beats Windfall by a mile in this deck. It’s also a reasonable place to put extra mana.

Call for Unity is fantastic in this deck, as with all of the blink synergies you’re very likely to trigger it on each of your turns. It’s no Cathars’ Crusade, but I’m just not interested in doing all the bookkeeping that card asks for – and that’s before you talk about power level. Court of Grace pumps out a token each turn, and with all of the 1/1 flyers you have, I think you’ll be well able to hang onto the crown.

Sejiri Shelter helps keep Ranar around while also playing the role of emergency land drop. Doomskar isn’t the best Wrath in the universe, but with the foretell synergy being so important in this deck, I felt like it was pretty much required.

I’ve now spent just $29.55, which is great – I love to leave room for some solid land upgrades. So which lands get cut? Well, the ones that enter tapped, of course! 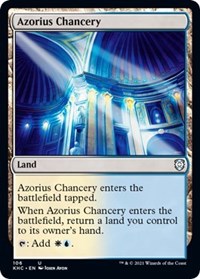 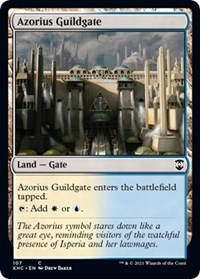 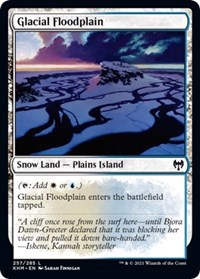 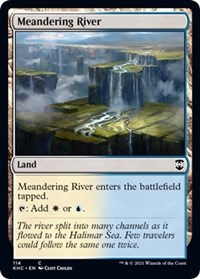 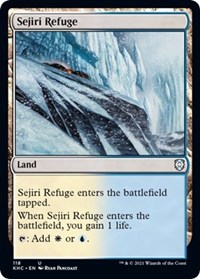 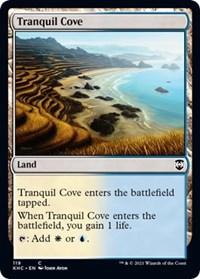 I’d rather not have these enter the battlefield at all, thanks. 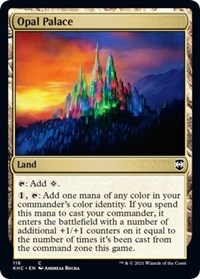 I’m not trying to get people with commander damage, so I’m not super excited about Opal Palace here.

With the extra slot I held over from the last category, I’ve got eight spots for land. Here’s how I spent them:

It’s great to be able to upgrade the mana base so much. I know Irrigated Farmland enters tapped, but it cycles, so that justifies it for me. The rest will usually enter untapped and make you very happy to have them – and they’re the kind of cards you’ll want in your collection for Commander anyway. I know some people like to wait for things to rotate out of Standard, but Hengegate Pathway is downright affordable.

Finally, let’s make sure you can deal with opposing utility lands when you need to. This is one of the things that can help decks punch a little bit above their power level.

Altogether, we’ve spent $49.15, which leaves us $0.85. Scatter the 85 pennies around your home and forget about them – it’ll be a fun scavenger hunt later (disclaimer: it will not). If you’ve got your own sweet Ranar list, tweet it to me at @RagingLevine so I can be hyped about your cool ideas. For now though, here’s my list – see you next time!