Here’s my Unpopular Opinion: Gadrak, the Crown-Scourge can be a fun Commander.

We’ve rotated around to mono-Red, and with that, it’s time to look at one printed in the last century. Sure, Gadrak is new to the scene, but with Commanders like Zurzoth putting up many more decks on the EDHRec board in less time, I think it’s safe to say Gadrak is underappreciated. With only 33 decks appearing on EDHRec, Gadrak ranks #765 among all Commanders.

Let’s see what Gadrak has to offer us: 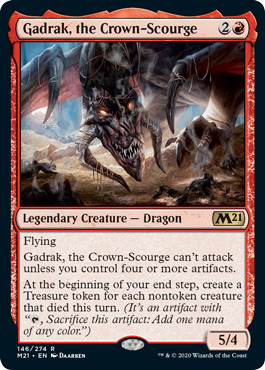 Pricing out at an incredible $0.59, Gadrak won’t break the bank in real life, but according to the Core 2021 lore, “he has embarked on a campaign of fiscal (and physical) carnage,” making him my kind of budget Dragon. Gadrak is clear about his needs, which I appreciate – his love languages are gifts (treasures) and acts of service (the deaths of nontoken creatures). With that in mind, I’ll be focusing on making sure creatures die, whether they started on our side or were gently convinced to come visit our side of the board before being nudged off a cliff.

Let’s take a look at our creatures who come primed for death:

This superfecta of Ball Lightnings through the ages is here to show up and blow up. Beside the original, which is here for flavor, the rest are here to live, die, and live again, Mad Max style. That means we can deal some damage and then amass some treasure to use later on some of our more expensive endeavors. Gadrak is nothing if not fiscally responsible.

These have less Ball Lightning flavor but still play with the recursion theme. Flamewake Phoenix is easy to bring back repeatedly, while Hound of Griselbrand and Tuktuk both come back for a shot at a better second life. Tuktuk was also a consideration as a Commander for this series, especially since the changes to the rules about Commanders dying, but I thought this overall theme was more fun.

If you’re looking for a great creature to sacrifice, try Squee. The worst case scenario is that someone decides to blow up your graveyard just to stop you from casting him over and over again.

These creatures provide serious ramp, and you’re never sad to see them head to the graveyard. (Well, I suppose you’re sad to see Burnished Hart get shattered or something, but that doesn’t happen a lot.)

Mono-red decks are not known for their card draw power, and if we can activate this and then send it to the graveyard somehow, we’re beating the Divination rate very slowly.

Okay, so some of those creatures die by themselves, but some don’t – how are we sending the latter group on a trip to the card graveyard? Well, let’s check out these scintillating selections:

There’s something really delightful about activating a Bloodshot Cyclops to throw Thunderblust around, and the other options aren’t too bad either. Scorched Rusalka gives us some bonus damage to the dome, while Thermopod means we can keep the engine running a little longer by producing more mana. Greater Gargadon is on a similar bent – it doesn’t make mana, but it at least lets us sacrifice things for free. Dark-Dweller Oracle provides more cards, while Blood Aspirant is honestly only here to get huge.

How are we going to benefit from all this death?

Well, we can throw lots of damage around all over the place. It’s no Aristocrats package, but it’s still very strong, and if enough creatures die, we can end games pretty quickly as long as they were already half over. Honestly, Stalking Vengeance can pretty much do the job all by itself.

We won’t get treasure from the Satyrs dying, but the Satyrs themselves are reward enough.

We have lots of creatures that are set up for an exciting death, but as every sacrifice enthusiast knows, it’s never enough. How are we going to get access to a wealth of nontoken creatures that don’t start in our deck?

We’re going to take them, of course! Opportunistic Dragon might be more about taking artifacts, but the rest are serious contenders in the Threaten category. Captivating Crew’s repeatability is really important – with Gadrak in play and a sacrifice outlet available, it’s easy to pick apart an opponent’s board without needing too much mana. Admittedly this engine doesn’t quite cut it against token decks, so we’ll be attacking those on other angles. Zealous Conscripts is more about stealing that planeswalker that’s about to hit its ultimate, but if you have to steal a creature with it, so it goes.

I’ve got two more creatures before we move on to the rest of the deck:

These two couldn’t be more different, but they’re both very important. Iron Myr adds some ramp to the deck and can be sacrificed in a pinch, while Inferno Titan is just a good card – it can end some games that our sacrifice damage engine might not.

Let’s move on to the non-creature spells. We’ll need more sacrifice engines, so let’s start there.

More repeatable sacrifice outlets – we definitely need more with all the stuff we’ll be stealing. (Spoiler alert: we have more ways to steal stuff coming right up.) Shivan Harvest covers my desire to destroy nonbasics, while Culling Dais and Makeshift Munitions cover card draw and damage. Hazoret’s Favor is just a cheap way to ensure we can hurl stolen creatures into the abyss more often.

You remembered Fling and Thud, but I bet you forgot about Rupture. Everyone forgets about Rupture, which makes sense, because it’s not as flashy. If you need to cast an Earthquake that relies on the power of a sacrificed creature, though, it’s your best bet.

You forgot about Tears of Rage, didn’t you? You thought you’d get away for the rest of your life without ever seeing this bad, bad card. Well, bad news – I’m here and I’m going to play this one. Sure, it requires a lot of mana because we’ll have to first steal a bunch of stuff to make it worthwhile, but I’m absolutely going to keep it in the deck because the one time you pull it off, it generates so much story equity.

Before we go to my litany of Threaten effects, let’s take a look at two cards I’ve included to really make Treasures more useful.

I’m certainly going to admit that these two don’t work well together. You do have to tap Treasures to use them normally, which means Inspiring Statuary doesn’t let you double up in a single turn – that said, it means you can basically keep the Treasures around and use them turn after turn. Summoning Station is more focused on using the Treasures the traditional way and giving you some 2/2s to work with. They are Pincher tokens, and that is horrible. I have no way to follow up on that so I’m just going to show you all the Threatens.

I’ll be the first to admit that this list of ten Threaten effects isn’t a balanced diet. Think of it less as a one-note restaurant menu and more as the list of pastas at a pasta-only café that does really good contactless delivery. Speaking of contactless delivery, this one’s a little harder to play in webcam Commander, but at least you’re only borrowing every creature instead of permanently stealing it. I’ll highlight some favorites: both Mob Rule and Mass Mutiny get you plenty of creatures for a single card, and The Akroan War gives you more of a car lease rather than a rental.

Let’s take a look at some utility cards:

A little extra removal never hurt, and while we’re doing most of our creature killing by stealing and sacrificing, sometimes a surgical piece of removal is what matters.

Another board wipe to go along with Rupture. Knock those token decks off their pedestal, since you won’t have many other ways to do so.

Sometimes you need to maneuver things the way you want them. Bolt Bend has synergy with Gadrak, our large but low-cost Commander, and Wild Ricochet is always good value.

Sometimes those blue players just won’t stop with all their blue spells. I play one of these in basically all of my red decks now just to make people think twice. It won’t really change their play pattern, but it’s sweet when you hit their big X spell or win a counter war.

Gadrak will be attacking, so Tome of Legends is a natural fit. The other two are simply personal Howling Mines that unlock some more plays per turn, putting this mono-red deck closer to parity with decks that have access to other colors.

I had some extra room in the budget and decided to shoehorn some value in here. It’s the Inferno Titan of the noncreature category.

Guardian Idol is a creature in a pinch, while Mind Stone is just one of those inescapably strong mana rocks. Ideal mana rocks cost 2 – I try to stay away from the 3-cost ones in mono-color decks, but they become a necessary evil the more colors you play.

That’s the full suite of noncreatures, meaning we just have to cover lands and we’re ready to battle!

Two pieces of great utility here. High Market is another sacrifice outlet, while Arcane Lighthouse gets rid of both hexproof and shroud, enabling us to steal what we need to steal. Indestructible was already not a concern, but when you can’t target something, it’s pretty hard to take it.

It’s hard not to put cycling lands in a mono-color manabase.

It’s not hugely advantageous, since we don’t go super wide in this deck most of the time, but it felt pretty free.

Some extra card draw will not hurt, and it’s not hard to get the City’s Blessing in Commander.

We literally have no other graveyard hate because I got really excited about the theme and ran out of room. Hooray!

Shivan Harvest will usually be enough nonbasic hate if it’s in play, but one other source couldn’t hurt.

Again, in mono-color manabases, this is nearly inescapable. Ramp it up!

Add 27 Mountains and we’re done! Total spend is $49.91, which means we’ve got 9 cents left to make a phone call from one side of my home office to the other. Nine cents doesn’t buy much these days, does it? I’m looking forward to finding something weird to do with mono-Green in the next iteration of this series, but for now, here’s the full Gadrak decklist! Come battle me (with kind words and constructive criticism?) on Twitter at @RagingLevine and send me your suggestions for future installments.