Commander is, by most estimations, the most popular way to play Magic. Everyone who plays puts so much time and effort into making their deck their own, like little reflections of themselves. Whenever someone describes the sick combo they pulled off, the special art they have, or the wild game they played in, the conversation will either start or circle back to that one little question: “So, who’s your Commander?”

Welcome to My Commander Is… A deck tech series digging into people’s favorite Commander brews, from casual tribal to full-on cEDH. This week, on the heels of M21’s release, we’re keeping it simple with Endrek Sahr, one of my favorite mono-colored creations. This more casual deck leverages Endrek’s ability to pump out Thrull tokens to fuel a variety of sacrifice outlets and build up an unstoppable board presence, or keep it under control until the deck’s explosive mana production ends the table in a single turn.

When looking at a deck, I like to examine what the focus is, and how the broad categories of the deck all feed into that. A deck’s wants and needs can inform it’s ramp, removal, card draw and everything between. 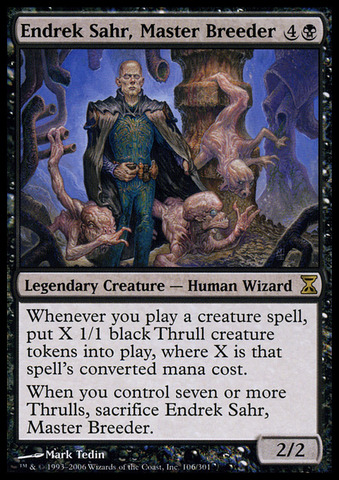 The focus of the deck, Endrek Sahr, falls into the category of 5-mana 2/2 that I find myself gravitating towards more often than I should. Whenever you cast a creature while he’s in play. you create X 1/1 black Thrull creature tokens where X is that creature’s CMC. The drawback for all these free tokens is that whenever you control 7 or more, you immediately have to sacrifice Endrek. To that end, there are plenty of ways to convert those Thrull tokens into other useful resources so you can keep Endrek around, while creatures fill many of the deck’s roles to allow you to generate the useful little guys. 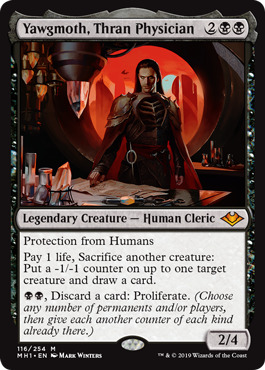 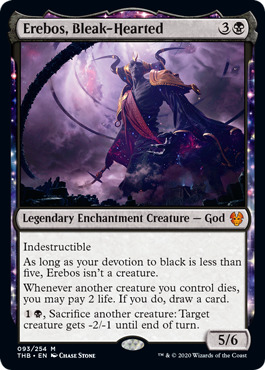 The deck’s backbone is its sac outlets, and it runs plenty. Newcomer Woe Strider joins Viscera Seer to allow us to sculpt the top of our deck. Yawgmoth, Thran Physician, Priest of Forgotten Gods, and Erebos, Bleak-Hearted all pull double duty as removal and card draw. Phyrexian Plaguelord only functions as the former, but is entirely free other than needing creatures to feed it. Ashnod’s Altar helps turn those excess Thrulls into mana, which can feed the game-ending spells Sidisi, Undead Vizier and Razaketh, Foul-Blooded are able to tutor up. 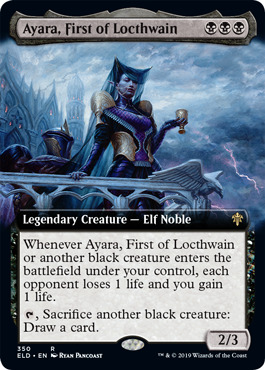 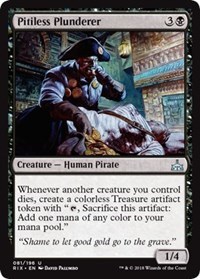 With all these creature tokens spawning into existence and being thrown through the meat grinder, we take advantage of the high number of ETB and dies triggers. Ayara functions as a way to ping our opponents with creatures coming in, while Zulaport Cutthroat, Blood Artist, Vindictive Vampire, and Bastion of Remembrance do the same on the way out (with Ayara functioning as yet another way to cash in creatures for cards, too!) Black Market and Pitiless Plunderer let you store up mana each time a creature bites it to fuel your late game finishers when you decide that enough incremental advantage is enough, or just to press the advantage by leveraging more cards than your opponents each turn. 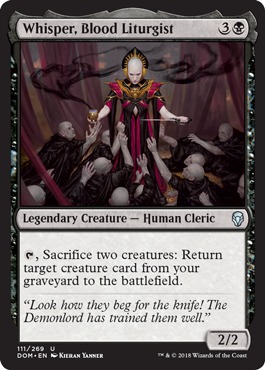 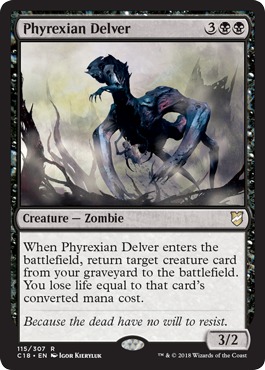 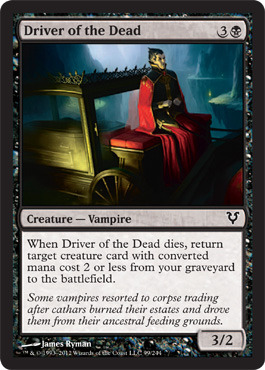 There’s a small reanimator theme in the deck as well, looking less to slam huge threats into play early and more to get repeated usages out of valuable ETBs like Gonti, Gray Merchant of Asphodel, Plaguecrafter, Thief of Blood, and the like. Leaning into the fact that Endrek loves creatures, most of the reanimation is stapled to bodies rather than spells. Apprentice Necromancer and Driver of the Dead are particular favorites, alongside Phyrexian Delver and Whisper, Blood Liturgist (more sac outlets!) 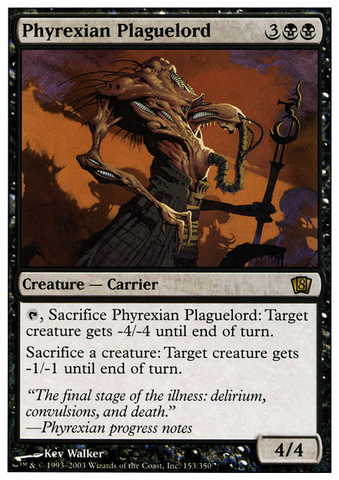 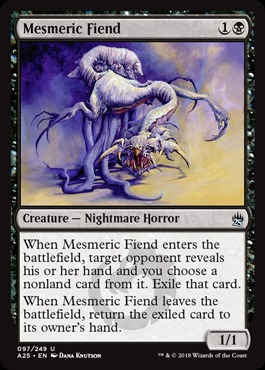 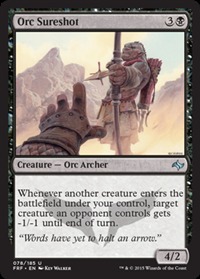 Now, you can’t just sit back and do your own thing. Every deck needs some amount of interaction for the rest of the table, and as with elsewhere, much of the deck’s removal and disruption is found on its creatures. Mesmeric Fiend can snipe problem cards from opponents hands (permanently, with a sac outlet on board) and Liliana’s Specter offers generic discard. Vampire Hexmage and Thief of Blood deal with planeswalkers, while Night Incarnate, Shriekmaw, Plaguecrafter, and Noxious Gearhulk are powerful one-shot answers to creatures. Yawgmoth, Phyrexian Plaguelord, and personal pet card Orc Sureshot are repeatable sources of removal as well when paired with the powerful token generation Endrek provides. Spells like Damnation, Erebos’ Intervention, and Mutilate supplement the creatures, giving you interaction without adding too many Thrulls to the board. 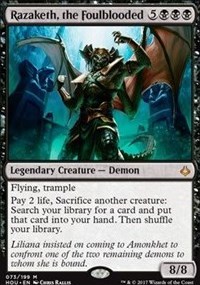 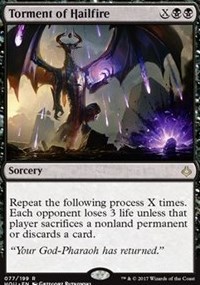 With Black Market, Plunderer, Altar, and the Cabal Coffers + Urborg combo generating piles of mana, Exsanguinate and Torment of Hailfire are shoe-in finishers. Sidisi and Razaketh help find them, as does Mausoleum Secrets (which doesn’t even need many creatures in your bin to find your X-spells.) Mono-Black standby Gray Merchant of Asphodel also makes an appearance as another finisher. Of note, though, is the general lack of tutors. While I play a few (I’m a firm believer that games must come to an end), I intentionally cut back on tutors the more casual I want a deck to play, and the more synergistic or on-theme they need to be to make the cut.

Put this all together, and you have a synergistic mono-colored deck with a surprising depth of options and a ton of ways to sacrifice your creatures for fun and profit. It’s a fun, off-beat commander that plays like a dream in a casual group. But enough about my deck, tell me about yours! If you’d like a deck tech written up, then send me the decklist and any thoughts you want included, any synergies you want called out, or other aspects highlighted. I want to see any and all decks, from fine-tuned cEDH powerhouses to gimmicky tribal decks using only art that features birds, and anything in between. Tell me, who’s your commander?

Share this
Tags: Commander, EDH, lee livingston, my commaner is